Voting has been happening in New Jersey for the majority of October. Voters should have received their mail-in ballots by Oct. 5., according to the state’s COVID-19 website.

Gov. Phil Murphy ordered in August that the November election be conducted primarily by mail because of the pandemic. The directive was not without its critics.

“If New Jersey residents can stand in long lines at Motor Vehicles, we should be able to wait 6 feet apart at the polls in November,” State Sen. Kristin Corrado, R-Passaic, said at the time.

The state GOP and President Trump’s re-election campaign also filed a lawsuit seeking to undo Murphy’s executive order. A federal judge nixed the lawsuit on the basis that the plaintiffs were not able to substantiate their claims — something foreshadowed when the judge rejected a request to stop mail-in ballots.

He came to the Camden County Election and Archive Center in Blackwood to drop off ballots for his family and to pick up a new ballot to replace the one he had lost.

He expressed disappointment about the mail-in election even occurring and shared a feeling similar to Corrado’s: “We’re allowed to do other things and in groups, we can’t go to a polling place.”

It’s not that New Jersey voters aren’t allowed to cast ballots in person. They can show up and cast provisional ballots. But to ensure that a voter doesn’t cast an in-person ballot and a mail-in ballot, the provisional vote will be counted second. Critics object that they won’t be able to vote on machines, as would happen in a non-pandemic year.

“There’s so much that can go wrong; we’ve seen it in other states,” he said. “I’m not sure how the checks and balances work with this.”

Taylor and his family were among 357,000 Camden County voters who were mailed ballots.

Checks and balances of mail-in voting

At the county election center, the warehouse where voting machines are normally stored has become a processing plant for ballots.

The sight is reminiscent of that scene from “Willy Wonka and the Chocolate Factory” in which factory workers are searching for a golden ticket for Veruca Salt. The difference is that workers here are looking for properly filled-out ballots to put on a pile to be counted.

Ballots come to the facility through the mail, after being collected from one of the county’s secure drop-off boxes or when dropped off at the center.

When WHYY News visited the ballot processing center on Wednesday, 190,000 had been returned. Officials are expecting a 75% voter turnout this year.

Election Commissioner Rich Ambrosino said they based their turnout projection on national polls. In a normal election year, he said, they would process and count about 60,000 mail-in ballots.

“We have these people come in at midnight; 12:01 on Election Day, and we open [ballots] all night,” he said. “Then in the morning, once the polls open at 6, the staff take them upstairs and count them.”

Ambrosino added that the process would usually take one day, but will take longer this year.

Because of the volume of ballots being received, election staff members have not had a day off in three weeks. Sixteen National Guard members have been sent to the center to assist in processing ballots.

Murphy’s order allowed election boards across the state a 10-day head start on counting ballots. To assist with the expected higher than normal volume, the county purchased what Ambrosino described as a “souped-up mail sorter” to help process ballots.

“It has a barcode reader, so it reads the voter ID barcode. It has a camera — takes a picture of the signature comparison — separates by town. It has an inking ability, so we could have it print the name of the town on it. It’ll time-stamp everything.”

Ambrosino said without the machine, they would not be able to meet the legal deadlines to certify election results. Before the envelopes are even opened, they must be scanned through the machine three times.

During the first pass, the voter ID is scanned, the outer envelope is time-stamped to mark when it was received and the envelope is cut open.

Your 2020 guide to voting in New Jersey

The general election will feel much like New Jersey's July primary. Here's what you need to know.

Staff will remove the inner envelope — the one holding the actual ballot — and place it in a batch of 50 by town before sending everything back to the high-speed scanner. This is done to make sure the voter ID barcode is recorded, in case it was missed the first time. It is during this phase where a picture of the voter’s signature is taken for verification.

The inner envelope is then scanned for a third time to make sure the computer marks it as received.

Even with the high-speed sorter, Ambrosino said, the process is still somewhat time-consuming because the ballots must be run through the machine three times.

“This machine runs basically 12 hours a day,” he added.

From there, the signature flaps are removed from the inner envelopes and placed in a tray that will hold 500 ballots. That tray is then taken to the front of a room where the ballots are opened — at that point, each ballot is anonymous. It’s the last phase before the ballot is taken to a room on the second floor to be counted.

All this assumes that there are no hiccups along the way, such as a signature that doesn’t match. If that happens, a “cure letter” will be sent to the voter offering a chance to respond to verify the ballot. If the voter does not respond, that ballot is rejected.

Voters can track the status of their ballots on the state’s election website.

The ballots are opened at a table by one Democrat and one Republican. Ambrosino said that’s by design, to preserve the integrity of the operation.

“You have both parties — two eyes — and it’s a hand-in-glove relationship,” he said. “Nobody has an upper hand, if you will.”

Ambrosino noted that the Camden County Elections Board staff “is a mirror image.”

“Every title, there’s one Republican and one Democrat in that title,” he said, adding that the two people (one from each party) do tasks together, from moving ballots by cart to entering vaults. One administrator from each party has a key.

“That’s actually not required by law,” Ambrosino said of the bipartisan arrangements, “that’s just always how we’ve done it here.”

The process in Camden County is like the one in other counties in New Jersey. Burlington County recently outlined a similar method for counting ballots. 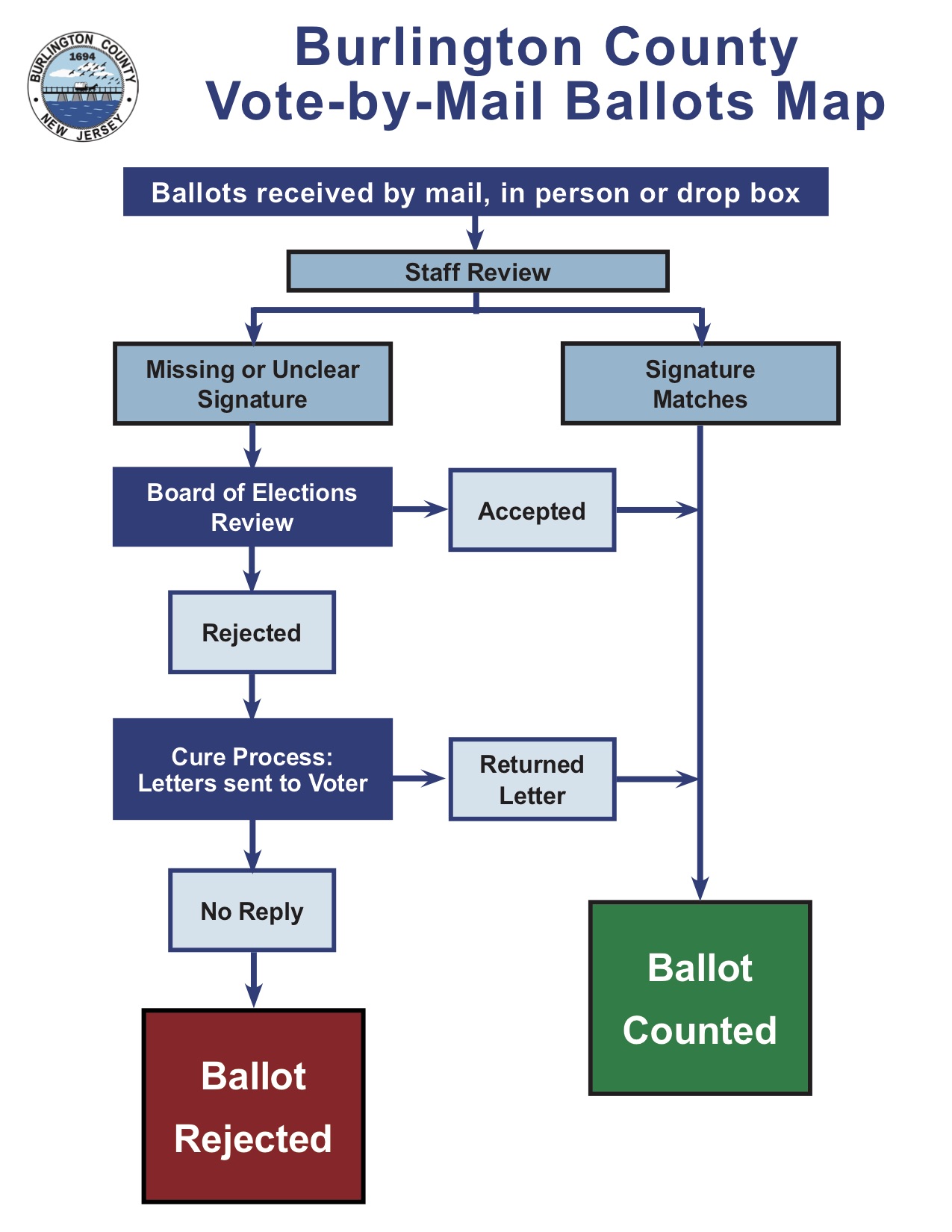 The county received a $2.9 million grant from the Center for Tech and Civic Life to cover the costs.

Like Camden County, most tasks in Burlington County are performed with oversight by both Democrats and Republicans.

“From an Intel friend: DNI needs to task NSA to immediately seize and begin looking for international comms related to Dominion,” Perry wrote to Meadows.

The justices issued an order that overturned a Feb. 16 decision by a Commonwealth Court judge that would have pulled the plug on the state's 2-year-old voting law.

How fake electors tried to throw result to Trump

Officials are digging deeper into the role that fake slates of electors played in Trump's effort to cling to power after his defeat in the 2020 presidential election.