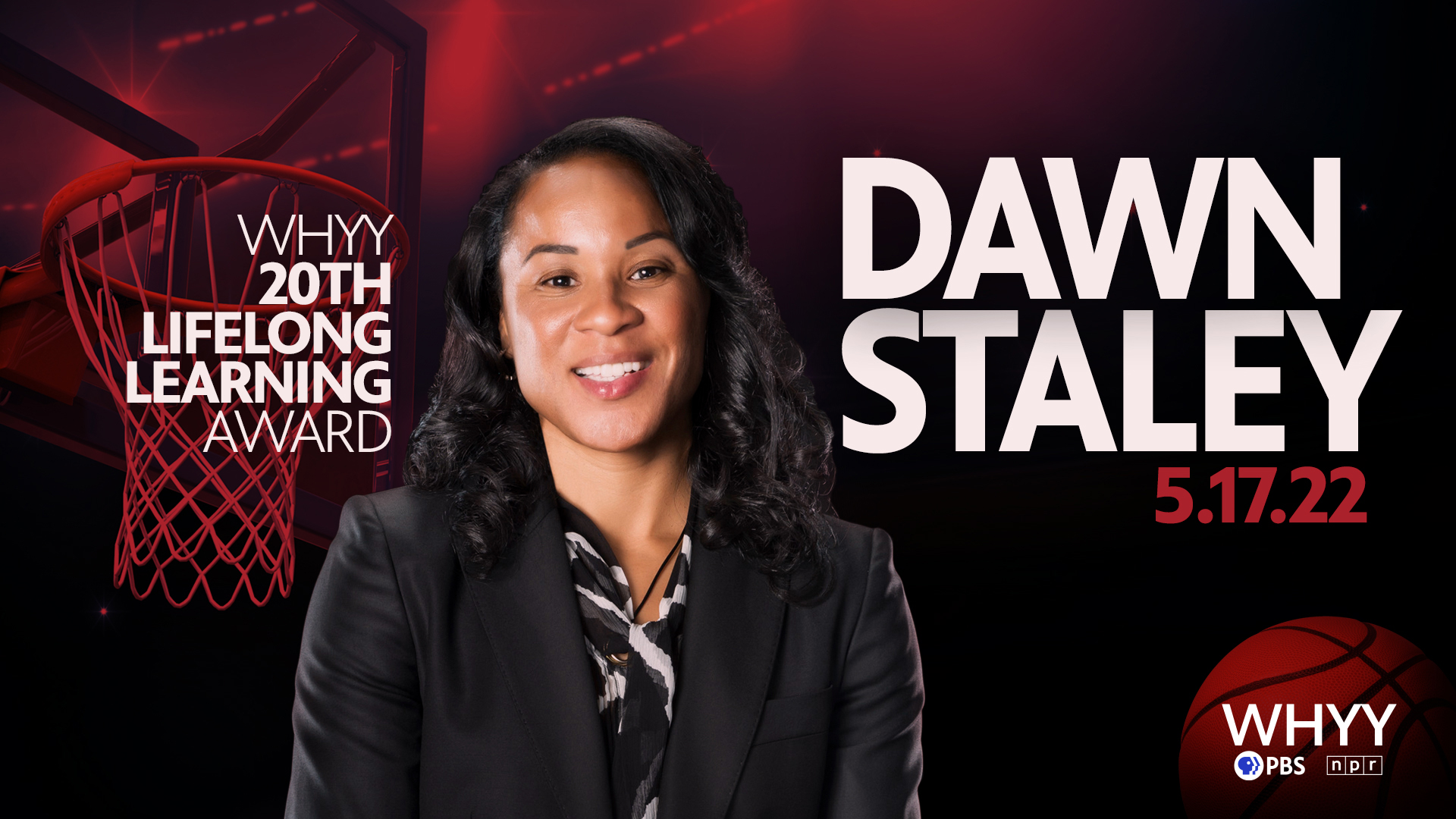 WHYY is delighted to announce that Basketball Hall of Famer and four-time Olympic gold medalist Coach Dawn Staley will be our 2022 Lifelong Learning Award recipient. We hope you will join us for this special virtual fundraiser as we honor Coach Staley’s illustrious career and contributions to sports and activism.

The highlight of this event will be the opportunity to experience a live interview of Coach Staley on Tuesday, May 17, 2022 at 5:15 PM by Terry Gross, host and co-executive producer of Fresh Air with Terry Gross, before the interview is broadcast on Fresh Air.

Proceeds from this event will support WHYY’s commitment to encouraging lifelong learning and advancing civic engagement through storytelling, education and community dialogue.

The WHYY Lifelong Learning Award recognizes an honoree who has demonstrated a passion for lifelong learning for themselves and for all those they can inspire. Previous recipients include President Joseph R. Biden, Dr. Anthony Fauci, Dr. Henry Louis Gates Jr., Gwen Ifill, Judy Woodruff and more.

Please contact Nathalie Bessette at 215-351-1263 or nbessette@whyy.org with any questions.

Coach Dawn Staley
Coach Dawn Staley is recognized as one of the most decorated participants in United States women’s basketball history. She is a four-time Olympic gold medalist as both a player and a coach and a five-time WNBA All-Star. She was inducted into the Naismith Memorial Basketball Hall of Fame in 2013.

Dawn Staley grew up in North Philly and graduated from Murrell Dobbins CTE High School. She was the head coach for Temple University’s women’s basketball team from 2000-2008. She is currently the head coach at the University of South Carolina, where she has twice been named National Coach of the Year. Her commitment to giving back to the community inspired the WNBA to create the Dawn Staley Community Leadership Award in her honor.

Terry Gross
Terry Gross is the Host and co-Executive Producer of Fresh Air with Terry Gross, which is celebrating its 35th anniversary as a daily NPR program. It is produced at WHYY in Philadelphia, where Gross began hosting the show in 1975, when it was broadcast locally. Her interviews with leading writers, actors, directors, musicians, comics, journalists, scholars and others now reach over 5 million people weekly, on 650 NPR stations across the U.S. and Europe.

Gross was awarded a National Humanities Medal from President Obama in 2016. Fresh Air with Terry Gross received a Peabody Award in 1994 for its “probing questions, revelatory interviews and unusual insight.”

THANK YOU TO OUR LIFELONG LEARNING AWARD SPONSORS