After receiving criticism from parents and district employees for directing school counselors to divide elementary students by the sex they were assigned at birth, and not their gender identity, for classes on puberty, Central Bucks School District has made all of those classes virtual and optional.

The “Human Growth and Development” classes teach about human growth, adolescent physiological and emotional changes, and the human reproductive system. One family told WHYY News that their nonbinary child was denied their choice of health class this semester by district administration. Alyssa Marton, Director of Pupil Services, told the family that their child had to go to the classroom that coincided with the sex they were assigned at birth, not their gender identity. The Human Growth and Development classes were then canceled for all elementary students at that school.

The virtual lessons will be available from May 16 to June 10, and will take approximately 30 to 60 minutes, according to the district. 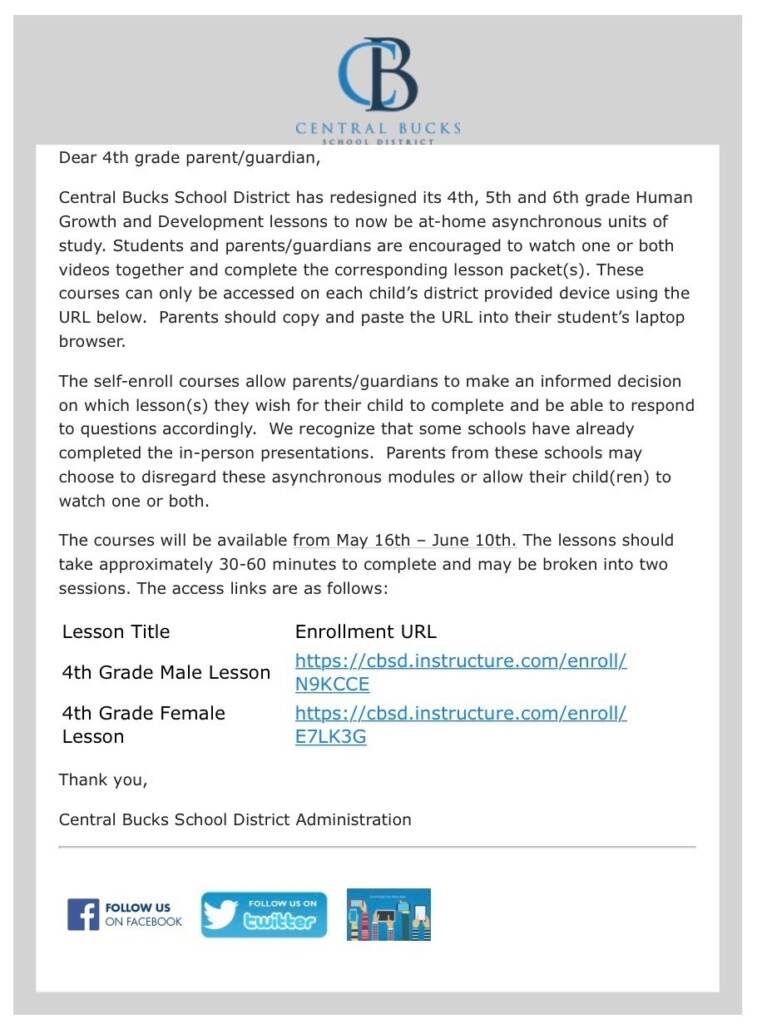 “The self-enroll courses allow parents/guardians to make an informed decision on which lesson(s) they wish for their child to complete and be able to respond to questions accordingly,” Lucabaugh said.

Karen Smith, school board member, disagrees with the decision, one that she said she had no part of. She said she thinks it is moving the district backwards, rather than towards inclusivity.

“Best practices for human growth and development curriculum is actually co-ed teaching … I don’t think [this decision] is more inclusive. In fact, It sort of excludes everyone. It sends everyone home to do it by themselves,” said Smith.

One school counselor who wished to remain anonymous, in fear of retribution from the district, said they’re concerned this move will make it more difficult for kids who want to access the information, especially those with working parents.

“There are issues of equity,” they said. “When we think about kids who maybe don’t live in homes that provide them an opportunity to learn in a virtual asynchronous environment with an adult who can support them.”

This counselor taught courses on social and emotional learning in a Philadelphia school, prior to coming to Central Bucks. They said these kinds of lessons work best with teachers who are qualified and trained in the content.

They said it’s highly interactive, at its best, and doesn’t lend itself to the “asynchronous module.”

“I am surprised that we are taking any in-person content and moving it to a virtual model when the loudest cries were for students to be in school buildings,” they said, referring to the long battle from many district parents who wanted schools opened earlier after the start of COVID-19.

Some employees and parents are concerned the decision to go virtual and optional on a topic many view as essential, is a slippery slope.

The counselor said they hope the district doesn’t make lessons on slavery in the United States or the Holocaust, virtual and optional.

“If we create a situation in which we allow people to talk about facts as controversy then we’re not really teaching our children anything,” they said.

A flurry of moves by Central Bucks School District leaders has ignited another battle over civil rights for the LGTBQ community in Bucks County.

Superintendent Abe Lucabaugh and Dana Hunter, CBSD school board president, wrote a lengthy email to all district parents on Tuesday. The email acknowledged the long list of allegations about the district targeting LGBTQ students and censoring books with LGBTQ related content, including a note on their HGD decision.

“This year, we received requests for students to engage with this curriculum according to the sex that they identify with, rather than the sex they were physiologically born. In an effort to be as inclusive and respectful of every student and family, we made the decision to devise a new way of delivering this important curriculum. We understand that some of our elementary schools had already begun the curriculum before we made that decision, and we do apologize for that; however, when we are made aware of a need, we have an obligation to address it. Moving forward, we have provided families with details of how they can access this curriculum, and we will continue to seek ways to ensure that we are meeting the needs of all our students and their families.”

Daniela Burg is a parent of a sixth grader, Ethan, at Bridge Valley Elementary School in Central Bucks School District. Her family moved to the area about 10 years ago, for the school system. Her son never received his in-person class on Human Growth and Development this year. Some elementary schools paused the classes after the directive from administration to divide students based on the sex they were assigned at birth.

“It’s just downright alarming what’s happening in our school district, a district that was once revered, and highly sought after, is now becoming literally a national joke,” Burg said.

Burg said she wants her son to be in health classes with all genders, to grow up to be the kind of kid who doesn’t laugh at his peers when they get their period.

“As he gets older and becomes involved in relationships and becomes sexually active, I don’t want him to be queasy about these sorts of things. It’s just a natural part of life.”

Reggie McNeil, the school district’s chief operating officer, will serve as secretary of general services, responsible for state buildings and vehicles, as well as purchasing.

Philly school board asks City Council for millions in funds: ‘We need you’

The board also asked the city at its biannual meeting to provide parking for teachers near some schools to address safety concerns.

Forty nonprofits and counting have joined the Kids’ Campaign, a nonpartisan effort focused on centering the voices of children and families in Philly’s mayoral race.