Are you on the front lines of the coronavirus? Help us report on the pandemic.

Joanna Nieuwdorp and Ikeem Wilson jumped at the first opportunity to enjoy breakfast from Sulimay’s again, even if the meal wouldn’t include sitting in its cozy booths.

Fishtown’s old-school diner, located on the corner of Girard Avenue and Berks, closed on March 17 and moved into a donations-only mode until the beginning of May. By then, the couple really missed their favorite weekend breakfast of pancakes, grits and omelets.

“That weekend we went ahead and ordered breakfast from them both days because it was just so good the first day, that we’d wanted to have it again,” Nieuwdorp, a 27-year-old sociologist, said.

Sulimay’s lovers rave about its comfort food. But there’s more to it than its breakfast specials and its genuine kitschy vibe, rare in the ever-more gentrified Fishtown. Over its 18 years of existence, first under the ownership of Lucretia Sulimay, and then Chad Todd, who bought the diner from Sulimay in 2016, the unpretentious eatery has become a Fishtown institution.

And in difficult and divisive times like the past week, Nieuwdorp and Wilson said Sulimay’s represents a space of unity.

“They’ve been pushing their ability to help as much as they can, since the protests have been going on,” Nieuwdorp said.

The ongoing protests of George Floyd’s killing by police in Minnesota have changed neighborhood dynamics across Philadelphia as people take to the streets to express opinions often kept quiet. Fishtown experienced a painful reminder of racial divides Monday when a group of white men armed with baseball bats threatened a group of protesters demonstrating against police brutality and Floyd’s killing. Officers from the 26th District police station didn’t arrest them, precipitating daily rallies in front of the precinct on Girard Avenue.

“I didn’t know I had neighbors like that,” said Wilson, a 30-year-old software developer, referring to the men holding bats.

“There’s like a them-versus-us type thing going on right now. Them being the people who kinda have been here for quite some time, or their whole life? And then there’s us, who have like… we just moved here, we didn’t know that you didn’t like us that much.”

The interracial couple never felt that divide when dining at Sulimay’s, even though they recognized that the neighborhood old-timers enjoying the food alongside them looked different from them and may vote differently, too.

More recently, after the coronavirus pandemic hit and put many of their neighbors out of work, the couple has watched admiringly as the diner began offering free meals and food for anyone in need. 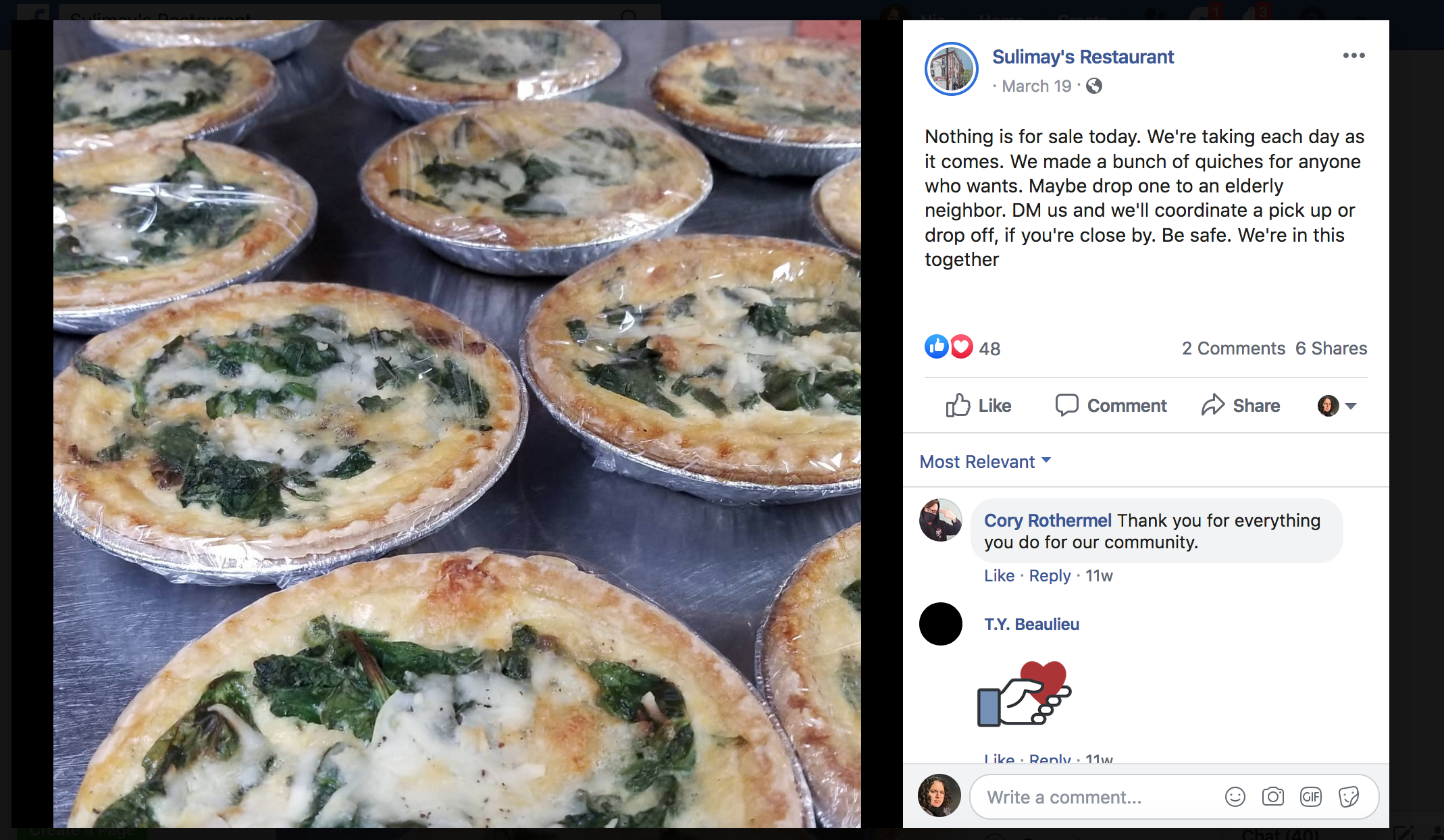 Since closing its doors by mid-March, Todd has worked with other local businesses and restaurants to donate meals and other necessities to elderly people, hungry neighbors, and families from the neighboring Penn Treaty School.

In May, Sulimay’s started selling breakfast again, from Friday to Monday. The diner began doing pop-up burger nights and dinners for special occasions like Mother’s Day and Memorial Day weekend.

But on Monday, the diner went back to donation-only mode again. Todd, who owns the business and the building, has, since that day, been feeding people for free.

Todd and his girlfriend, Christie Keith, recently moved into the apartment above the diner. From Monday to Wednesday, he sat outside of the restaurant, which is right in front of the police precinct, watching the rallies while making donations.

“If something breaks, I’ve got insurance. I’m not going to hide,” Todd said.  “We’re here 24  hours. I sleep above the restaurant, I come down and I do what I can to help people in need, that’s it.”

Todd doesn’t want to feel anyone unwelcomed at Sulimay’s. He takes pride in everyone feeling at home there. Which is why he has chosen to keep his opinions to himself. On Wednesday, he posted a photo of protesters with a heart on Facebook, and on Tuesday, a photo of the police precinct saying “Stay safe, Fishtown! We don’t need any more violence.”

With small local businesses struggling to keep afloat all across the county, Nieuwdorp and Wilson said if they had to pick a business that it would be hard to live without during these times, it would Sulimay’s.

“It’s really shown itself as a pillar of the community,” Nieuwdorp said. “They’re still attempting to push through this and support the community to the best of their ability.”

The head of an influential Pennsylvania charter school advocacy group was ousted after criticizing the ongoing civil rights protests on social media.

When Lucretia Sulimay bought what was then a neighborhood restaurant in March of 2002, some longtime Fishtowners weren’t happy about it.

Gentrification was pushing white working-class people out of the neighborhood, and bringing a wealthier mix crowd in. Sulimay, a New Jersey native and graduate from the Culinary Institute of America, was seen as an outsider, she said. Sulimay said people complained about her changing the menu, which included homemade pancakes instead of pancakes from a mix, and potatoes cooked in a different way than other diners served.

“I had a lot of people just tell me that … I was never going to succeed there because I was, you know, doing everything wrong,” Sulimay said.

But Sulimay set herself to create a place where all Fishtowners felt at home. She said she was always out front greeting people, introducing people who she thought might connect with each other, and just trying to make everyone happy. She said she wanted what she calls a Cheers mindset, without the alcohol.

And it worked. Suddenly, she said, everyone was talking with each other.

Karen Banos, a 62-year-old professional violinist, moved to Fishtown in 1981. When she moved in, Girard Avenue was still “pretty sketchy” and “really white,” she said. But in Sulimay’s she’s always found a mixed and welcoming crew. Through the years, the diner has become a second home.

Banos said right now, with most of the stores boarded up, Sulimay’s is providing a real service to the community, subtly bringing everyone together.

“Sulimay’s represents what we all love about Fishtown, which is that it’s a small town within a big city,” she said. “And now during the pandemic, I mean, what he’s been doing for the community is just crazy outrageous.”

When Sulimay decided to sell her diner, it took her some years to find the right person. She had survived cancer, the neighborhood was changing again, and she says she was too tired to start all over again. But she didn’t want Sulimay’s to change.

Todd had worked for Zahav and Osteria before meeting Sulimay through a common friend. He helped her with social media first, then stepped into the kitchen. But Sulimay had a chef and Todd decided to move on. Three years later, in 2016, the two reconnected over dinner. Sulimay told him the diner was for sale.

“By the time I got home, he had texted me, he’s like, ‘call me tomorrow.’ So I called him and he’s like, ‘I want to buy the restaurant,’” Sulimay recalled.

Todd says he has put his heart and soul into the diner. Three years into his tenure as owner, Philly Mag’s Best of Philly chose Sulimay’s as the Best Diner Breakfast. Before the pandemic, he employed 10 people and served more than 200 people breakfast on a regular Sunday.

It wasn’t difficult for Todd to decide to start cooking meals for people in need, instead of trying to make a profit when COVID-19 restrictions kicked in, he said.

“Business was down that week. We had excess food; we had access to things that people were not having access to,” the chef said.  “There’s a lot of people in need. I had the means to help. I’ve grown up poor, I know what it’s like to struggle.”

“It’s not just me, it’s everybody,” he added. “I’m just cooking, you know,” alluding to the donations he’s getting from his customers and friends.

Brooke Hoffman, co-president of Friends of Penn Treaty School, sees Sulimay’s as a bridge in the community.

“I think there are, honestly, very few places in the changing Fishtown where Penn Treaty families feel like they belong or that they’re welcomed,” she said. “And Sulimay’s seems to do that really effortlessly, but at the same time, intentionally,” Hoffman said.

“In a time that is very isolating, they are kind of letting people know of needs and how they can contribute, and then they’re also meeting direct needs of a family,” Hoffman said. “So people that wouldn’t necessarily know each other, or ever have contact with each other, or even think of themselves as neighbors — Sulimay’s is kind of fostering that neighbor relationship, which is really beautiful.”

That Philly vaccine mandate for indoor dining? Business owners mostly like it, but they have questions

The new rules take effect on Jan. 3. But business owners are wondering how to verify vaccine cards are legit and handle issues that arise.

On the first day of outdoor dining, Philly bubbles with excited customers

On Friday, neighborhoods from Old City to Northern Liberties to Baltimore Avenue were buzzing with diners excited to emerge from coronavirus hibernation.