The head of an influential Pennsylvania charter school advocacy group has been ousted after making a social media post about the ongoing civil rights protests in which she said: “these protesters disgust me. All lives matter!”

She later called her comments “insensitive and inappropriate” and said she meant to imply that the looting and violence that had occurred disgusted her.

Ana Meyers, head of the Pennsylvania Coalition of Public Charter Schools, posted — and then deleted — a statement on her personal Facebook page in which she called the protests spurred by the killing of George Floyd “not okay.”

Meyers’ original post, from Saturday May 31, linked to an emergency alert that mentioned “violent protests” in Philadelphia. 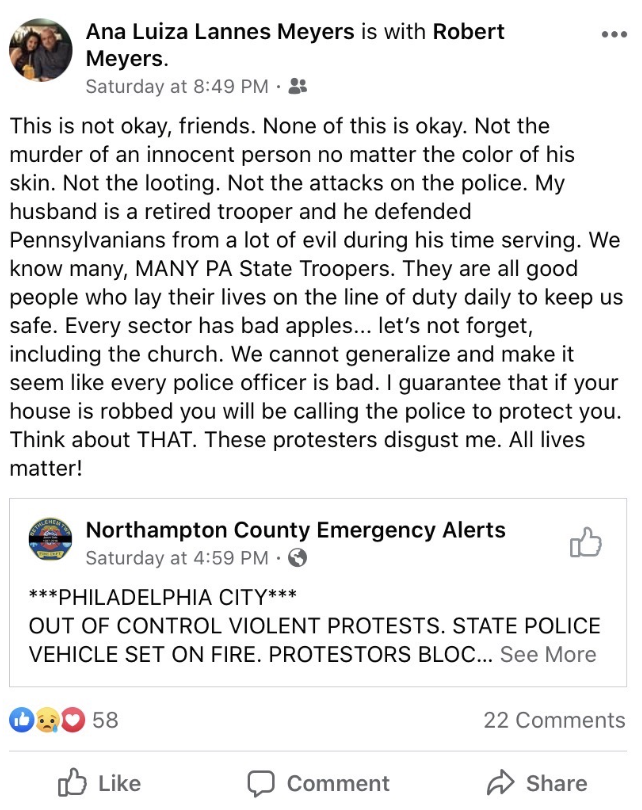 On Friday, when Keystone Crossroads contacted Meyers, of Mechanicsburg, Pa., to ask about the post, she said that she’d removed the original statement and posted an apology. 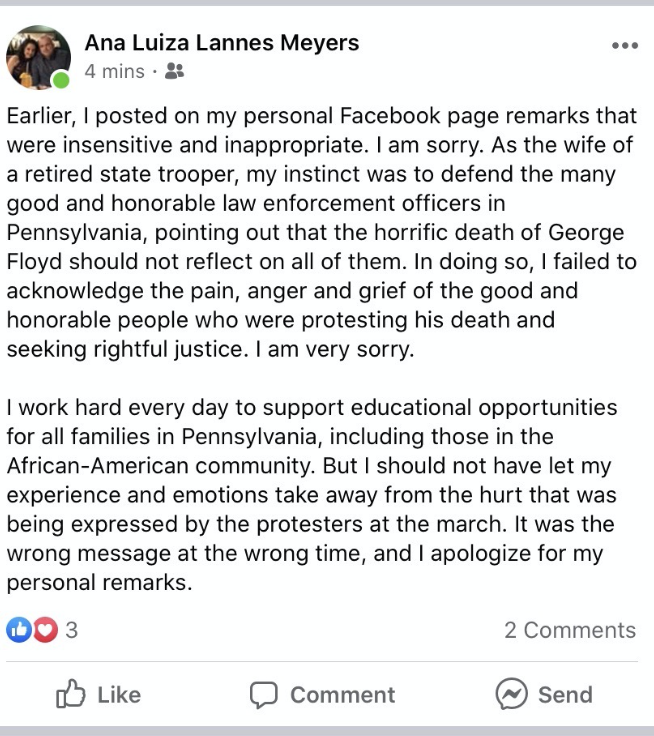 She also said that she meant only to suggest that the violent protests disgusted her — not the majority of the protests, which have been peaceful.

“I support the protest,” said Meyers, who is Hispanic and an immigrant. “I support the Black Lives Matter movement. What I do not support is looting and destruction.”

“I did not mean to insinuate that I don’t support Black Lives Matter,” she added. “That never crossed my mind.”

Over the weekend, Mastery Charter Schools, the largest chain of charters in Pennsylvania, sought to distance itself from Meyers.

We condemn the remarks of Ana Meyers. She does not speak for Mastery Schools. #blacklivesmatter

On Monday, the board of trustees of the Pennsylvania Coalition of Public Charter Schools released a statement explaining the ouster.

“We have determined that new leadership is in the best interests of our member schools and the families they serve across the state. We thank Ana Meyers for her tireless efforts over the past three years to create more educational opportunities for students in Pennsylvania, especially minority and economically disadvantaged students, in public charter schools.”

Sharif El-Mekki, a longtime charter-school principal who now runs an organization dedicated to increasing the number of Black male educators, had been among those who said Meyers’ apology would “fall on deaf ears.”

“This is why ‘charter schools’ in and of itself are not enough,” El-Mekki said. “The fact that people demanding to not be murdered in the streets by police disgusts her, tells you that anything Black families rail against short of murder will also disgust her.”

PCPCS is the primary lobbying group for the state’s charter-school sector, which educates over 140,000 students statewide.

On Friday, the coalition’s vice president, Larry Jones, who is Black and runs a charter school in Philadelphia, said Meyers’ original post was fueled by “emotion and reaction.”

“I’m seeing that all over the place,” Jones said. “I want to get past the post and into true systemic reform and change.”

Philadelphia’s Board of Education voted in April not to renew Daroff and its neighboring sister school Bluford’s charter agreements.

West Philly charter school to close immediately: ‘A failure of children by adults’

Daroff Charter School, a K-8 school, will close immediately, as part of an agreement signed with Philadelphia’s school board Friday morning.

2 Philly charter schools delay start of classes, 1 could close before then

The schools did not give parents a reason for the delay, but School District of Philadelphia administrators have expressed concerns about facility conditions and staffing leve