Jessica Ivry has been struggling for the past four years with a decision: the fate of her final frozen embryo — the last remnant of the in vitro fertilization process that led to the birth of Ivry’s 3-year-old daughter.

“I think of it like, this is a full sibling to my daughter,” Ivry said. “And wouldn’t it be amazing if I had another child, because she could have a sibling?”

Ivry always dreamed of having a small brood of children. But as a single mother in her mid-40s, turning that final embryo into another baby isn’t all that practical, either physically or financially, she said.

“I don’t know how it could happen — but it’s really sad to me to think of having the fertility clinic discard the embryo,” Ivry said. “I don’t know what to do. I’m pretty stuck.”

Studies have found that 40 percent of fertility patients struggle, as Ivry does, to decide what to do with what are called “remaining embryos” — the ones that are left over after the in-vitro fertilization process is complete. Other research has found that up to 70 percent of patients delay the decision five years or more.

“It’s a very common question,” said Pamela Kelberg, a psychotherapist who specializes in fertility issues. “It can bring up powerful moral feelings as to what these embryos mean to them.”

It’s a question that fertility patients first encounter in the form of pre-IVF paperwork, which details the four options for what’s known as “embryo disposition:” donating the embryo to another couple; donating it to science; disposing of it; or keeping it frozen. 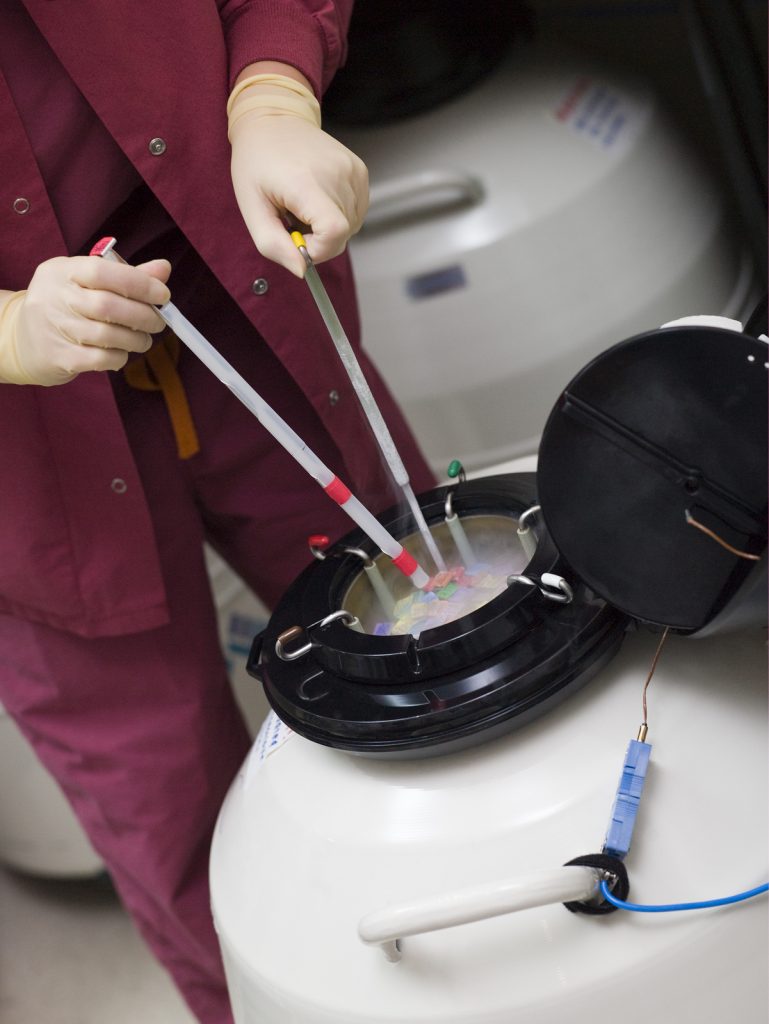 Eric Widra, medical director at Shady Grove Fertility Clinics, said he’s seen patients agonize over these options — especially once they’re on the other side of the IVF process.

“They’re torn because they feel a certain responsibility to these embryos,” Widra said. “And they often have very strong mixed feelings about what they should do.”

Those feelings are forged, in part, through the intensity of the IVF process, which represents a huge investment of money, time, emotion and pain, Widra said. But the ambivalence also has to do with how individual patients conceive of their own embryos.

“I think everyone struggles a bit with how to think about these embryos,” he said.

That includes the wider culture. Thanks in large part to the abortion debate, embryos have come to signify the dividing line between what counts as life, and what doesn’t.

That distinction gets even more complicated for fertility patients, according Anne Lyerly, a bioethicist and obstetrician at the University of North Carolina’s medical school. Around 2005, Lyerly began interviewing fertility patients about what they were deciding to do with their frozen embryos. She found that although patients’ views on the embryos ran the gamut, there was a certain sentiment they all shared.

A  lot of fertility patients felt the available disposition options didn’t reflect that significance, she said — whether they thought of the embryo as living or not. So they started suggesting alternatives for disposing of embryos.

Respondents also came up with an idea later named “compassionate transfer,” in which embryos that were to be disposed of would be implanted back in the woman’s body at a time when she was least likely to conceive, and eventually flushed from the body.

It was an option that Lyerly found one in five women would be interested in — the same percentage of women who said they’d be willing to donate embryos to other patients or couples.

“That suggested to us that if these kinds of accommodations could be made available to women, then people might not have as hard of a time thinking about saying goodbye to their embryos as they do now,” she said.

Though a handful of groups are working to improve the availability of alternative options, they remain mostly out of reach.

In the meantime, an estimated 600,000 to a million frozen embryos have accumulated in cryogenic storage centers across the United States. Many will remain there for years, or even decades.

For some fertility patients, the frozen embryos serve as a kind of insurance policy, said Kelberg, the psychotherapist — a backup in case they change their minds.

“It can also be a way of deciding but not deciding,” Kelberg said. “The embryos are in limbo, and the decision is in limbo, but it’s a decision at the same time.”

How the placenta evolved from an ancient virus

After IVF, what happens to remaining embryos?

More segments from Between Life and Death

After IVF, what happens to remaining embryos?

‘Revelations in Air’ and the power of smell

Author Jude Stewart on smell, the least understood of our five senses. And, what we know so far about Covid-19 and loss of scent...some people aren't bouncing back.

Users report that psilocybin restored their sense of smell. We ask scientists what could explain this seemingly healing effect.

How a Broadway superhero faced a life-threatening diagnosis

When Jake Odmark was diagnosed with Crohn's disease, his career took a back seat. But accepting the diagnosis led to a more stable future.