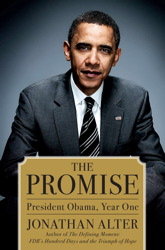 The first year of the Obama administration was nothing if not eventful, with the financial crisis the new president inherited prompting an unprecedented series of bailouts and stimulus package. Obama also ordered a surge in troops to Afghanistan and moved to extract troops from Iraq, responded to terrorist threats and attempted to close Guantanamo Bay’s prison, and, to top it all off, pushed a massive and massively controversial health care reform effort over the resistance of his own staff. On today’s Radio Times, we’ll talk to Newsweek senior editor JONATHAN ALTER about his new book, The Promise: President Obama, Year One. We’ll also get his take on the gusher of news since the ink dried on his book, with Obama struggling to limit the political damage of the BP oil spill fouling the gulf, momentum to repeal Don’t Ask Don’t Tell, and what this spring’s primary election results portend for November.

President Joe Biden and Russian President Vladimir Putin will speak in a video call Tuesday, the Kremlin said, as tensions between the Un ...

Local members of the Liberian community and immigration attorneys say thousands of people could miss out if the Dec. 20 deadline is not extended.

No other governing body seems too eager to follow suit with the sorts of actions that would come with a real financial hit.