Back when Christina Roberto helped patients with obesity trying to lose weight, she had a simple rule of thumb: Cut out soda.

“Those are products with zero nutritional value,” said Roberto, a clinical psychologist and epidemiologist. “So that’s exactly what we would target first. Those drinks are heavily marketed, they’re cheap, they’re everywhere.”

Now a researcher and assistant professor of medical ethics at the University of Pennsylvania’s Perelman School of Medicine, Roberto led a study released Tuesday that suggests Philadelphians are buying less soda as a result of the sweetened-beverage tax. Published in the Journal of the American Medical Association, the study by Roberto and her colleagues found that sales of sugary drinks dropped by 38% in the Philadelphia region in the year after the tax went into effect. 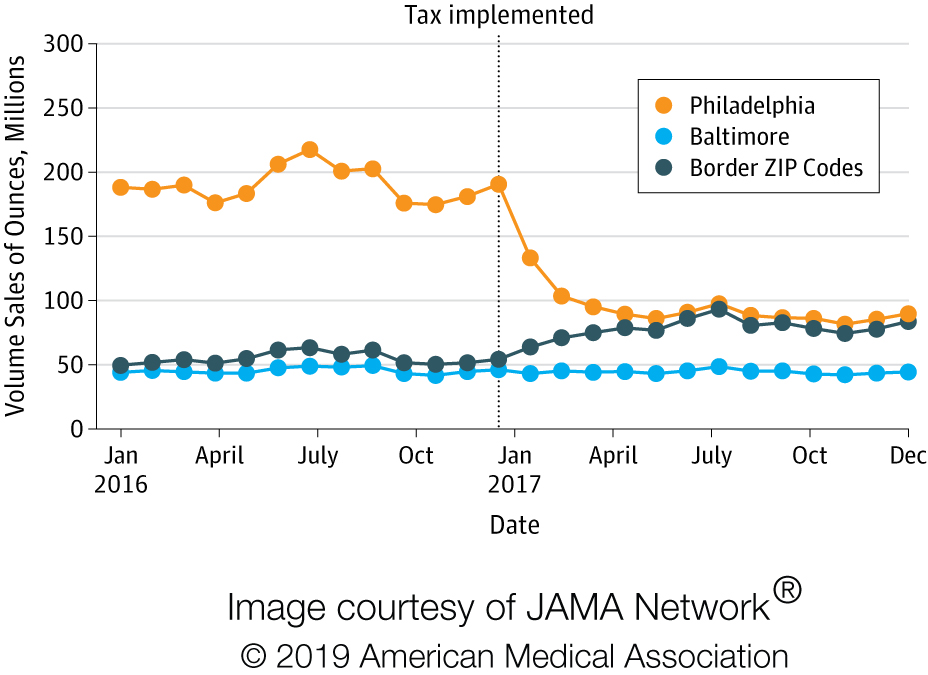 The researchers compared the sales of sweetened beverages at major retailers — supermarkets, mass merchandisers such as Walmart and Costco, and pharmacies — in the year before the tax to the year after. They also compared sales in Philadelphia the year after the tax was implemented with sales during the same time in Baltimore — a city with similar demographics and sugary-drink consumption as Philadelphia where no tax went into effect.

Because the sweetened-beverage tax of 1.5 cents per ounce is levied on the distributor, the tax has an impact on consumers only if the retailer passes the price increase on to them.  Researchers found that in the year after the tax, prices of taxed beverages in Philadelphia increased by an average of 1 cent per ounce relative to the price change in Baltimore, indicating that most of the tax was being passed on to Philadelphia consumers.

Major retailers sold 51% fewer sweetened beverages in Philadelphia in the first year after the tax was implemented in 2017. Because many anticipated that a price hike in Philadelphia might mean shoppers would buy soda in neighboring counties where there was no tax, researchers measured sales in Bucks, Delaware and Montgomery counties during the same time. They found that sales increased there 12%, offsetting the Philadelphia numbers and resulting in an adjusted 38% decrease for the region overall.

“I’ve studied a lot of things, and this to me — a tax on sweetened beverages — really offers some hope,” said Roberto. “This is some of the most compelling data on a way to get people to buy fewer of these drinks that we know are unhealthy.”

The Philadelphia tax, championed by Mayor Jim Kenney has withstood a number of legal and political challenges. The mayor’s office projects that the tax will have brought in more than $194 million by June 30, the close of the current fiscal year. Revenues will go to expanded pre-K and the Rebuild initiative, designed to renovate and build recreation facilities and green spaces throughout the city.

Critics of the tax argue it affects employment in the beverage and related industries. Special interests for and against the tax spent more than $2.6 million in lobbying City Hall in 2018 in efforts to repeal or defend the tax.

The study did not look at the effect the tax has had on employment, although it did find that overall sales for those retailers declined 8.1% in the combined sales of beverages, food, and household products. This study excluded sweetened-beverage sales at restaurants and independently owned stores, though Roberto said the team of Penn researchers has analyzed sales at those types of retailers and hopes to release that research within the year.

Philadelphia was the second city in the country to implement a tax on sweetened beverages, after Berkeley, California. Reports from Berkeley suggest that its 1 cent per ounce tax on sugar-sweetened beverages led to about a 12% decline in purchases. The entire country of Mexico has also levied a tax on all added sugars in any product, which led to about an 8% sales decline. Roberto guessed the more dramatic drop in purchasing in Philadelphia compared to Berkeley was due to a higher baseline consumption to begin with and higher rates of poverty, where a price increase would make more of a difference.

This particular study looked only at sweetened-drink sales — not consumption. Though studies that measure sales are more objective than self-reporting from purchasers, they are more limited in gauging the overall health impact of a tax like this.

“Who’s consuming less really matters, and the sales alone don’t necessarily tell you who’s consuming less,” said Kristine Madsen, who directs UC Berkeley’s Food Institute and has been researching the soda taxes in the Bay Area since the nation’s first tax was implemented in Berkeley in 2014.

“If the person who only consumes [sweetened beverages] once or twice a week is dropping, they’re not the ones that I’m actually worried about developing diabetes,” she said.

Research on how beverage taxes affect consumption is less conclusive. Madsen’s research out of the Bay Area found a 51% decline in self-reported sugar-sweetened beverage consumption in low-income neighborhoods over the first three years of Berkeley’s tax. But another report found no decline in sugar-sweetened beverage intake among Berkeley residents about one year after the tax.

In Philadelphia, a study out of Drexel University found consumers here were 40% less likely to drink soda in the first two months after the tax.

Madsen commended Roberto and her team’s work but cautioned that the health impacts of such taxes are still inconclusive.

“The other long-term things we need to figure out are whether or not people substitute other unhealthy things, let’s say candy bars,” she said. “If you’re getting rid of soda, but you’re consuming a lot of highly sugared food, that’s not necessarily going to make for a healthier population, so we do need to track that over time.”

This article has been updated to clarify projected soda-tax revenue through the end of the current fiscal year.

For the next two weeks, restaurants may accept a negative COVID-19 test from the past 24 hours in lieu of proof of full vaccination.

The mandate will start on Jan. 3, 2022. Restaurant employees will also have to show that they are vaccinated.

Announced with less than 24 hours’ notice, even backers see the new rules as another example of the city reacting to the virus, not getting ahead of it.