Philadelphia Register of Wills Tracey Gordon is calling on the city and state to do more to help residents struggling to get legal ownership of homes and says that solving the city’s quiet tangled title crisis would help quell a louder calamity: gun violence.

Gordon, whose office handles title issues, links the two issues using research that showed crime decreases in areas when homes in disrepair are fixed. But without a clear title granting legal ownership of a property, it is difficult to finance repairs with bank loans or public programs such as the Philadelphia Housing Development Corporation’s Basic System Repair Program, an initiative that awards grants to correct electrical, plumbing, heating and roofing emergencies in eligible owner-occupied homes.

Jack Stollsteimer said there is a "high probability" that responsive gunfire from police officers is what killed an 8-year-old girl after a Friday night football game.

The  University of Pennsylvania study cited by Gordon found that when the city’s repair program funded fixes for just one house on a block, crime on that block was reduced by nearly 22%. Amid a historic surge in gun violence, Gordon said the research indicates that increasing the number of clear-title homes eligible for repair could ultimately reduce violence.

“This may be the best non-policing solution to reducing crime currently available to us,” Gordon said in a release.

According to a recent study from the Pew Charitable Trusts, Philadelphia has more than 10,000 tangled titles affecting real estate worth more than $1.1 billion. 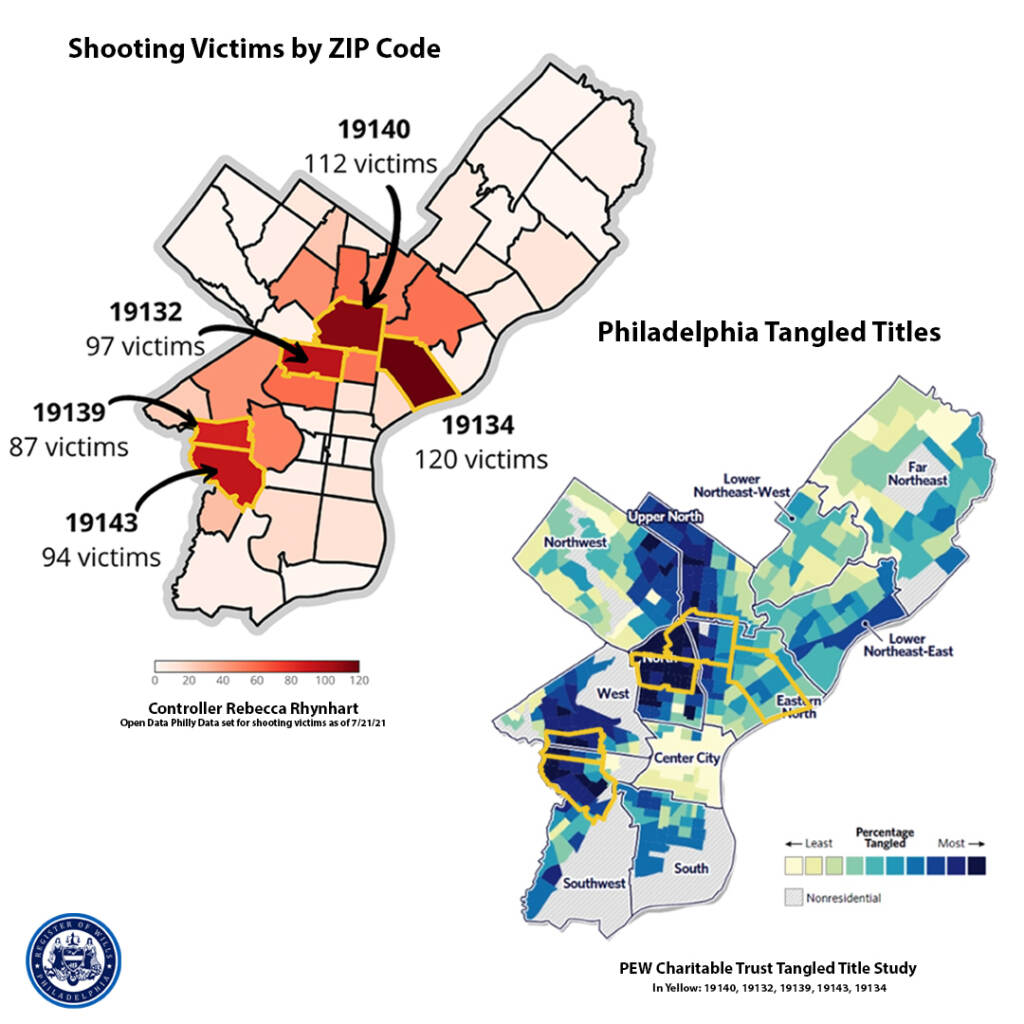 (Graphic by Office of the Register of Wills)

Experts recommend giving yourself space and time to feel the sadness and outrage as you look for a path to recovery from the losses.

Low-income, majority Black neighborhoods also tend to be the most impacted by gun violence. What’s more, homicide is the leading cause of death for young Black men in Philadelphia who are between the ages of 15 and 34, according to the city.

“That’s a correlation that we all can draw. Facts don’t lie,” said Gordon.

Gordon said more public money is needed to help people navigate the legal issues that come up when the occupant of a particular home is not the legal owner of that property. She said residents with a tangled title also need help paying for the legal process necessary to untangle a property title, which can cost upwards of $10,000 or more.

“We are in a crisis and we need all the support we can,” said Gordon.

A spokesperson for Mayor Jim Kenney did not immediately respond to a request for comment.

The Philadelphia District Attorney is urging criminal defendants to avoid arrest by voluntarily coming to the Criminal Justice Center next week to get a court date.

Over the past month, the number of shooting victims citywide has dropped 11%, officials said. Operation PinPoint zones saw a more dramatic decrease.