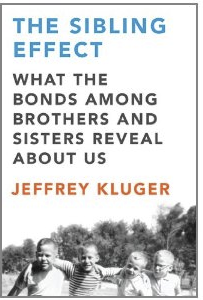 Whether you have brothers or sisters or are an only child, sibling relationships, or lack of them, have played a powerful role in who you are.  Even the birth order in family shapes us as individuals. That’s the topic of JEFFREY KLUGER’s new book, The Sibling Effect: What the Bonds Among Brothers and Sisters Reveal About Us.  Kluger, science editor of Time Magazine, writes about the love, the jealousy, and the rivalry between brothers and sisters, and about parental favoritism, something he argues is a fact of life even though most parents won’t admit to it.  This hour, we’ll talk to Kluger about the science that explains our sibling relationships. And, we’ll hear from a mother who says she has no favorites – Time Magazine contributor BONNIE ROCHMAN.