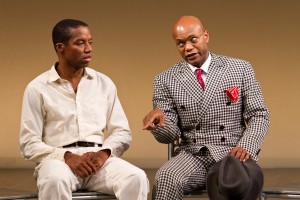 How do you tell the story of the infamous trial of the Scottsboro Boys in fierce, minstrel form? The last collaboration of  John Kander and Fred Ebb, the legendary musical theater team behind Chicago and Cabaret, was the 2010 Broadway production of The Scottsboro Boys, which was nominated for 12 Tony Awards. The Philadelphia Theatre Company has brought the first post-Broadway run of the musical to Broad Street. The 1930s “Scottsboro Case,” about a group of African American teenagers falsely accused of raping of two white girls, is said to have laid down the groundwork for the American Civil Rights movement. Our guests, Philadelphia-based actor FORREST McCLENDON, who was in the original Broadway production, and librettist DAVID THOMPSON, walk us through how dancing and singing tells this complicated, loaded tale of racial and legal injustice. Philadelphia Theatre Company’s production of The Scottsboro Boys is playing at the Suzanne Roberts Theater through February 19th.