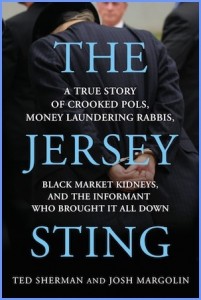 The arrests, 44 of them, in New Jersey in July 2009 sounded like the stuff of fiction, or at least the stuff of conspiracy theorists. Three mayors, five Orthodox rabbis, two state legislators and the deputy mayor of Jersey City, a former stripper, were among those arrestsed. At the center of the corruption scandal was Solomon Dwek, who before turning FBI informant carried out a $400 million Ponzi scheme, and who helped arrange a black-market kidney deal with an Israeli trader in human organs for his ailing grandfather. A new book, The Jersey Sting: A True Story of Crooked Pols, Money-Laundering Rabbis, Black Market Kidneys, and The Informant Who Brought It All Down, tells the stranger-than-fiction tale and its political ramifications; the man who authorized the sting, then-U.S. Attorney Chris Christie, is now the Garden State’s headline-grabbing governor. Joining us today are the book’s co-authors, JOSH MARGOLIN and TED SHERMAN, who broke the story of the corruption investigation as reporters for the Newark Star-Ledger.

With lessons from Palestine and Ferguson, Philly clergy act as buffers between protesters, police

In addition to helping deescalate tensions between police and protesters, members of the Philly clergy group say they are there to bear witness.

PA Post's investigation on commissary items is the basis for a nonprofit’s legal claim advocating for prisoners’ rights.

The collaboration between the 39th Police District and the Georgia E. Gregory Interdenominational School of Music, is intended to create better relationships between residents