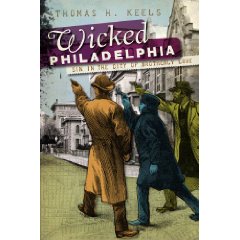 As locals and tourists walk around Philadelphia this Independence Day weekend pondering the founding fathers’ aspirations of virtue, social historians now view the prim city in the late 18th century as a destination party town. The port city was the hub of different races, classes and sexes that was growing into a desirable place to conduct business and pleasure. What went on behind the charming, preserved, colonial buildings on High (now Market) street? The Southwark neighborhood in South Philly was such a robust prostitution district it became a concern for public health.  Our guest, local historian THOMAS KEELS tells many ribald stories in his new book, “Wicked Philadelphia: Sin in the City of Brotherly Love,” including various methods of body snatching and murder.

Newtown Square’s Aronimink Golf Club is currently hosting the AT&T National, as part of the the PGA tour. Up until 1998, no African Americans were members of the club and our guest, KENNETH HILL, a social member starting in 1991, was the man who made this happen. The PGA had pressured Aronimink to open their membership to minorities before this, but the Golf Club couldn’t meet the PGA standards as they had a seven year member wait list, and refused to bump a black man to the top. A former Sunoco executive, Hill left Aronimick in 2003 as he retired. He golfs less these days and volunteers in community service.

The Flyers have been one of NHL’s biggest flops of the season. Their latest loss was a 7-1 defeat by Tampa Bay on Sunday night that sealed Vigneault’s fate.

Reactions and calls for change after yet another attack against Asian Philadelphians. A Rabbi talks about opioid abuse recovery. The Philadelphia Union is up to something big.

Union without 11 players for MLS East final against NYCFC

The Philadelphia Union will be without 11 players on Sunday when the team plays NYCFC in the MLS Eastern Conference finals because of COVID-19 health and safety protocols.