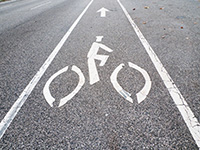 Hour 2
There’s a lot of two-wheel activity in and around the city of Philadelphia, as the city incorporates bicycles more and more into its infrastructure and planning. Pedaling over to join us on today’s Radio Times are a pair of leaders of the Bicycle Coalition of Greater Philadelphia, BREEN GOODWIN and SARAH CLARK STUART. We’ll discuss the new bike lanes in Center City, the Bike the Strike spike in two-wheel ridership, and other developments in the region’s bicycle world. Then we’ll talk to RINA CUTLER, Philadelphia’s Deputy Mayor for Transportation and Utilities, about the city’s efforts to better incorporate bicycles into the city’s transportation network; and ROGER GELLER, Bicycle Coordinator, in the City of Portland’s Office of Transportation.
Listen to the mp3

With more than 10,000 commercial passengers flying from the Wilmington-New Castle Airport this year, the facility is eligible for a $850,000 boost in federal funding.