She spends “a lot of time hiking, driving around — I actually work in New Castle County along the Red Clay Creek.”

Travers is the Watershed Stewardship Team Leader for the Delaware Nature Society, so she knows she might be paying more attention than most of her neighbors. But the changes she sees are not just when she’s at work or on her hikes. They’re all around the region: shifting sediment and rock, exposed tree roots, even entire trees toppled into a creek.

“Some erosion in streams is totally natural,” she told WHYY News. “But it’s the degree that we’re seeing, and the rate of change, that’s really alarming.”

What’s the difference between “natural” erosion and “alarming” erosion?

“Every stream basically wants to be flat.” said Villanova environmental engineering professor Andrea Welker. “So there’s always going to be some erosion and some deposition that’s happening.”

In other words, a stream that looked one way 20 years ago isn’t going to look the same now. But other erosion isn’t in the normal course of events … and can be affected by infrastructure.

Others contacting WHYY have pointed out erosion issues, too. They often noted its proximity to infrastructure and buildings, or asked whether it could be linked to nearby development.

Ron Althouse, who lives in rural Berks County, attributed flooding and sediment buildup to a bridge near his house. Patricia Lowe walks near the Pennypack Creek most evenings and notes erosion where it empties into the Delaware River, just behind a prison. Elizabeth Thorpe, who lives in Bensalem in Bucks County, said she sees the stream across a nearby parking lot fluctuate and erode every time a storm hits.

“Water infrastructures do have the potential to alter hydrologic processes including flow volume (e.g., floods) and sediment transport (e.g., soil erosion),” Lehigh University hydrologist Ethan Yang wrote in an email to WHYY. “These kinds of effects from bridges are very limited and localized … dams, on the other hand, will have a much greater effect on flow and sediment, because the purpose of a dam is to regulate flow for human benefit.”

But along the Pennypack and Poquessing creeks, where Thorpe and Lowe described erosion, Yang didn’t note any major dams upstream, meaning there is no reason to remove specific infrastructure. Urbanization, which can also disrupt hydrologic processes and results in more flooding, doesn’t seem to be the key factor either, he said; land use images in 2001 and 2016 (the latest data he has) don’t indicate a significant change in buildings or development. 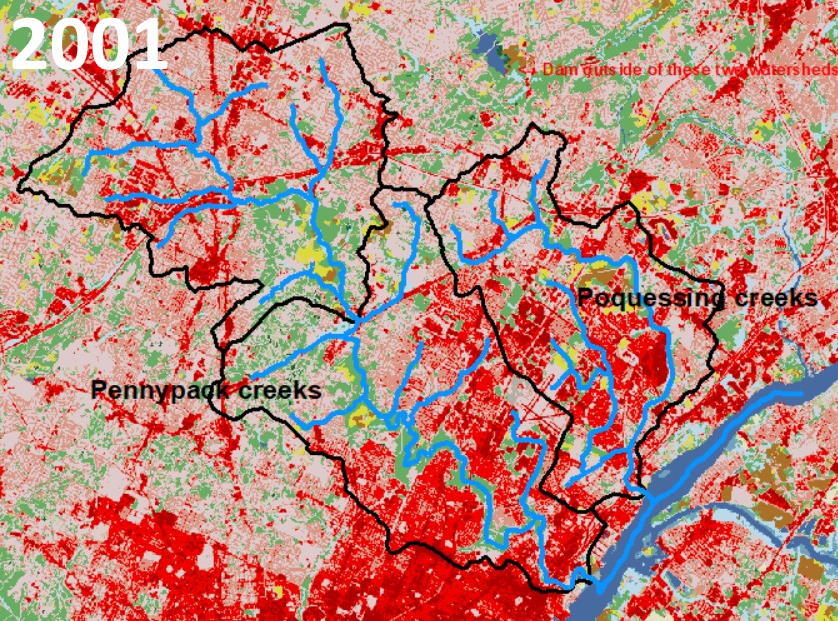 “I think riparian restoration (either more trees or shrubs or some engineering methods like channel lining) will be more effective here,” Yang said.

In less urban areas, that kind of riparian restoration is already being encouraged by state officials or boosted by support from local water research organizations. In some cases, it’s a race against time and intensifying storms.

Deanne Ross lives in Garnet Valley and often kayaks on the Brandywine River. She said erosion has always been an issue, but recently it seems to be getting worse. Silt, sand, loose soil that isn’t held in place by the roots of trees and bushes … all of it cascades into the water.

During recent storms in Delaware County, rainwater “inundates the streams and overwhelms them, and that’s where all the erosion comes from — that torrent, rush, of water,” Ross said. The river changes, too. “It goes from being crystal clear, to where you could easily see three or four feet down to the bottom, to looking like chocolate milk.”

When the hydrologic cycle is disrupted, Welker said, “[the solution is] trying to keep as much of the water on your own individual site as possible.” Rain gardens, flood plains and stream buffers can serve to stabilize stream banks and absorb water before it accumulates enough to do damage. “If there’s more vegetation, [that] will slow the water down, and absorb it, and use it before it makes its way to the stream,” she said.

Meanwhile, Travers and Ross are alert to the changes in their local watersheds. Travers wants more people to understand those changes. Ross said she’d like to see more open space designated specifically for water protection purposes: buffer implementation, forested areas, and natural marshes designed to act as flooding zones in the event of a storm.

“It could be relatively easily done,” she said. “But it’s a matter of priorities and how money is spent and who’s in charge that day.”
—
The reporting for this story is part of the broader “From the Source” project and is supported by the Lenfest Institute, the National Geographic Society, and the William Penn Foundation.

Kristen Travers, Deanne Ross, Patricia Lowe, and Elizabeth Thorpe told their stories to WHYY via responses to a callout asking how rivers and creeks in the area are changing. Get in touch and let us know what you’re seeing.

Conservationists from the New Jersey Audubon Society have worked for nearly a decade to track and conserve the endangered bog turtle.