This story originally appeared on NBC10.

From the Lehigh Valley to the Jersey Shore and every in between, a major and multifaceted winter storm arriving Wednesday afternoon is expected to have very different impacts as it roars through the Philadelphia region. Some areas could get around a foot of snow by Thursday morning while other areas see mostly heavy windswept rain and a flooding threat.

The NBC10 First Alert Weather Team has issued a First Alert starting at 1 p.m. Wednesday for heavy snow, heavy rain, strong winds, and coastal flooding due to the powerful nor’easter. The First Alert expires at 10 a.m. Thursday. A winter storm warning is in effect for all Pennsylvania counties in the region.

Here are some things to be aware of with this storm

Now, here’s the expected snow totals, but remember that these are cumulative totals over the course of the storm (meaning sleet or rain could dampen what you actually see by the time the storm is over.)

The farther you are from the coast, the more snow you should expect. The Lehigh Valley is expected to get plowable snow while barely any snow is expected to fall along the southernmost Jersey Shore. Notice how the estimated snow totals jump from only a couple inches just south of Philadelphia to 6 to 10 inches just north of the city. A tight range is indicative of the tricky forecast of the rain-snow line and the impacts of sleet and freezing rain to totals. 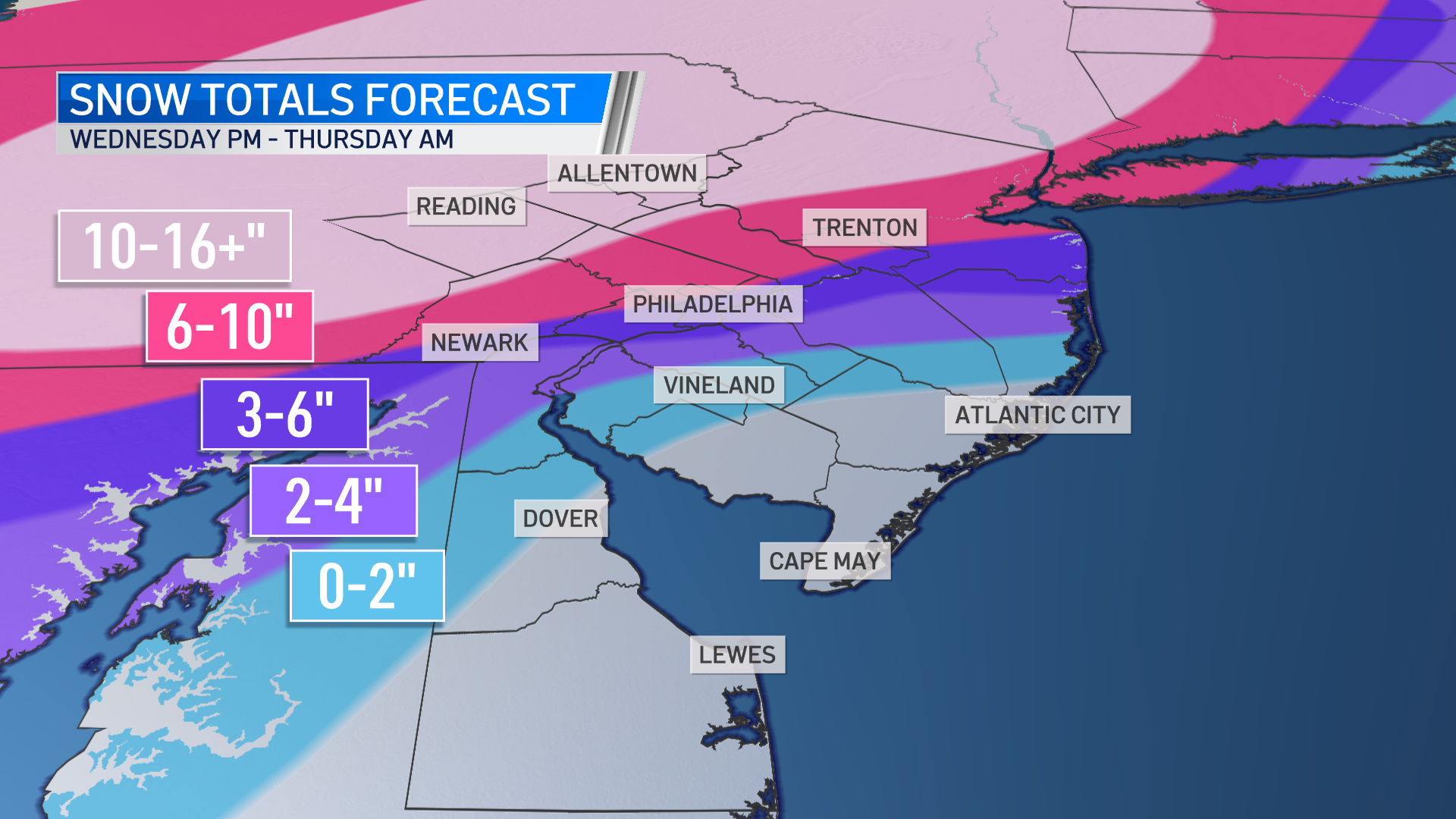 A look at estimated snow totals for the storm Wednesday into Thursday. (NBC10)

We should start seeing the first flakes in the Philadelphia suburbs around 2 p.m. Wednesday. The peak is expected Wednesday early evening through early Thursday. During this time period, Philadelphia and the I-95 Corridor will see the rain-snow line move over causing a mix of sleet, freezing rain and finally rain to compact any snow that already accumulated.

You should basically plan on avoiding driving on roads, if you can, throughout Wednesday night into Thursday morning as visibilities are expected to be low and roads could be slick. It will also give crews the chance to clear roads.

The rain-snow line will shift southward again Thursday morning, bringing one more round of snow showers to Philadelphia before the system exits around 9 a.m. Winds will also play a major factor, topping 40 to 50 mph gusts inland, which may cause power outages and damage.

Below are impacts for each of our neighborhoods from this storm. This is an evolving situation. Please check back for future forecasts every few hours as a slight change in track could mean major adjustments to snow totals, wind speeds, etc. Changes in track are completely normal and to be expected with storms like this one.

Expect heavy snow. Snowfall accumulations of 1 foot — up to 16 inches or more — should be expected. There will be some blowing and drifting of snow as gusts may reach up to 40 mph. These aren’t the strongest gusts of the region, but they’re powerful enough coupled with the snow to cause power outages or damage.

Snow and heavy precipitation may cause widespread power outages, followed by a significant drop in temperatures later this week.

However, a slight shift in the storm track north or south would dramatically change the amount of snow for these neighborhoods and other areas to the south.

Philadelphia, northernmost Delaware, most of Delaware County and parts of South Jersey

This is the trickiest area when it comes to snow totals. The storm will bring heavy snow initially, before turning to sleet and ultimately rain overnight. Thanks to the ice and rain, snow will be compacted. Three to 6 inches of snow is expected with snow accumulating early in the storm and toward the end.

A slight change in the storm’s track could change this total, particularly to the lower end if the rain snow line moves northward too early.

Expect slippery road conditions during the height of the storm and slick roads overnight into early Thursday as there could be some freezing. Wind gusts of 40 to 50 mph could bring down limbs and power lines.

The most inland portions of South Jersey and Delaware may see steady to heavy snow at the start of the storm Wednesday afternoon and evening before the area turns over to sleet and then a heavy rain. Even thunderstorms are possible Wednesday night.

Winds will gust 40 to 50 mph, so damage and flooding is possible with the heavy rainfall. Snow totals may get as high as 4 inches inland, but most of South Jersey sees lower totals.

New Jersey declares State of Emergency, braces for first snowfall of the season

The New Jersey Department of Transportation has issued a commercial vehicle ban on seven interstate highways starting at 1 p.m.

Heavy, windswept rain is expected for shore communities. Up to 2 inches of rain is possible with localized areas of street and highway flooding. Wind gusts of 50 to 60 mph are possible with power outages and localized wind damage.

The rain could briefly change to snow early Thursday morning before ending. Little to no accumulation is expected.

We aren’t used to snow as the last time Philadelphia last saw at least 1 inch of accumulation was more than 650 days ago and it’s been around 1,000 days since the Lehigh Valley last had a foot or more of snow.

We aren’t used to snow on roads so be careful if you have to drive and stay home if you don’t. If you do go out, make sure you have an ice scraper and fully charged phone.

“We urge all New Jerseyans to stay off the roads, stay at home, and stay safe,” Murphy said.

The Philadelphia School District announced all school buildings are closed on Wednesday and Thursday. However, since all classes are being held virtually, there won’t be any change to class schedules.

Be sure to charge up your devices since power outages are a concern with the heavy snow and strong winds.

What the storm means to public transit

NJ Jersey Transit on Wednesday adjusted its schedules in anticipation of a storm that is predicted to deliver snow and a wintry mix to the state.

Buses, light rail and Access Link will operate on a regular weekday schedule for as long as weather and road conditions allow.

SEPTA said changes to its service depends on conditions.

You can also track PennDOT trucks on the 511PA website.

Stay ahead of the storm by downloading the NBC10 app now for the latest First Alert Weather forecasts.

The storm disrupted flights at major hubs in the U.S. on Friday, and ice threatened to wreak havoc on road travel and electric service.

A final band of snow is moving out of Philadelphia, the suburbs, Lehigh Valley and central New Jersey Thursday morning.

We know a nor'easter is headed toward the Philadelphia region — but it also looks like its impacts could vary greatly from neighborhood to neighborhood.