Pastel artist Nick Serratore specializes in taking what many people might consider a boring scene and bringing it to life. 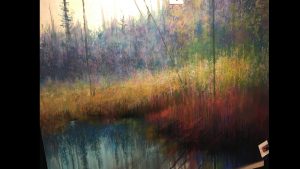 Nick grew up in Montgomery, Pennsylvania, an area he describes as beautiful, with “mountains, trees, a lot of state parks.” So it must have been a shock when he moved to Milton, Delaware. Milton and the surrounding area are relatively flat in comparison, but no less beautiful.

“I was like, how am I going to interpret anything with this flat landscape,” Serratore recalled. He began by painting the marshlands, which inspired the idea of “taking something that’s ordinary and making it extraordinary.”

He would take scenes that he considered mundane or boring and make them his own, rendering them as “something more that what they are.”

“I didn’t realize how beautiful the sunsets were down here, especially in the fall,” he said. So it was that the boring flat landscape in fact became a source of great inspiration. 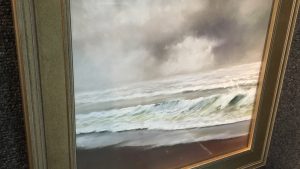 But he isn’t happy to just paint what he sees. “I like to take things that we see on a daily basis and make them extraordinary.”

While on a road trip, Serratore found himself on a road with wetlands on either side that actually came up to the road. Perhaps it was as the way the sun was “hitting this straggly pile of grass or whatever and reeds, I got out of the car and photographed it.”

Most of us wouldn’t take the time to stop and take a picture of some sticks in the mud, no matter how beautifully we thought the sun looked reflecting against them. But Serratore did, and that’s theme the driving his work. He takes those common scenes, infuses them with more color, and brings them to life.

Given the state of the world today, he believes that we could all use a little break from reality. “I find with my paintings, they kind of offer that to people. They offer those few seconds of visual calmness.”

"I too want to be a famous artist and whether that happens that’s great, I’m happy with what I do.”
- Nick Serratore, pastel artist

Almost all of the artists I interview tell me that their favorite part of the process of creating art is two-fold — the beginning and the end. The beginning because that blank canvas holds so many possibilities, and they are excited to start. It can also be scary for the same reasons. They say the middle part becomes work that leads to their other favorite part, the end. That’s when they can step away and look at what they have created and put their name to it.

Serratore answered a bit differently when I asked him this question. He refers to that beginning phase as the ugly stage, “when you are still trying to think of things and map stuff out.”

Instead of dreading the middle part, he described it like this: “There’s a point in the painting where you become one with it, you own it. That’s when you get lost in it.” That’s the middle part.

He gets excited for the end, too. “I’m going to put those finishing touches on it. That’s when I go in and proofread the painting before I sign it.” 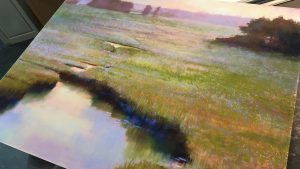 But, overall, Nick loves the process best when he is caught up in it. “It’s that joy of watching it come together,” Serratore said.

You can see the process for yourself as he takes and posts pictures of the paintings in their various stages on his website.

When you view the finished work, he wants you to “become immersed in [your] own experience.”

“I want them to feel something from it, walk away with a sense of peace, and I also want them to say, ‘Hey, that’s one heck of a great pastel.’ ”

Officials expect the biggest sporting event in the history of northern Delaware to draw more than 130,000 fans, and pump tens of millions of dollars into the economy.