SEPTA officials hope low-income riders in Philadelphia find some relief with a new fare proposal that aims to make the system more equitable without blowing the cash-strapped agency’s budget.

The authority’s proposed fare structure change would provide one free transfer per trip. The $1 fee would be applied to the second transfer within a 90-minute window.

The transfer fee has been a pain point for transit equity advocates. A recent study found the extra charge impacts low-income riders the most, but it’s a moneymaker for SEPTA. The agency estimates it brings in between $12 million and $14 million.

SEPTA General Manager Leslie Richards said the authority is proud of the agency’s plan to partially eliminate the fee without impacting service. The agency’s board must still approve the proposal before it can take effect.

“We knew that we wanted to come up with a fare proposal that improved equity as much as we could given our current constraints,” she said.

If the proposal moves forward, Philadelphia will join a growing cadre of transit agencies, including the authorities in New York City and Boston, that have cut the charge to increase equity.

More than 90% of Travel Wallet users stand to benefit from the free transfer, according to SEPTA’s chief financial officer Tom McFadden. In addition to money, riders can save time. Officials estimate riders traveling from Nicetown to City Hall can save 21 minutes by connecting to the Broad Street Line.

City Councilmember Jamie Gauthier, who railed against the fee at SEPTA’s February board meeting, praised the proposal as “a big step in the right direction.”

“The new fare structure will save both time and money for hardworking people in neighborhoods across Philadelphia,” she said in a statement to PlanPhilly. “Making the first transfer free for Key Card users will benefit a large swath of riders, and the reduced $1 fare for children will go a long way toward keeping more money in families’ pockets.”

SEPTA left the base fare untouched at $2.50, and increased Travel Wallet fares to match it with a 50 cent bump. Officials hope the increase will generate revenue in line with inflation over the next three years. Transpasses increased, also. Monthly Transpasses will now cost $99, a $3 increase, and Weekly transpasses go up $1 to $26.50.

Other proposals include children between 5 and 11-years-old riding for $1, even on Regional Rail, while children under five still ride free. Base fares for people with disabilities on transit or CCT will remain.

SEPTA also introduced a new 72-hour pass for $18, the same price as two One Day Convenience Passes. The new product is intended to accommodate those with changing work schedules. It can benefit visitors to the city as well. 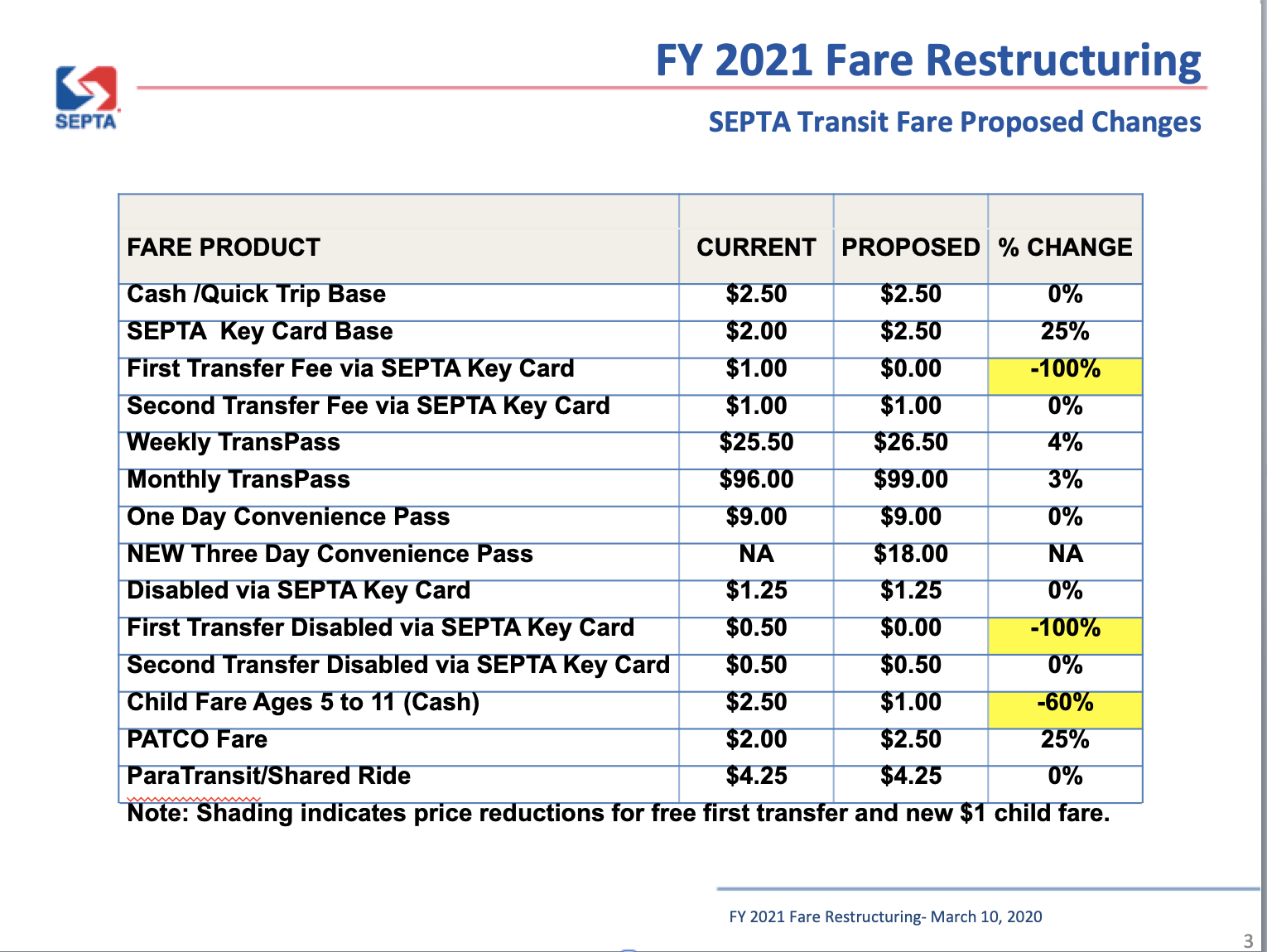 EConsult Solutions, Inc. conducted a study of the equity impact of the new proposal. They found the authority decreased fares as a share of income for low-income riders by a little over 1%. However, they shifted the cost to higher-income riders by 0.2% for those in the higher bracket and 1% to those in a lower bracket above the median income.

SEPTA hopes to bring in $16 million with the new fare structure, about 40% less than the goal it set for 2017’s fare increase. The authority is banking on the new structure to increase ridership. Deputy general manager Rich Burnfield says SEPTA is looking at other avenues to balance the budget such as advertising and naming rights.

The plan still leaves cash riders paying another fare to transfer in a continued effort to encourage riders to use SEPTA Key, the only way to take advantage of the free transfer. Richards emphasized the importance of being able to track rider patterns and habits in order to collect data to help improve service.

With or without the Key, however, Gauthier wants to see the transfer fee gone for good. She urged “SEPTA to work with community leaders to reduce any remaining barriers to obtaining and refilling Key Cards.”

“I hope that in the future, we will see the elimination of transfer fees altogether,” she said. “For many Philadelphians, the difference of just a few dollars per trip can be very meaningful. I look forward to continuing this conversation with SEPTA leadership, and working together to identify additional revenue sources that might offset some of the costs of making equity a reality.”

SEPTA is up for another fare review in 2023, and the authority hopes to implement the Comprehensive Bus Network Redesign by that time. Richards hopes the redesign “gives us possibly even more options to improve even more on looking at equity issues as well as accessibility issues and efficiency issues.”

She introduced the possibility of further reducing child fares and eliminating a second transfer fee. For now, though, SEPTA is pleased with where things are. 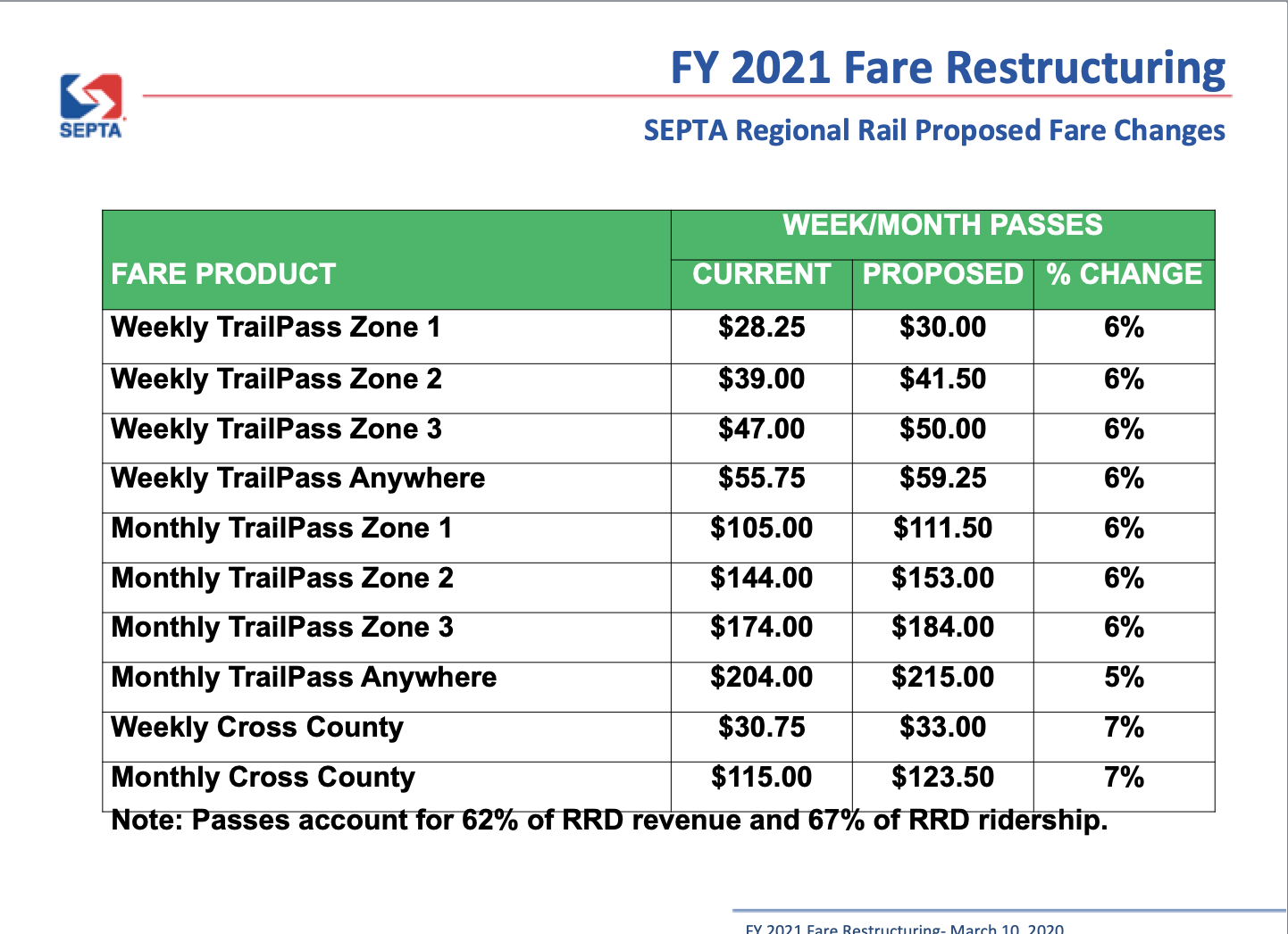 Single Ticket Weekday Zone 1 passes will go up by 50 cents. Zones 2, 3, 4, and N.J. will increase by 75 cents. When SEPTA rolls out Travel Wallet on Regional Rail this year, users will receive discounts on Weekday passes ranging from 50 cents on Zone 4 to $1.45 on Zone 1.

Independence Passes will increase by $1.50 and will remain the same for SEPTA Key users. 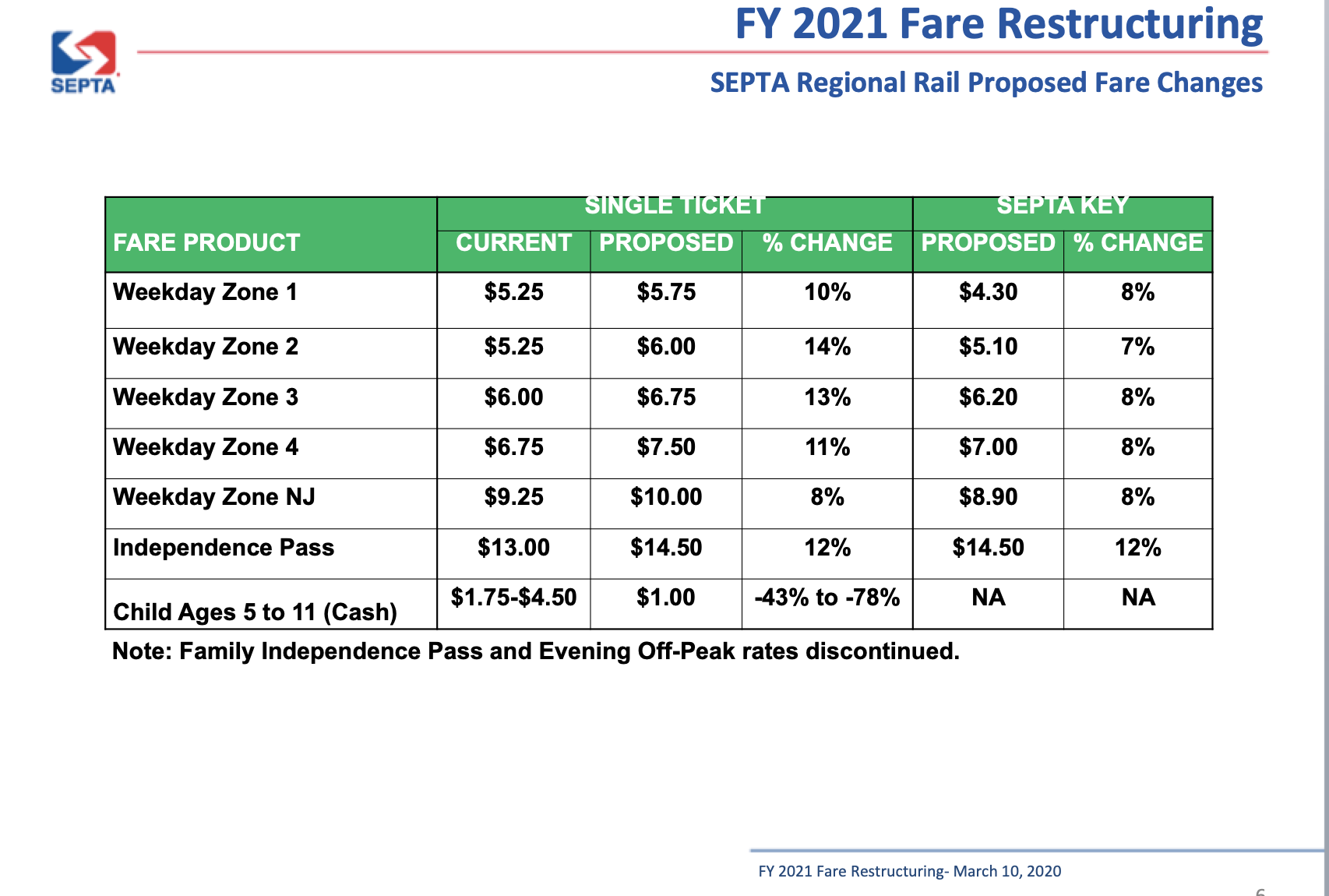 SEPTA will hold 10 hearings on the new fare proposal, two in each county served, between April 20 and 27 to take rider feedback. The board will vote on it May 28.

Leadership of the strike-prone SEPTA union has changed. Don’t expect much difference

SEPTA’s police force will begin working longer hours in an effort to prevent crime over the holidays on the mass transit system.

To be finalized, the agreement must be ratified by TWU Local 234 members and approved by the SEPTA board.