Demolishing the former PES refinery complex, now owned by Hilco Redevelopment Partners, will take four years and will include the removal of 35,000 tons of asbestos, 850,000 barrels of hydrocarbons, 100 buildings, and 950 miles of pipe, company officials told members of the public at a virtual meeting.

More than 100 people attended the Thursday night session, which had been requested by the grassroots environmental justice group Philly Thrive. The group’s members wanted answers about the complex nature of the cleanup, how current demolition activities would affect those efforts, and who among the former and current owners were responsible for carrying them out.

Speaking after the event, some Philly Thrive members said they still had questions and were disappointed that they had not been able to engage in a dialogue, but instead had to submit questions via the Zoom Q&A.

“They do all the talking, and we do all the listening,” said Debbie Robinson, who lives near the refinery. “We should have the right to look you in the face and talk to you like a human being.”

A big question on her mind, Robinson said, is whether the demolition will involve detonation or explosions, which she worries could release hidden toxins. She also has questions about the air quality. While the facility operated as a refinery, neighborhood residents like her regularly smelled foul and toxic odors that they say contributed to high levels of cancer and asthma. She said those releases have abated since the shutdown of the plant.

Jasmine Sessoms, who grew up in Point Breeze and now works for Hilco as its main community liaison, said all questions not answered during Thursday’s session would be answered with follow-up emails.

Philadelphia Energy Solutions, the largest and oldest oil refinery on the East Coast, announced it would shut down after a fire in June 2019.

The South Philadelphia refinery complex dates back to the Civil War era, when it was built as Atlantic Refining Co. Gulf Oil opened a neighboring facility in 1926, and the two operations were bought by Sunoco in 1988 and 1994, respectively.

The complex grew to be the largest refinery on the East Coast and leaves an equally large legacy of pollution, both in the soil and the water table. Facing bankruptcy, Sunoco formed a joint partnership with the Carlyle Group to create Philadelphia Energy Solutions in 2012. PES entered bankruptcy in 2018, but just as it was emerging from that process, an explosion and fire led to a complete shutdown of the facility in July 2019.

Energy Transfer acquired Sunoco in April 2012, and along with it the responsibility for all pre-September 2012 contamination. Evergreen Resources, a Sunoco company, was in charge of that investigation and cleanup even before the latest PES bankruptcy and sale to Hilco. That process is regulated by a Pennsylvania statute known as Act 2.

Julianna Connolly, who is in charge of environmental cleanup at Hilco’s properties nationwide,  explained in a slide presentation Thursday night how the different companies’ responsibilities would break down. Hilco will need to sample the soil underneath all the decommissioned tanks to find out whether any toxins were released into the subsurface. Hilco also will be moving soil around to help raise some portions of the property that would be at risk for flooding due to sea level rise. The safety of that soil will also fall to Hilco (HRP). 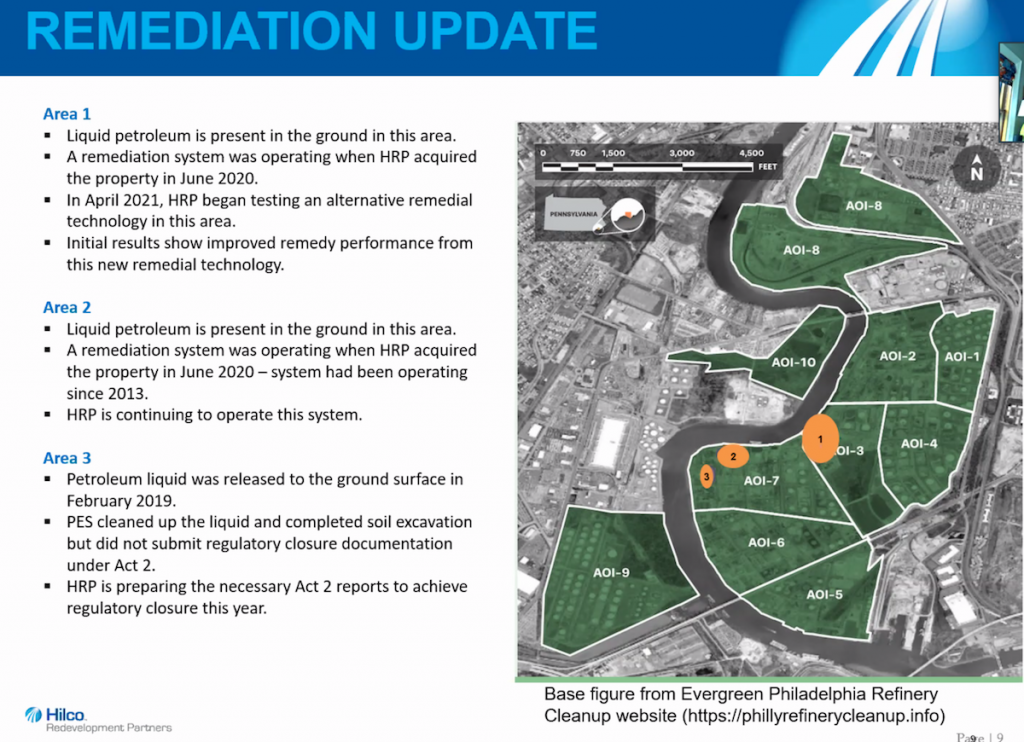 Much of the contamination at the site is unknown because Evergreen was unable to access land taken up by tanks and pipes while the refinery was still in operation. But once those are removed, Evergreen will have to do an evaluation, and the evaluation will be based on a new use. Evergreen’s Tiffany Doerr said the date to comply with its Act 2 requirements has been pushed back 10 years until 2030 to accommodate Hilco’s timeline.

“So a lot of the work that we did, for example taking indoor air samples of all the buildings, was based on it [being a refinery],” said Doerr. “So now it’s going to be another use, and all those old buildings will be demolished and new ones will be put in place.” 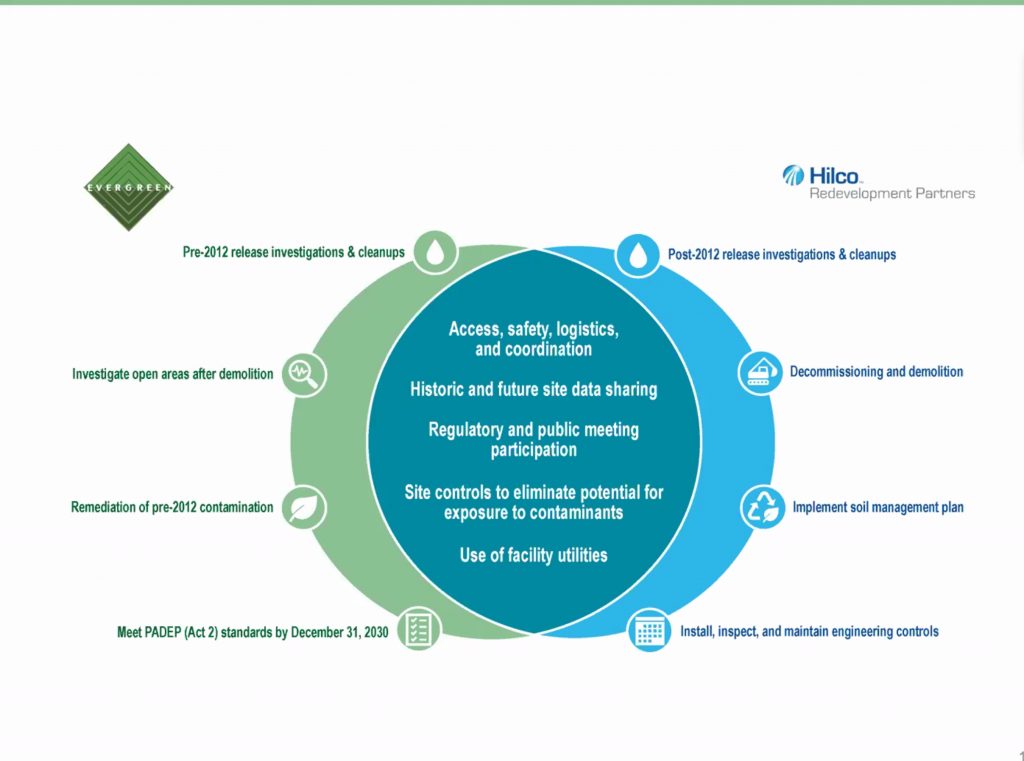 One of the most dangerous on-site contaminants is the carcinogen benzene. The air pollutant is particularly toxic for children to breathe, even in small amounts, because it causes leukemia. Air monitors from 2020 had picked up high levels of benzene even after the refinery shut down, but Hilco’s Connolly said that all of the on-site bulk benzene has been removed, and that monitors now measure low levels of the air pollutant.

“What we see with the benzene results is that the vast majority of the data are consistent with benzene concentrations throughout the air in the city of Philadelphia and other urban settings.”

Hilco officials say options for repurposing the property continue to evolve, and could include life sciences, manufacturing, cold storage, and e-commerce distribution.

You might want to mask up: Fireworks cause spikes in short-term air pollution

Some of the most dangerous pollutants are the metals used to create those brilliant colors. Smoke and particulate matter can aggravate asthma, COPD.

Croda’s ethylene oxide plant on the Delaware River has been out of commission since a 2018 leak shut down I-295 on the busy Thanksgiving weekend.