For decades, the walls of Eastern State Penitentiary rang out every Bastille Day with these immortal words:

“If the people have no bread, I say let them eat Tastykake!” a very ahistorical Marie Antoinette would shout as hundreds of packages were flung to the crowd below.

The collaborative team that put the festival together had included the historic prison in Philadelphia’s Fairmount neighborhood; Terry McNally, aka Marie Antoinette, the owner of a local restaurant, London Grill; and the drag theatrical troupe Bearded Ladies Cabaret.

Last year, the prison backed out of it. This year, McNally sold her restaurant.

That wacky Bastille Day event was as lucrative as it was entertaining. Many thousands of people showed up for the street festival, providing a much-needed boon for restaurants during the otherwise slow, mid-summer slump.

In the wake of its demise, an effort to revive it has emerged. 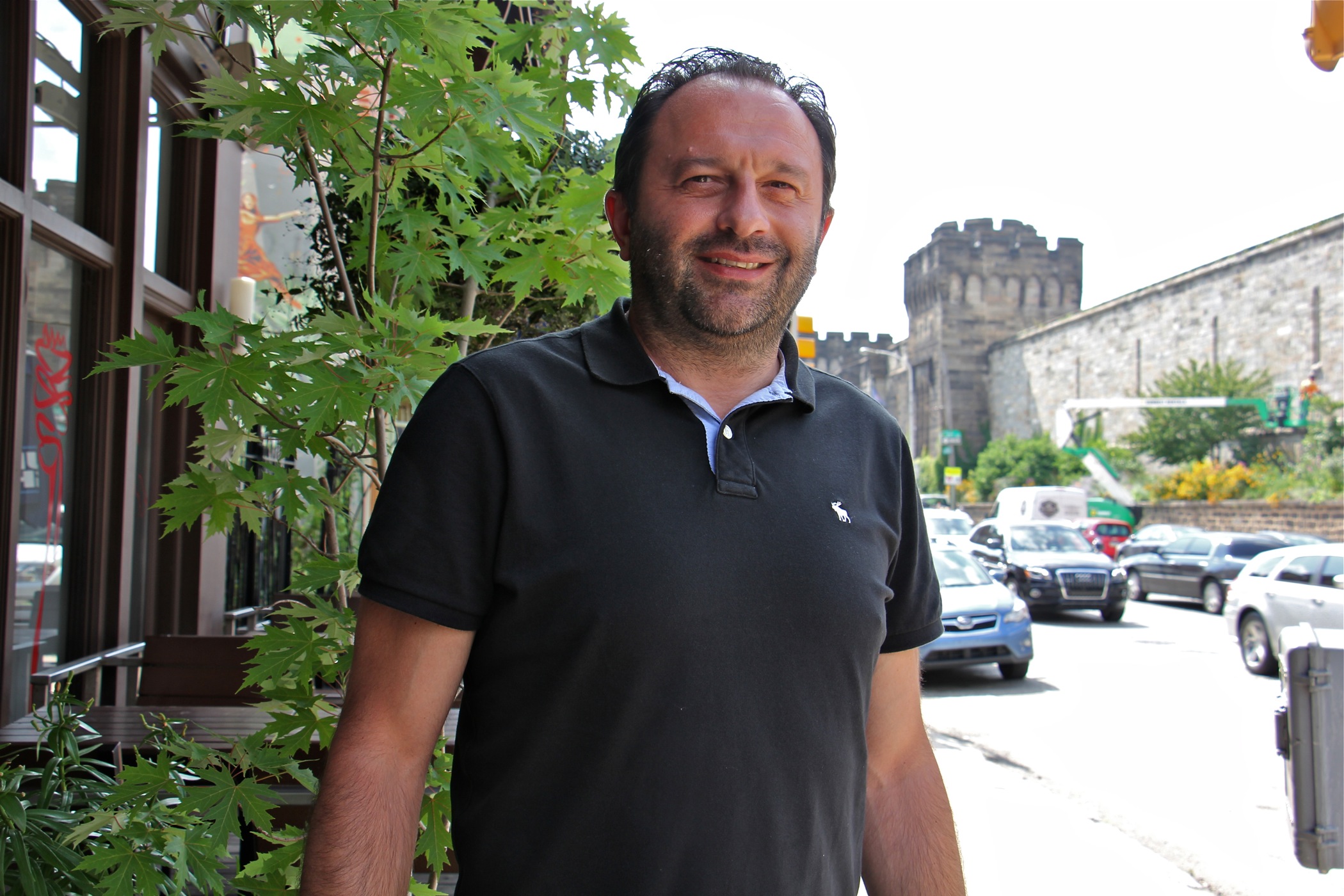 George Pantzaris, manager of Fare on Fairmount Avenue, is working with other restauranteurs in the area to bring back the Bastille Day celebration formerly held at Eastern State Penitentiary. (Emma Lee/WHYY)

“The neighborhood loves this event. Everybody loves it. It should be something that happens every year,” said George Pantzaris, the manager of Fare, a Mediterranean restaurant on Fairmount Avenue.

Fare always participated in Bastille Day but usually only to the extent of offering food and drinks on Fairmount Avenue in front of the restaurant. This year, the restaurant stepped up to become one of the organizers along with, primarily, a regional beer representative and the neighborhood bar Urban Saloon.

This year’s Bastille Day celebration on Saturday in Fairmount will involve neither the historic prison nor a devised, farcical send-up of French mannerisms and contemporary politics. A portion of Fairmount Avenue will be closed to traffic, between Corinthian Avenue and 22nd Street, to accommodate outdoor food, drinks, games, and a stage for live bands.

Staging and booking responsibilities fell to Kurt McCrohan, a regional brand manager for the French beer Kronenbourg. He has no previous experience staging public events but scrambled to figure it out this summer for Bastille Day.

He said he did it for two reasons:

“I just happen to work for the brewery that represents Kronenbourg,” McCrohan said. “So for us, Bastille Day is a huge occasion.”

He also is a Philadelphia native who appreciates the city’s traditions.

“This one was on such a scale, and the neighborhood takes such pride in it, that I was willing to take sleepless nights, a lot of stress and anxiety to get this set up,” McCrohan said. “If there’s a Philadelphia tradition that I can keep going, I will absolutely pour my heart and soul into it.”

Originally, the headlining band was going to be Black Landlord, the funk hip-hop outfit. They had to pull out at the last minute, so the headliner is now the more fuzzed rock band Starterjacket.

The organizers pulled the festival together in about a month, too quickly to be able to bring in the Bearded Ladies Cabaret. John Jarboe, who traditionally has played Edith Piaf in drag, said he would love to do the festival if given enough time to prepare. He hopes to be part of it next year.

The festival will still involve Tastykakes, but by press time they had not yet figured out how to distribute them.

It will not be the only Bastille Day celebration this weekend. The French restaurant Parc will be hosting a small sidewalk fair in Rittenhouse Square, and for the first time, the city of Trenton will mark the occasion with a festival that will close off South Warren Street near the state government buildings.

The Kimmel Center plans to bring Broadway shows back this fall

Shuttered by the pandemic, the downtown cultural campus announces its 2021-2022 lineup of Broadway shows. More programming is expected to be announced in the coming months.