Today, DeeGrace Child Care Center in North Philadelphia enrolls 29 young children and has a staff of seven. In one sense, it’s a success story: a fledgling small business forging ahead at a time when many child care providers have called it quits.

But it hasn’t been easy. Ileyemi, who the children call Mrs. Dee, has lost 10 employees in her first 10 months, and so far hasn’t paid herself a salary. Her husband’s marriage counseling work barely pays the family’s bills.

A month after Ileyemi started her center, Monique Jones closed the original location of her own child care business — Lovie Lee’s Stars of Tomorrow, a longstanding and highly rated child care program about a mile away from DeeGrace.

Jones didn’t exit the sector entirely. Her other child care center four blocks away remains open, and she holds out hope that one day she may reopen the shuttered site.

Ileyemi and Jones provide a snapshot of the child care sector’s difficult comeback after more than two years of COVID safety rules, staff shortages, and financial strain. Ileyemi is among 141 Philadelphia child care providers who opened their doors during the second year of the pandemic — 15 more than did so the previous year. While that small bump is a good sign, the city still saw a net loss of providers in both years because more closed than opened. 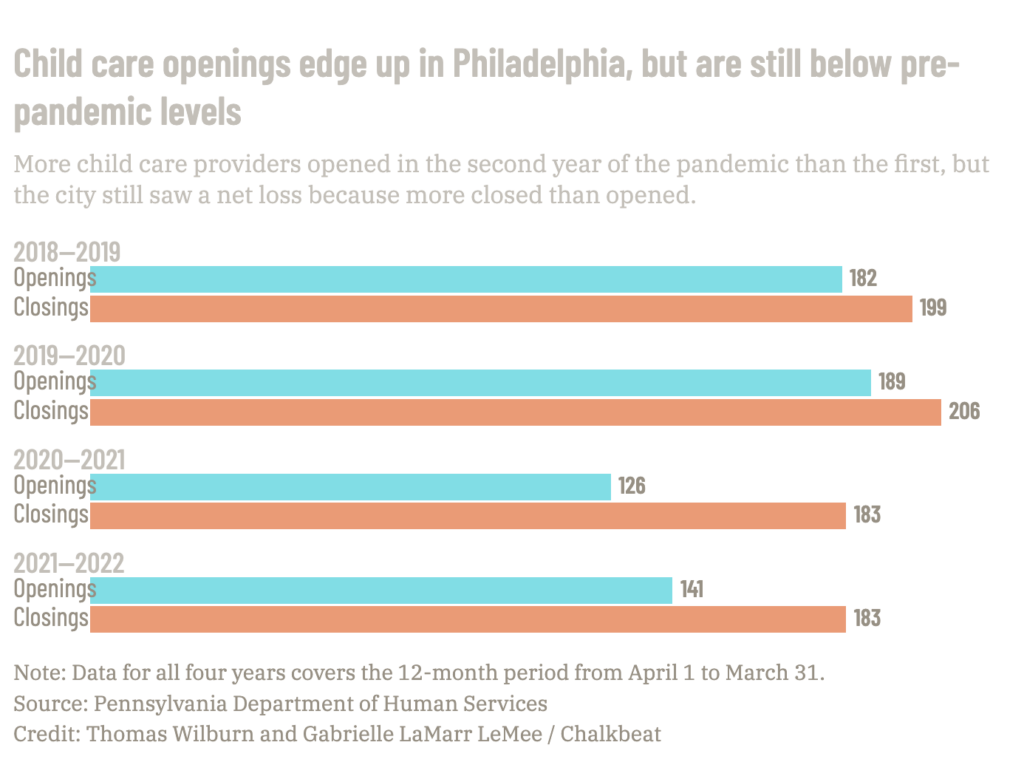 Before the pandemic, child care closures often stemmed from a provider’s changing life circumstances. Perhaps a retirement, the sale of a business, or a new career path, said Diane Getzinger, an assistant director at the Early Learning Resource Center in Philadelphia, which is part of a network of centers across Pennsylvania that helps parents find and pay for child care and helps providers improve their quality.

But in the past two years, more closures are directly related to financial hardship. They feel a lot more personal.

“Now, we’re hearing from people who are struggling to hold on,” Getzinger said.

Jones, 43, is one of them. She shuttered the original Lovie Lee’s site for financial and logistical reasons. The decision was bittersweet.

Although Jones still operates the larger center, she started her career at the original location when she was a teenager and her mother ran the business.

“That is my history. That is the foundation of Lovie Lee,” she said. “That was like closing a chapter in my life.”

Pa. has a new child care tax credit. Here’s what you need to know

People who care for two or more dependents will be able to claim up to $6,000 in child care expenses starting next year.

Ileyemi, 39, is an upbeat mother of four originally from Nigeria. She immigrated to the United States when she was 26 and earned a culinary arts degree in Ohio. Until last August, she made good money working at a nursing home and delivering groceries through Instacart.

She decided to open DeeGrace because she was dissatisfied with the experience her daughter, now 6, and her son, now 5, had in child care and preschool. She also has 3-year-old twins.

It seemed to her that a lot of programs simply handed out coloring sheets and did little to engage children in early literacy and math activities. She wanted her center to be different.

After scouring online real estate ads, she found a space she liked on West Nedro Avenue, next to a stone church and across from an apartment complex. An unexpected $50,000 windfall from Ileyemi’s late father’s estate provided the funds she needed to cover start-up costs, including finishing the building’s basement so it could be used for a preschool classroom.

“I was so happy,” she said about receiving the money. “That’s God’s blessing.”

It took months for her to complete all the paperwork, including submitting a second application because she’d indicated incorrectly on the original one that she didn’t plan to use the building’s basement space.

On a recent Friday morning, Ileyemi accompanied a gaggle of 4-year-olds on a walk in the neighborhood. They talked about trees, plants, cars, and why so many trash cans were sitting in the street.

When the garbage truck lumbered by, the mystery was solved. A sanitation worker greeted the children, telling them, “I’m busy working now. I know you guys are working, too,” Ileyemi recalled.

Later that day, she planned to head to Walmart to stock up on supplies for the center, including tissues, paper towels, and picture frames for the 2-year-old class to paint.

Bouncing back and forth

When Jones closed the original location of Lovie Lee’s Stars of Tomorrow in September, it was more than shuttering a legacy. She was also closing down the kind of small, homey child care setting that appeals to many families.

“I thought it was more intimate for infants and toddlers,” she said. “It brings parents comfort when it’s a smaller program.”

But running two locations in the midst of a pandemic — and constantly covering for absent staff at each — was stressful mentally, physically, and financially, Jones said.

“Me, being one person bouncing back and forth at two locations was difficult, and that’s the moment I couldn’t do it anymore,” she said.

Getzinger, of the Early Learning Resource Center, said among child care programs that have closed recently, there’s a mix of long-established providers like Jones and some that “didn’t realize what they were getting into.”

New providers are also a mixed bag: Some are opening second and third locations, which Getzinger likes to see.

But she wonders about providers who are new to the field, especially because of what she described as lagging demand for care.

“It doesn’t feel like the population is there right now,” she said. “Parents are either making different choices or just not returning to care in the same numbers they did prior to the pandemic,” she said.

Like child care providers in Philadelphia and elsewhere, Ileyemi has struggled to find and keep qualified staff.

“I’ve lost good staff because they want me to pay them what I can’t pay them” she said. “You can only pay what you have.”

A DeeGrace job posting on Indeed.com currently lists the pay range for a lead infant teacher as $9.21 to $15 an hour and the shift length as 12 hours. The statewide median wage for a child care worker is $10.69, according to a 2020 Stanford University report on the early childhood workforce in each state.

Over the last year, some DeeGrace staff members simply stopped showing up for work. Others “call off all the time,” Ileyemi said.

Staff shortages can have troubling consequences. At least once, too few employees at DeeGrace led to a state violation because the center was out of compliance with required staff-child ratios. Such rules, which limit the number of children one staff member can oversee, are meant to keep children safe.

Ileyemi, who describes herself as someone who rarely sits down to relax, is frustrated by the constant staffing problems.

Still, Ileyemi hopes she can make the business work long-term: “I think things [are] going to get better.”

Today, when Jones has to cover teacher absences at Lovie Lee’s, it means she simply runs up or down a few steps, instead of across the neighborhood like she did when she ran two centers.

When she closed the original location, she absorbed the dozen children there into her larger center, converting a room used for staff meetings and training into a new classroom. Although that classroom boosted her total capacity to about 40 children, she can’t find enough staff for that number of kids. Instead, she has about 35 children during the school year and 25 during the summer.

When Jones thinks about closing the site where she got her start more than 20 years ago, she takes solace in the fact that COVID hobbled many providers.

It helps “me not feel I failed at something,” she said. “That’s just where the world is with this pandemic.”

Experts and advocates fear the decline in enrollment is a sign the pandemic has forced families with low incomes to prioritize home care over earning a paycheck.

Parents continue to feel the precariousness of careers and routines dependent on reliable child care during an ever-ongoing pandemic.