Bensalem Township in Lower Bucks County will no longer pursue a formal partnership with federal immigration officials, according to advocates for immigrants rights who have spoken with the mayor.

However, contradictory statements made by Bensalem public safety director Fred Harran call into question the strength of that assurance.

On April 10 and again on May 2, Mayor Joseph DiGirolamo told board members of the Bucks County Human Relations Council — known as BCHRC — that the township no longer plans to partner with U.S. Immigration and Customs Enforcement, under what are called 287(g) agreements, said Peggy Dator, council chairwoman.

“I can only take the mayor at his word, and the mayor has unequivocally stated, that they are not pursuing 287(g),” she said. “Not now, and not in the future, and he specifically said that to me.”

Under 287(g) agreements, ICE authorizes local police to do some of the work its agents usually do, such as verifying the immigration status of people they arrest.

Bensalem was one of several municipalities across the state to express an interest in this kind of partnership in 2017.

At a township council meeting in January, more than 200 people came to weigh in on the proposed agreement. Harran presented his case for adopting some ICE powers, calling it a tool to help prevent crime and reassuring nervous community members that police would only investigate the immigration status of those already in custody for criminal offenses. During the meeting’s public comment period, an overwhelming majority criticized the program. One woman spoke in support of it.

Activists said they worked with the mayor’s office to craft a press release, shared  by the BCHRC on Wednesday, that would show a change in position by township leaders since that January meeting.

“The Mayor assured the members of the BCHRC present that the Bensalem Police Department is not participating in the 287(g) program and, further, that the township is not pursuing or otherwise taking any action towards participation,” it states.

DiGirolamo left a voicemail early Thursday saying “We’re not in 287g, we’re not going to be in 287g, we’re just doing our job to make sure that we protect our community.”

Harran, reached by phone, disagreed with the characterization that Bensalem would not, in the future, pursue a 287(g) agreement.

ICE has these partnerships with sheriff’s offices and county jails, but currently none with local police forces. Harran raised the hypothetical of MS-13, an organized crime group that started in California, descending on the Neshaminy Inn as a reason for Bensalem to pursue a 287(g) agreement if ICE gives it the opportunity. The public safety director answers to the mayor.

Still, those protesting Bensalem’s interest in partnering formally with ICE say they consider even a mixed message from public officials a win.

“We are pleased with the outcome,” said community activist Theresa Conejo. “Yeah, it isn’t written in stone, it could always turn around if they want … but at least we have these statements from them that we can hold them to.” 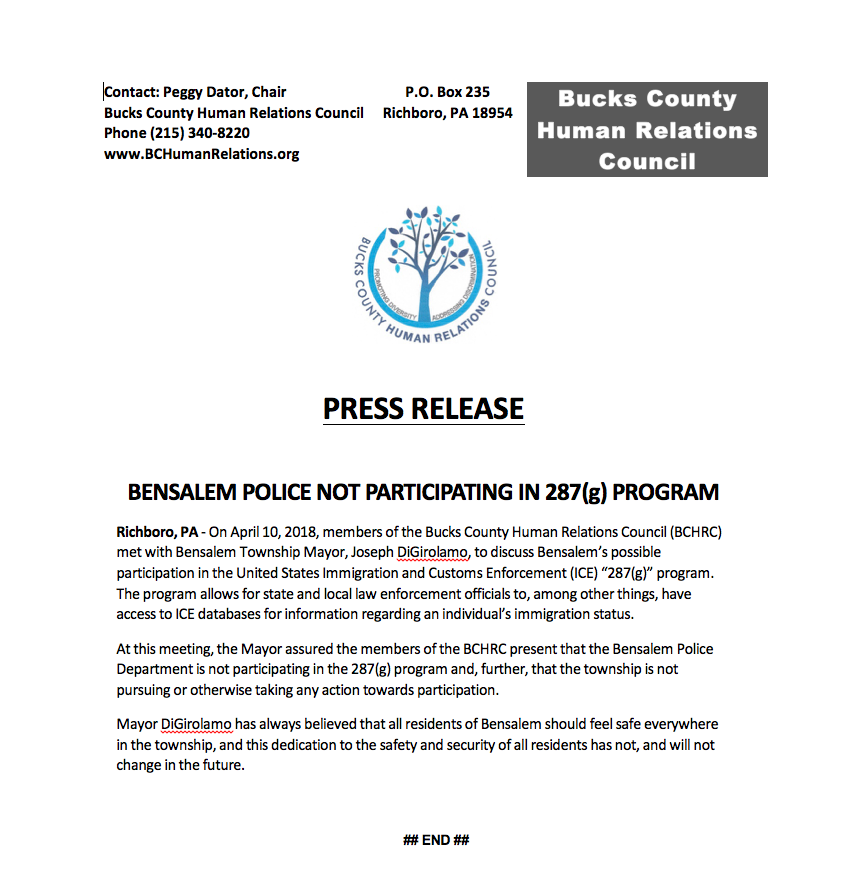 With its official launch at the People’s Kitchen, the Cooperativa is now gathering customers. From local spots South Philly Barbacoa and El Merkury, to beyond.

Local members of the Liberian community and immigration attorneys say thousands of people could miss out if the Dec. 20 deadline is not extended.

8,500-plus Afghans have landed at PHL. Where they all end up is still up in the air

The journey here is the first step in a still-evolving process for vetting, supporting, and resettling those who managed to flee life under the Taliban.