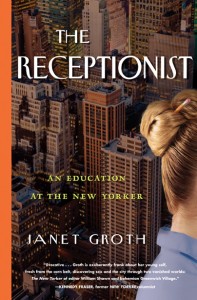 JANET GROTH had big dreams when she moved to New York in 1957.  Fresh from the Midwest, she landed a big interview at The New Yorker and was eager to begin a career as a writer.  She was so eager that she didn’t even learn how to type at a professional level, hoping she might avoid being placed in the secretarial pool. After interviewing with the legendary writer E.B. White, Groth was hired to work as the receptionist of the 18th floor.  She held that post for 21 years, and writes about it in her new memoir “The Receptionist: An Education at The New Yorker.” Today we’ll talk to Groth about her memoir, the famed writers whose messages she delivered, dogs she walked, houses she sat and children she watched, and we’ll find out why she thinks she was never able to advance at the magazine.

Then, an update on Scranton, Pennsylvania’s current financial trouble. The Lackawanna County municipality in northeastern Pennsylvania, and 6th largest city by population, in the Commonwealth, last month made the decision to pay their nearly 400 city employees the federal minimum wage of $7.25 an hour. The state of Pennsylvania is offering a $2 million conditional, no-interest loan and $250,000 grant from the Department of Community and Economic Development. Mayor Chris Doherty and city council must come up with a financial recovery plan by August 1st to receive the promised funds, and pay back $1 million of the loan in 30 days. City unions have challenged this move in County Court, but the Mayor still can’t come up with the money charged by the judge’s order to pay full salaries. Times-Tribune of Scranton and Wilkes-Barre political reporter BORYS KRAWCZENIUK will join us for an update on the beleaguered “Electric City.”