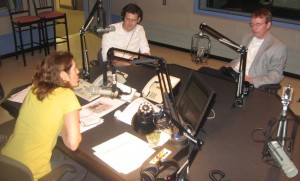 Pennsylvania is home to a host of compelling political races for seats up for election in November. Republican Attorney General Tom Corbett is vying with Democrat Allegheny County Executive Dan Onorato to succeed Ed Rendell as Governor. Democratic Congressman Joe Sestak has ousted incumbent Senator Arlen Specter and is now in a pitched battle with Republican former Congressman Pat Toomey to take the U.S. Senate seat Specter has held since 1980. And there’s a legion of interesting contests for seats in the U.S. House of Representatives in the Keystone State, as well. Joining Marty on this campaign edition of our weekly political roundup are WHYY’s Harrisburg reporter SCOTT DETROW and ALEX ROARTY of the PoliticsPA blog.