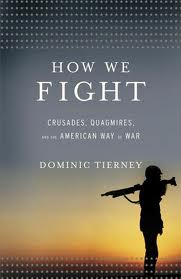 Political scientist DOMINIC TIERNEY says Americans have a particular way of thinking about and fighting wars.  We’re drawn to missions to overthrow tyrants but when it comes to nation-building or peacekeeping, our hearts aren’t really in it.  Tierney, a political scientist at Swarthmore College, has a new book out on U.S. foreign policy, How We Fight: Crusades, Quagmires and the American Way of War.  He sits down with Marty to talk about the unique pattern of American warfare that he traces from the Civil War to today’s wars in Afghanistan and Iraq .