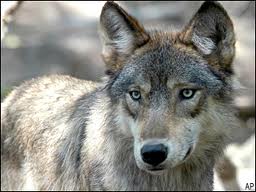 The gray wolf in the United States has made an incredible comeback.  In fact, it’s doing so well, that federal officials and some members of Congress want it removed from the Endangered Species list.  Twenty years ago, there were no wolves in greater Yellowstone and the northern Rockies but today there are 1700.  The question of whether or not to protect wolves has sparked controversy for years, particularly out west.  In this hour of Radio Times, we’ll talk to one of the people responsible for the gray wolf’s resurgence, ED BANGS. He’s northern Rocky Mountain Wolf Recovery Coordinator for the US Fish and Wildlife Service.  And, we’ll also check in on some other species under threat – amphibians and bats. Amphibians around the world are disappearing – 40 percent of frogs, toads and salamander species are in decline and as many as 500 species are endangered.  Amphibian ecologist VANCE VREDENBURG from San Francisco State University will tell us what’s going on – his lab recently identified the culprit behind the declines.  And finally, we’ll check in on the brown bat, which has been ravaged by white-nose syndrome, a fungus that is decimating bat populations across the United States.  Bucknell University biologist DEEANN REEDER fills us in on the effort to understand and stop the deadly fungus.

Don’t bother bagging your fallen leaves. Your yard (and insects) will thank you

Fallen leaves make great natural fertilizer and offer a place for insects to spend the winter.

As the climate changes and brings more risks to the traditional farming schedule, farmers are looking for ways to make sure their crops survive.

This American chestnut was discovered by chance when a hunter recognized it. The Delaware Nature Society led its first expedition to the rare tree.