In the days following the historic announcement that Kamala Harris would be the running mate of former Vice President Joe Biden, the California senator received mostly plaudits from the Indian American community.

However, there have been some Indian Americans, and even individuals in India, who have criticized Harris for not more openly embracing her Indian heritage, particularly her mother Shyamala Gopalan’s Hindu background.

But Harris’ perceived distance from her Indian heritage — she identifies as a Black Baptist — misses an important point about race in America: Her mother didn’t have much of a choice when raising two biracial daughters in the 1960s and 1970s.

Gopalan came to the U.S. shortly before the end of the Johnson-Reed Act, also known as the Asian Exclusion Act, which effectively barred all Asians — including those of Indian origin — from immigrating to the U.S. from 1924 until its repeal in 1965.

For Shyamala Gopalan and Donald Harris, the U.S. was — and in some ways still is — defined by a Black-white dichotomy. Moreover, the “one-drop rule” that defined anyone with African ancestry as Black — and therefore relegated them to second-class status — still permeated post-Jim Crow America.

With both parties actively courting South Asian American voters, Harris' presence on the Democratic ticket could have an impact in a critical swing state like Pa.

So when Gopalan chose to raise her two daughters as Black girls in Northern California, it was a decision guided by the social realities of race in America and the lack of support any biracial immigrant children would have had at the time. Even if young Kamala had tried in any way, shape or form to acknowledge her biracial identity, she would have still been seen — and judged — through the lens of Blackness.

Gopalan raised Kamala and Maya Harris to be Black women who could, from time to time, at least connect with their maternal heritage when they visited Tamil Nadu, India. It’s a rite of passage for the children of many immigrants from the Indian subcontinent, including me.

My parents were among the first wave of post-1965 immigrants to come to the U.S. (my father came via Canada), and it took over a decade for the Indian American community, particularly Hindus, to establish any lasting presence in the towns and cities they settled in.

As someone who is over a decade younger than Harris, my experience of not growing up around any Indian or Hindu cultural centers markedly shaped my own perspectives growing up. Looking back, I give my parents a lot of credit for raising my siblings and me as practicing Hindus, despite not having much of a support network around us in the Philadelphia suburbs.

As a result, my own identity has been more nuanced. I identify strongly as Hindu, but not necessarily as Indian American, and that’s been more of my choice. For Kamala Harris, those choices weren’t available, and her own journey to navigate her identity is a struggle that many children of immigrants — and many biracial Americans — can relate to.

Even if there are critics within the Indian American community who might disagree with her policies or statements on issues, criticizing her for growing up in a different era is simply off the mark. When Sen. Harris formally accepts the historic vice-presidential nomination this week at the Democratic National Convention, it will be a culmination of her late mother’s prescient efforts in understanding the complexities around race, religion and identity in America, and raising her daughters accordingly. 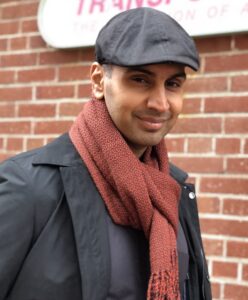 Murali Balaji, Ph.D., is a journalist, author and academic with nearly 20 years of experience in diversity leadership. He currently serves in diversity leadership and as a lecturer at the Annenberg School for Communication at the University of Pennsylvania. He is the founder of Maruthi Education Consulting, consulting several congressional campaigns on cultural competency.

Latino advocacy groups across Pennsylvania said there were only a handful of incidents in which Spanish-speaking voters had trouble with language assistance.

Both parties have important lessons to learn from Election Day

Democrats can no longer treat demographics as destiny, while the GOP would be wise not to disenfranchise their own potential voters, writes Murali Balaji, Ph.D.

Biden now must shift toward action with the looming uncertainty created by the coronavirus pandemic’s disparate impact on Black Americans and people of color.