Alexis I. du Pont High School has become familiar territory for Joe Biden. It’s where he cast a vote for himself and Barack Obama in 2012. Afterwards, he told reporters who asked if that would be his last time he voted for himself, “I don’t think so.”

He was there for a campaign speech at the end of June and returned to the Greenville school this afternoon to make his first public appearance with Kamala Harris as his running mate.

“I wish we could talk to everyone outside, but we’re social distancing and playing by the rules,” Biden said as he started his remarks inside the school’s gymnasium.

Biden called on supporters to defend Harris after President Trump said she was “extraordinarily nasty” to Supreme Court nominee Brett Kavanaugh during his confirmation hearing.

“Is anyone surprised Donald Trump has a problem with a strong woman?” Biden asked. “We know that more is to come.”

“Kamala Harris has had your back, and now we have to have her back,” he added.

Harris settled into the traditional role of VP candidate, acting as both chief advocate for Biden and leading the attack against the incumbent. The former prosecutor called out Trump’s handling of the coronavirus pandemic among other issues. “The case against Donald Trump and Mike Pence is open and shut,” she said. “He inherited the longest economic expansion in history from Barack Obama and Joe Biden. And then, like everything else he inherited, he ran it straight into the ground.”

More than two hours before Biden and Harris spoke, folks started gathering at the school just outside Wilmington, hoping to catch a glimpse of the pair.

While Delawareans have grown accustomed to, and even a little blasé about, Joe Biden’s public events, the excitement was palpable waiting for Harris and Biden to appear.

Under cloudy skies that threatened a downpour, about 300 admirers, campaign workers and media members swarmed the grounds. Some carried Biden campaign signs, one homemade sign said, “Representation matters Kamala.” There were also a few anti-abortion protesters.

Debbie Harrington of Middletown and two of her Alpha Kappa Alpha sorority sisters were hoping for a glimpse of Harris and that she might recognize them from their pink and green AKA colors.

Harrington, a retired Army colonel who is on the Board of Trustees of Delaware State University, said she’s heartened by Biden’s selection of Harris.

“It speaks to America and what we need right now,’’ Harrington said. “[With] all that’s going on with the coronavirus, the disparities that are showing up as a result of that, and then the racial strife… It’s significant to have, for the first time on a major ticket, a woman of color.”

Harris’ mother was born in India, and her ancestry delights Disha Shetty, an Indian citizen who is in Delaware with her husband Chetan on an employment visa. 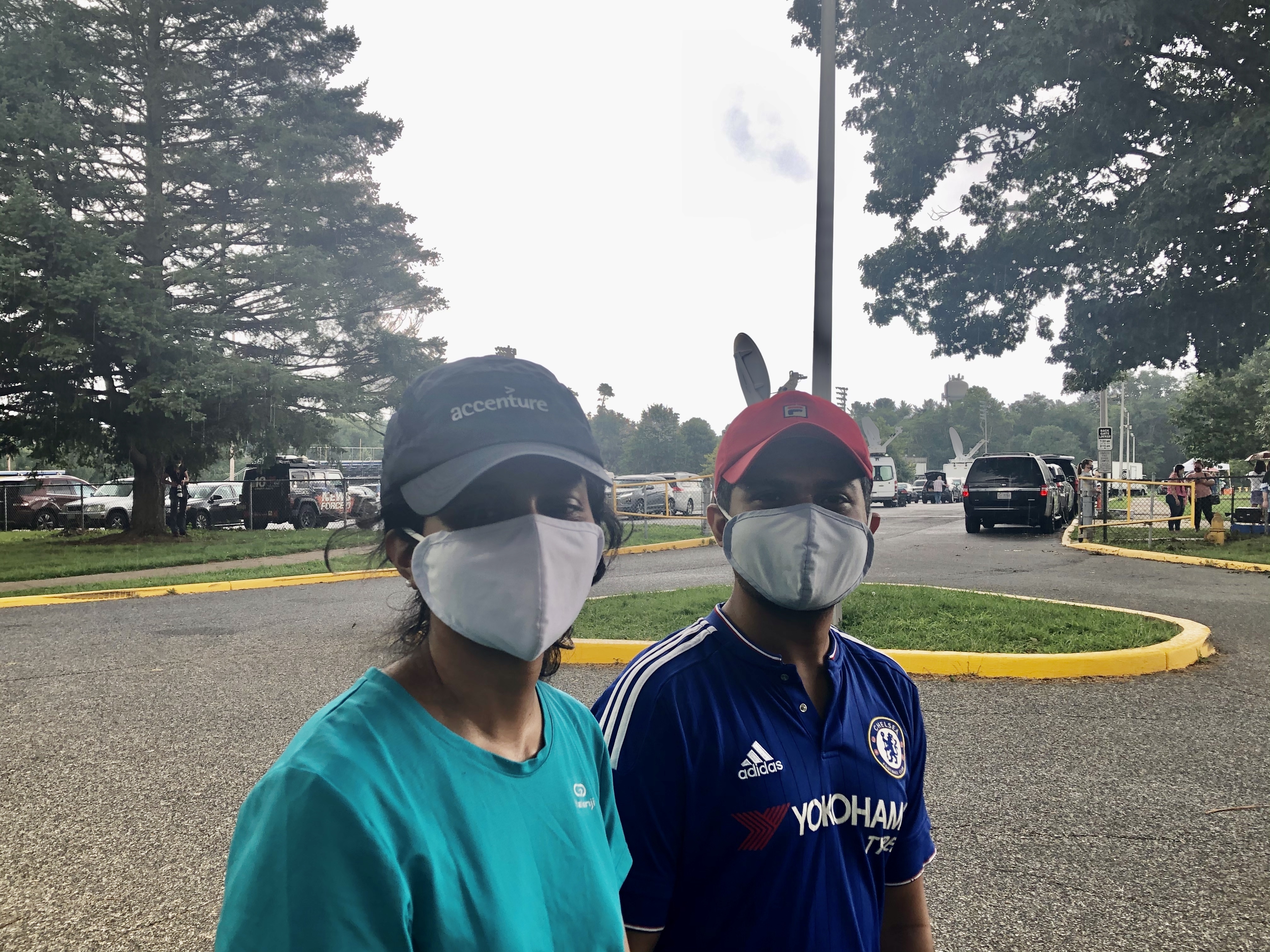 Disha and Chetan Shetty support Biden and Harris, whose mother was born in India. (Cris Barrish/WHYY)

“The whole concept of this country was built on immigrants, how eventually they naturalized and got their voting rights’’ Shetty said. “As opposed to the other camp, where they are quite anti-immigration. It’s a significant thing for us.”

Inside, Biden said he came to know Harris through his late son Beau Biden. The younger Biden served as Delaware’s Attorney General at the same time Harris was AG in California. Even five years after his death, Beau’s high opinion of Harris influenced his father’s VP selection. “I know how much Beau respected Kamala and her work, and that mattered a lot to me, to be honest with you, as I made this decision,” he said.

Harris said it was Beau who helped her first get to know Joe, too, as they spoke on the phone almost daily following the foreclosure crisis. “I learned quickly that Beau was the kind of guy who inspired people to be a better version of themselves, he really was the best of us,” Harris said. “He’d always talk about his dad, and I will tell you the love that they shared was incredible to watch.”

The daughter of parents who immigrated to the U.S. from Jamaica and India, if elected Harris would become the first Black woman and the first Indian woman to reach the second highest office in the nation. She said Biden has been a leader on civil rights issues throughout his career. “Today, he takes his place in the ongoing story of America’s march toward equality and justice as the only [one] who has served alongside the first Black president, and has chosen the first Black woman as his running mate.”

Biden said he had no doubt he picked the right person to be VP, adding that the campaign more than doubled its best grassroots fundraising day on Tuesday following announcing her selection on Twitter.

Biden shied away from news conferences, interviews in Year 1

President Joe Biden has held fewer news conferences than any of his five immediate predecessors at the same point in their presidencies.

It is another step driven by former President Donald Trump’s baseless claims about election fraud.