Over the past decade, PECO has more than doubled the number of service shut-offs to customers who fall behind on payments. Detecting a similar trend statewide, Pennsylvania’s Public Utility Commission is conducting a statewide study to improve the affordability of gas and electricity. 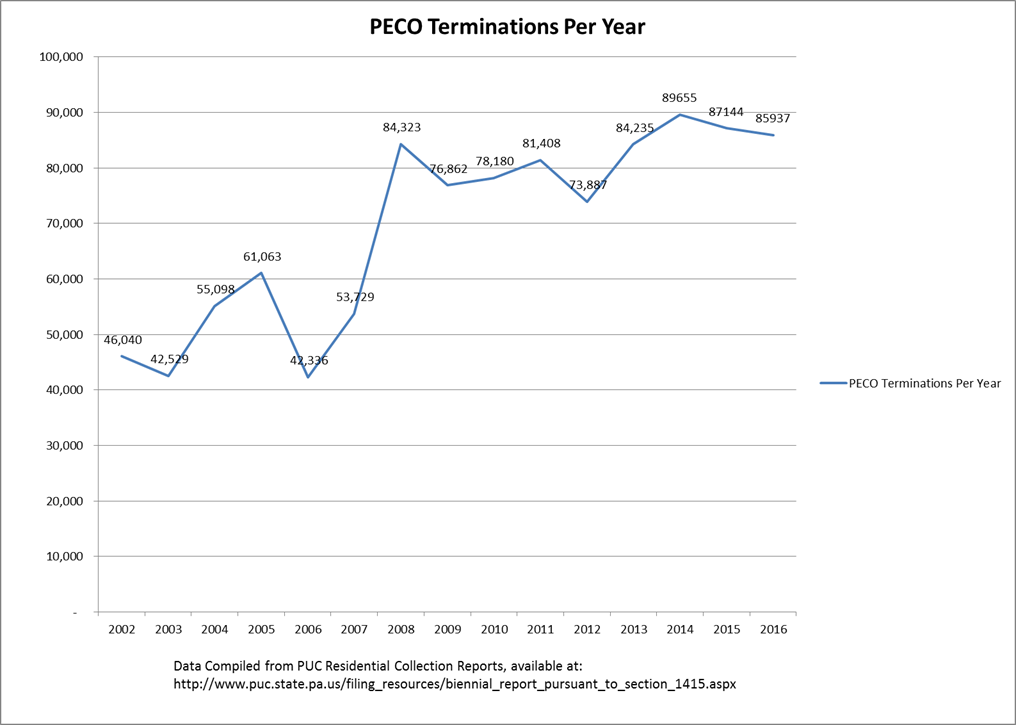 One reason for more shut-offs is that low-income households enrolled in customer assistance programs — or CAPs — are expected to pay a higher percentage of income than what utility companies expect of other customers, said to Robert Ballenger, an attorney at Community Legal Services who specializes in energy policy.

“An average … household in Pennsylvania can expect to pay between 1 and 5 percent of monthly household income for gas and electric,” he said. “In contrast, we have a policy that sets the monthly expectation for low-income families as high as 17 percent.”

So when the Public Utility Commission began researching ways to improve affordability, advocates urged regulators to follow the standard in New Jersey and New York, where customers are not required to pay more than 6 percent of their income on heat and power.

But a 6 percent standard for low-income households would force other customers to pay more, said Doug Oliver, a PECO spokesman.

Right now, residential customers are subsidizing PECO’s customer assistance program. PECO estimates that if the burden were lowered for those in the CAP program, the average customer’s bill would increase by $50 a year. Advocates say the commission should make PECO’s industrial and commercial clients chip in, following the example of the assistance program offered by Philadelphia Gas Works.

Pennsylvania has a moratorium on shut-offs between Dec. 1 and March 31. And yet, the most recent data on statewide shut-offs  indicate that more than 312,000 households had service terminated, compared with an average of 81,000 households in the 1990s.

“I think every little bit helps,” said Ballenger. “The problem is the level of access. We know in Pennsylvania that less than half of low-income customers participate in CAP. We think the [PUC] can restructure the delivery model and make this a statewide program and eliminate the structure where each utility has its own program.”

The PUC’s initial survey of affordability issues is due at the end of November.

PWD and PECO will host virtual seminars through February and March to help customers get started with applications for assistance.

PECO rates are rising as the temperature dips. A cold winter is expected

Philadelphia area residents will see jumps in their heating and electric bills. The Public Utility Commission warns against "sticker shock."

Immigration pros from Community Legal Services and HIAS Pennsylvania clarify who is eligible for benefits such as a healthcare and SNAP.