Voters next month will decide who should be Pennsylvania’s highest-ranking law enforcement official and oversee an agency with about 250 lawyers and a budget approaching $190 million.

They’ll pick a state treasurer, a job that handles billions of dollars in public funds and plays a critical role in financing government.election

And they will choose who will be the state’s next auditor general, a position charged with uncovering governmental waste and wrongdoing.

Two of the three Democrats currently serving as statewide row officers, Attorney General Josh Shapiro and Treasurer Joe Torsella, are seeking reelection. Both are under fire from challengers for what they consider to be the incumbents’ distracting ambition for 2022 races for governor and U.S. Senate.

The third job is open because Auditor General Eugene DePasquale is term-limited and running for a Harrisburg-area congressional seat.

Voters may overlook the row offices, with legislative and congressional races devouring whatever attention isn’t absorbed by the presidential race. But the attorney general, auditor general and treasurer often end up in the middle of Capitol policy debates, and the jobs can be a springboard to higher office.

Your 2020 guide to voting in Pennsylvania

Pennsylvania is dealing with a huge mail-in voting spike, sluggish mail, a slew of lawsuits and mail-in-ballot laws that could change. Here’s what you need to know.

Heather Heidelbaugh, a lawyer from Mount Lebanon and former Allegheny County Council member, received the Republican nomination to take on Shapiro after running unopposed in the primary.

Heidelbaugh, 61, has described Shapiro as lacking experience as a courtroom lawyer and an attorney general who has chased headlines to feed his political ambition. She cites his recent and repeated publication of coronavirus-related price gouging cases.

“It’s not a stepping stone, it’s a destination,” she said of the job in a campaign video.

On what Heidelbaugh calls her top priority, criminal prosecutions, she hopes to start her term by convening a meeting of county district attorneys to help determine the best direction in the fight against opioids and methamphetamine.

Her campaign’s television advertising has linked Shapiro to murder rates in Philadelphia and statewide and she says she wants the office to exercise its authority to take over more gun prosecutions in Philadelphia.

Shapiro, 47, a resident of Abington, is a former state lawmaker and Montgomery County commissioner who’s seeking a second term.

He took over following the debacle that was Democrat Kathleen Kane’s term in office. Kane resigned in the fourth year of her term after being convicted of fraud and later served jail time.

Shapiro says he’s rebuilt the agency with “a track record of accomplishments” and boasts of being the state’s “most progressive and effective” attorney general.

Shapiro oversaw the investigation that culminated in the August 2018 release of a grand jury report that found about 300 Roman Catholic priests in Pennsylvania had sexually abused children for seven decades, and that their higher-ups helped cover it up.

Heidelbaugh criticized Shapiro’s handling of the report, saying the incumbent should not have made public details in the report about criminal conduct that was not the subject of criminal charges.

“In this case, when you have a horrific factual situation, it’s easy for the public to concentrate on the horror of the nature of the allegations and to concentrate less on the constitutional due process rights of the accused,” she said.

Shapiro said such reports are lawful in Pennsylvania and he would have charged more of the priests, but the statute of limitations in place at the time prevented it.

The priest abuse investigation has featured prominently in Shapiro’s campaign messaging, along with his role in brokering a deal that resolved a major dispute between western Pennsylvania health care insurers.

Shapiro is widely expected to seek his party’s gubernatorial nomination in two years, when Democratic Gov. Tom Wolf is term-limited, although he has not announced his intentions. He calls Heidelbaugh’s criticism of him as a career politician “flat-out silly.”

The minor party candidates on the ballot are Libertarian Daniel Wassmer and Richard L. Weiss, the Green Party standard-bearer.

Thinking about voiding your mail-in ballot? Experts say you should think twice

Some Philly voters that requested mail-in ballots now want to vote in person— and the trend has experts worried that these Election Day audibles could do more harm than good.

Torsella, who is also considered a potential gubernatorial or U.S. Senate candidate, said his major accomplishments in office include setting up a scholarship program that begins for children at birth and leading a lawsuit against large Wall Street banks over their bond fees.

The lawsuit resulted in a nearly $400 million settlement over the price fixing claims, money that’s being split with other plaintiffs. He has also moved more of the state’s investments into index funds, putting the state on track to save hundreds of millions of dollars in investment fees in the coming decades.

“I think we’ve been sending too much money to Wall Street and leaving too little in the hands of Pennsylvanians,” Torsella said. He established the Keystone Scholars program, which provides $100 to open an account for every child born or adopted in Pennsylvania for use one day for higher education. 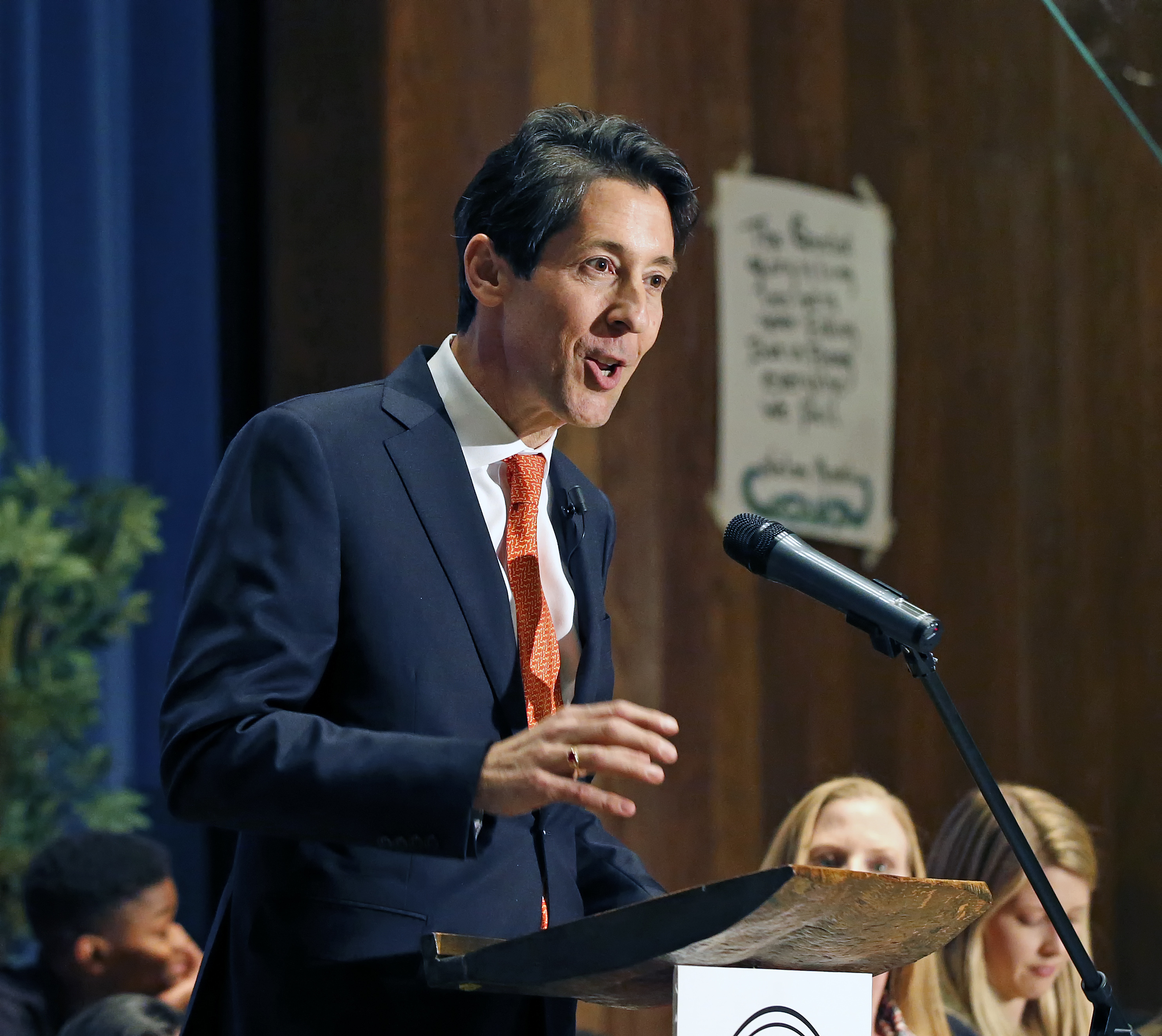 Torsella, 57, a resident of Flourtown, served as President Barack Obama’s envoy for United Nations management and reform, headed the National Constitution Center and was then-Gov. Ed Rendell’s choice to serve as chairman of the Pennsylvania State Board of Education.

Torsella said in a second term he would push to have the state establish a Treasury-administered system of portable retirement accounts for people whose workplaces don’t offer them.

The Republican challenger is Stacy Garrity, 56, who retired as a colonel in 2016 after 30 years with the U.S. Army Reserves. She is currently vice president of a tungsten smelting plant.

Garrity, who lives in Athens, Bradford County, wants to use the Treasury Department’s leverage to push lawmakers and the governor to limit state government spending to money that has been formally appropriated by the Legislature and end what has been a regular practice of the executive branch spending money outside the pre-approval process.

“I think we need some checks and balances on the governor,” Garrity said. She wants to address shortcomings in how the state has handled unemployment compensation during the pandemic.

Garrity also is pledging to complete a four-year term, a challenge directed at Torsella’s potential runs for other office. Torsella, who isn’t saying what he might run for in the future, calls Garrity’s pledge “a silly campaign gimmick.”

DeFoor is Black and Ahmad was born in Bangladesh, so in January the state’s first elected row officer of color will begin work.

Ahmad, 61, who has a doctorate in chemistry, has said she wants to expand the office’s traditional watchdog role so that it also examines how equitably public money gets distributed. She wants to focus on charter schools and do what she can to expand high-speed internet access to underserved parts of the state.

“I see this job as a leadership job, which should be part of the strategic vision for Pennsylvania,” Ahmad said. “All these audits that we do really are a reflection of one, how the money was allocated, how it was used and what were the outcomes.”

Before going into public service, she worked on the molecular genetics of inherited diseases, particularly eye diseases.

DeFoor, 58, the elected controller in Dauphin County, which includes Harrisburg, touts his experience as providing unique qualifications for the job.

He has spent three decades conducting governmental audits and fraud investigations for the state inspector general, the state attorney general and a large hospital system.

DeFoor wants to institute special audits that will use outside consultants to gain specialized information and focus more on “quality management” audits that check the effectiveness of government programs once they have been in place for some time.

The Green Party candidate for auditor general is Olivia Faison, and the Libertarian is Jennifer Lynn Moore.

Sign up for Your Vote 2022, a free email newsletter breaking down the 2022 midterm elections in Pennsylvania, New Jersey, and Delaware.

During Pennsylvania’s 2022 midterm election, members of Shapiro’s transition teams gave $805,000 to his campaign.

We'll talk about the election results and the races still being tallied and what they tell us about the voters, the issues and where the country is headed.