Are you on the front lines of the coronavirus? Help us report on the pandemic.

U.S. Surgeon General Dr. Jerome Adams over the weekend told Americans to brace for a week that would define a generation — with projections showing that many thousands would soon die from the COVID-19 contagion.

But revised projections released Sunday by the University of Washington’s Institute for Health Metrics and Evaluation, the same projections used in recent White House briefings, show that states like Pennsylvania may be faring better than others –– nearing a peak of new infections with a projected surplus of hospital beds.

The IHME puts Pa. just five days away from peak hospital usage, with an estimated surplus of some 14,000 hospital beds.

Estimates put the state nine days away from a peak in daily deaths –– 32 deaths per day, by April 15th.

As of Monday, 162 people in the state had died from the virus with another 1,537 people in Pennsylvania hospitalized from COVID-19 and nearly a third of them on ventilators. The majority of cases are clustered in the Philadelphia region, which is also the state’s most populous area.

The initial models for the United States created by the IHME were based only on data out of Wuhan, China. Now that several more cities in Italy and Spain have reached their peak of hospital resources and deaths, the institute has more information on which to measure the relationship between social distancing measures and the virus’ impact.

The revised projections show lower estimates nationally for hospital bed use and cumulative deaths during the first wave of COVID-19 infections.

“It’s a surprisingly accurate model. Their predictions of what today would look like three weeks ago are very good,” said Dr. Mark Roberts, director of the Public Health Dynamics Lab at the University of Pittsburgh.

‘I am just panicking’: Small businesses scramble to apply for shutdown loans

Small business owners across the country are rushing to apply for $350 billion in federally-guaranteed loans. But there have been issues applying through community banks.

Although the IHME model found the worst days were still ahead, it puts the US about nine days away from the peak of COVID spread. Among other factors behind the more optimistic revision, the latest adjustments take into account the positive impacts of social distancing, according to the IHME.

Pennsylvania health officials are watching the IHME projections, among others, and were cautiously optimistic in response to Sunday’s adjustment.

“While we are hopeful that our social distancing and mitigation efforts have been successful, the model assumes full social distancing through May of 2020,” said Nate Wardle, spokesperson for the Pennsylvania Department of Health.

IHME estimates varied heavily from state to state. While Keystone State may be ahead of the curve, researchers still expect a shortage of some 36,000 beds nationally by peak hospitalization, according to the latest projections.

Employees at MOM’s Organic Market in Center City Philadelphia say their concerns about sanitation have been ignored.

The IHME put the Garden State nine days away from peak hospitalization, with an estimated shortage of some 16,887 beds –– nearly half of the beds needed nationally, in just a single state. Much of the remaining bed shortage is in New York state, which has similarly struggled to contain the spread of the virus.

Unlike many other parts of the U.S., New Jersey’s death total moved upwards, to a peak of nearly 600 deaths in a single day, according to the model.

“The reason for the increased peak daily deaths projections is increasingly more deaths being reported in New Jersey over the last few days,” IHME methodology reads. 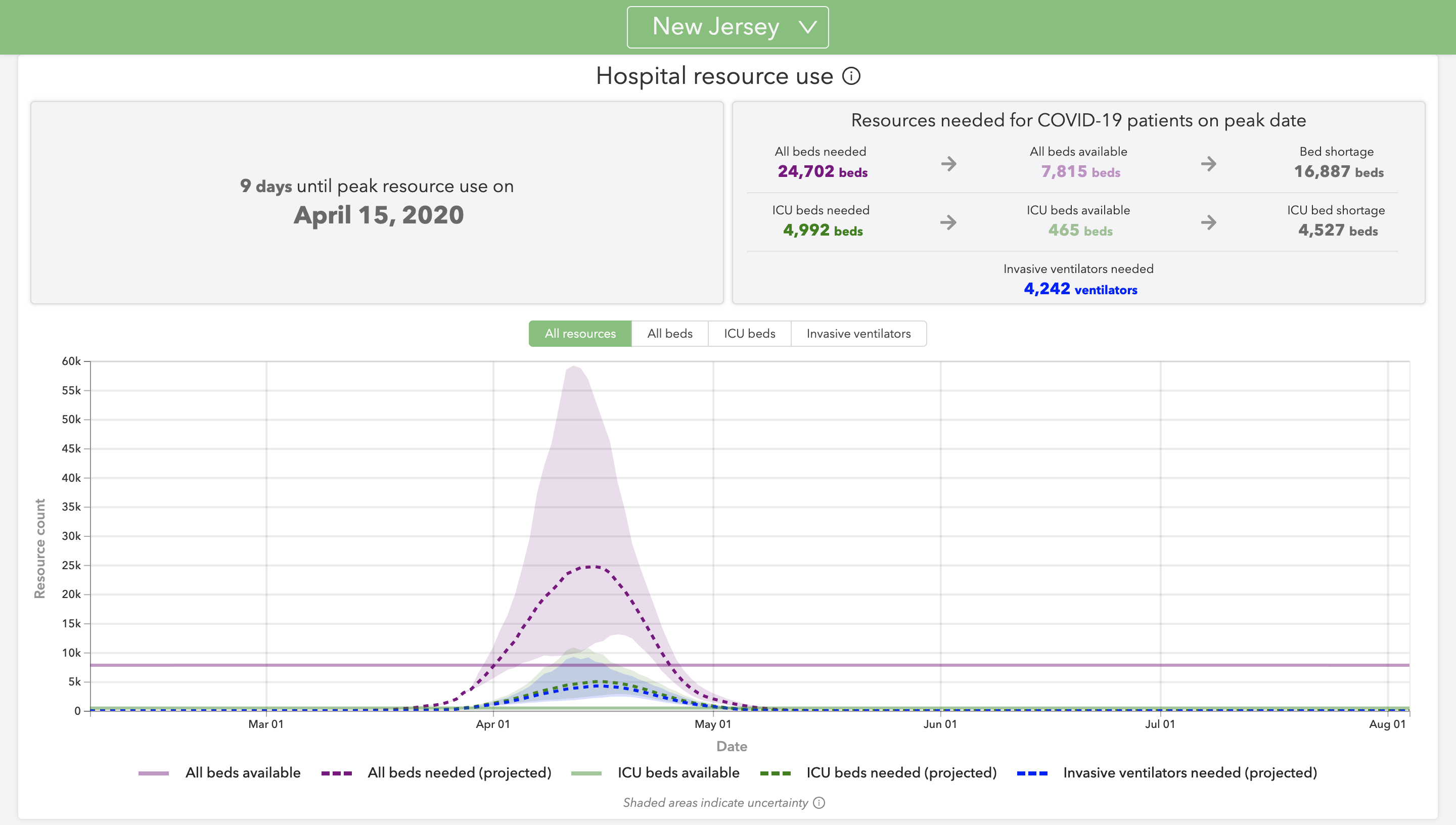 Based on IHME’s model, New Jersey’s hospitals may have reached maximum capacity on April 2. While Pennsylvania is currently projected to weather the crisis with a surplus of hospital space, New Jersey would need to drastically increase the number of available beds by April 15.

However, an uneven distribution of cases throughout New Jersey, and hospitals’ diverting cases to ambulatory centers or other nontraditional areas for acute care, has helped delay this overload. And the IHME model does not totally account for state’s adding space.

“Our hospitals have been working to double their critical care capacity,” she said. “We are aggressively working to open alternate care sites.”

Pennsylvania hospitals, too, have largely canceled elective surgeries and taken other steps to add beds for COVID-19 patients.

Wardle also said his department would assess Pennsylvania’s ability to absorb patients from other states if and when that time comes. He noted that some parts of the state may not have beds to spare.

“Even if we do see a surplus, that would be statewide and may not represent the ability for eastern Pa. hospitals to take on extra patients,” he wrote in an email.

There are more than 5,100 ventilators in the Pennsylvania hospital system, and 70% are available. Of the state’s 3,400 licensed ICU beds, 60% are currently in use.

Roberts, who had helped author a more pessimistic projection of COVID-19 spread in Pennsylvania last month, also expressed concern about elements of the IHMC methodology.

“In their model, they say they’re maintaining social distancing the whole time,” he said.

“If you maintain social distancing levels seen in China, that might work. But if you remove it and you don’t have herd immunity levels, the virus will come back.”

Assuming that the rampant spread of COVID-19 does begin to slow after a deadly peak, the physician said the future depends on the choices the states, and the nation as a whole, make in determining what to do next.

Roberts was personally skeptical that officials could resist the temptation to reboot a largely idled economy, especially in the face of numbers that indicate the infection is slowing.

Early demand for the new COVID-19 bivalent booster vaccines is off to a slow start. Health providers and residents say It could be the new normal.

Should I get an omicron booster shot? Delaware Valley experts share what you need to know

New COVID-19 booster vaccines are making their debut this fall, and they’ll be available to most adults.

Post-mortem review of N.J. response to COVID to happen ‘within a matter of weeks’

Gov. Phil Murphy says a review of how New Jersey responded to the COVID pandemic will happen “within a matter of weeks” after being pressed on national television.