Nearly six months into the school year, the majority of Pennsylvania schools have not opted into a free, on-site COVID-19 testing program provided by the state health department.

While participation in the program has doubled since the fall, only 750 of the state’s more than 5,000 charter, private, and public schools enrolled as of Feb 16. Of that total, roughly half are actively testing, with others still in the onboarding process.

“That’s not enough,” Acting Secretary of Health Keara Klinepeter said during a news briefing in early February, adding that the state continues to “do further outreach” to encourage participation.

School testing programs across the country have struggled over the fall and winter to gain momentum as officials juggled competing crises: outbreaks fueled by the delta and omicron variants, and exhausted school staff.

“I don’t think Pennsylvania is unique in this case,” said Christine Pitts, a policy fellow with the research organization Center on Reinventing Public Education, which has been tracking state and school responses throughout the pandemic.

Roughly 25% of Pennsylvania’s 500 public school districts use the state’s program, which is administered by Ginkgo Bioworks, a Boston-based biotech company. Some schools in the southeastern part of the state use a different testing program independent of the state health department.

Health officials initially estimated the federally-funded Gingko program could cost the state up to $87 million for services including tests, medical and administrative support, and program fees. A spokesperson for the state health department said Gingko billed for just $8.2 million as of Jan. 25, another sign of the program’s sluggish rollout.

When pressed about why more schools aren’t signing up, Klinepeter turned the question back on local schools: “I would ask you to go ask the schools why they’re not participating, why they’re not doing their part to protect kids and teachers.” 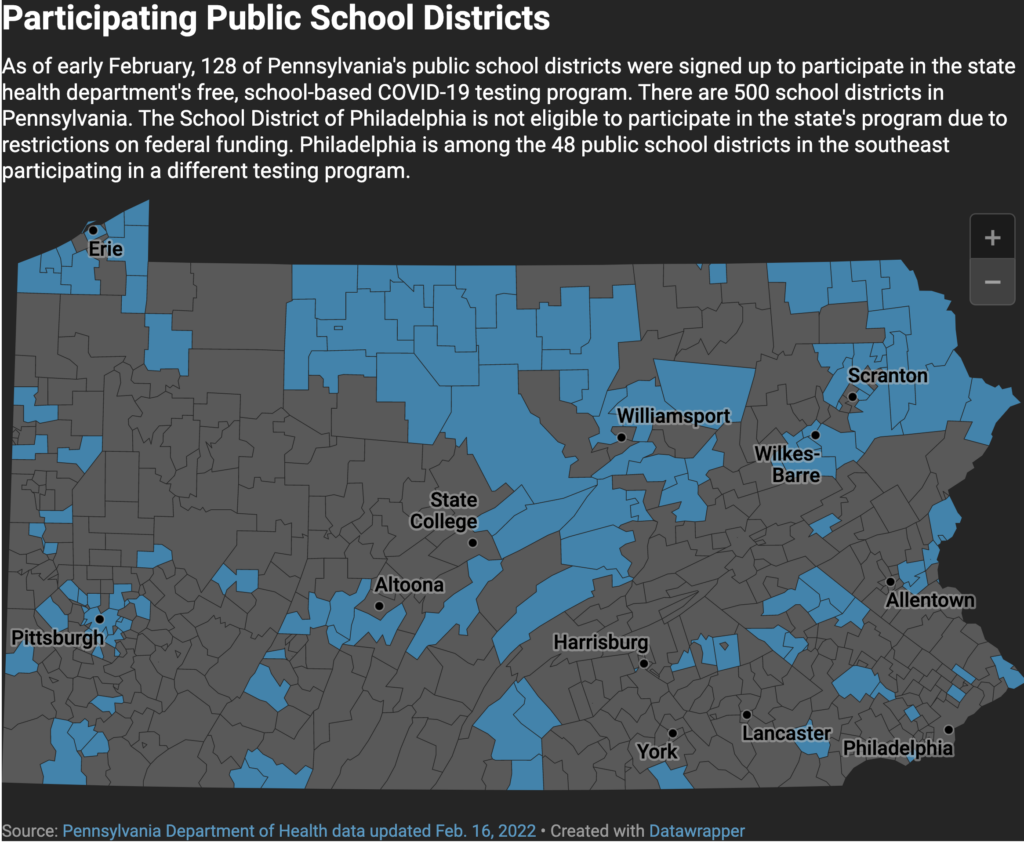 What’s the holdup on COVID vaccines for kids 4 and younger?

The FDA’s surprise announcement Friday set the expected schedule for vaccine eligibility for the youngest Americans back several months.

‘Their plates are so full’

For some schools, the answer to Klinepeter’s question isn’t political, but practical.

Charleroi, about 30 miles south of Pittsburgh, is one of 12 school districts in Washington County — which has 14 public school districts — choosing not to participate in the state’s testing program. Superintendent Edward Zelich said his staff is stretched so thin, “I don’t have the heart to say we’re going to add one more thing now.”

Zelich said the rural district, which serves roughly 1,400 students, has used other tools to keep people safe. It requires students and staff to wear masks while the county is in what the CDC identifies as a “high” level of COVID-19 transmission. The district also hosted several vaccination clinics during the fall and winter. School nurses diligently trace close contacts of students or staff who’ve tested positive for the virus, even pulling security camera footage from the cafeteria to see who a student might have socialized with. Since the start of the school year, about 820 students and staff have had to quarantine after testing positive or being exposed to the virus.

Asking the district’s nurses to take on COVID-19 testing would increase their work tenfold, Zelich said. In addition to the two building nurses, the district recently hired a third nursing assistant to float between the offices for extra support.

“Their plates are so full,” he said.

On an average day at Charleroi Elementary School, which serves students in pre-K through fifth grade, school nurse Heather Fox-Sutek might see as many as 40 students.

Bumps and scrapes, upset stomachs and fevers, administering blood sugar tests or dispensing scheduled medications — COVID-19 is just one of the many ailments on her radar. At least one of the 750 students under her care seems to be in her office at all times.

“There’s still the ability for something to go very wrong because we have kids who are medically fragile,” she said, adding that it’s impossible to predict when she might have to drop everything and respond to a medical emergency such as a student having a seizure or an allergic reaction.

That doesn’t account for the hundreds of hearing, vision, height, and weight screenings she is required by the state to administer during the school year. And then there’s the paperwork: immunization records, doctors’ notes, and student health plans.

Cannon, who works in the middle and high schools, described the responsibilities added by the coronavirus pandemic — identifying close contacts of sick students or staff, calling parents, managing changing quarantine guidelines, and breaking the bad news about postponed events — as “a whole other job,” one that can be emotionally draining.

“It’s overwhelming,” Cannon said. “In theory, it would be good. We just don’t have enough manpower.”

A look inside the program

Pennsylvania schools have been struggling to manage outbreaks among staff and students caused by the aggressive delta and omicron variants since the start of the school year.

Cases among school-age children, ages five through 18, rose steadily throughout the fall before spiking in late December, just as students were set to return from the holiday break, state data show.

“For those kids who aren’t vaccinated, it does pose a risk and so yes, I am concerned. And yes, we are continuing to work to increase pediatric application,” Klinepeter said. 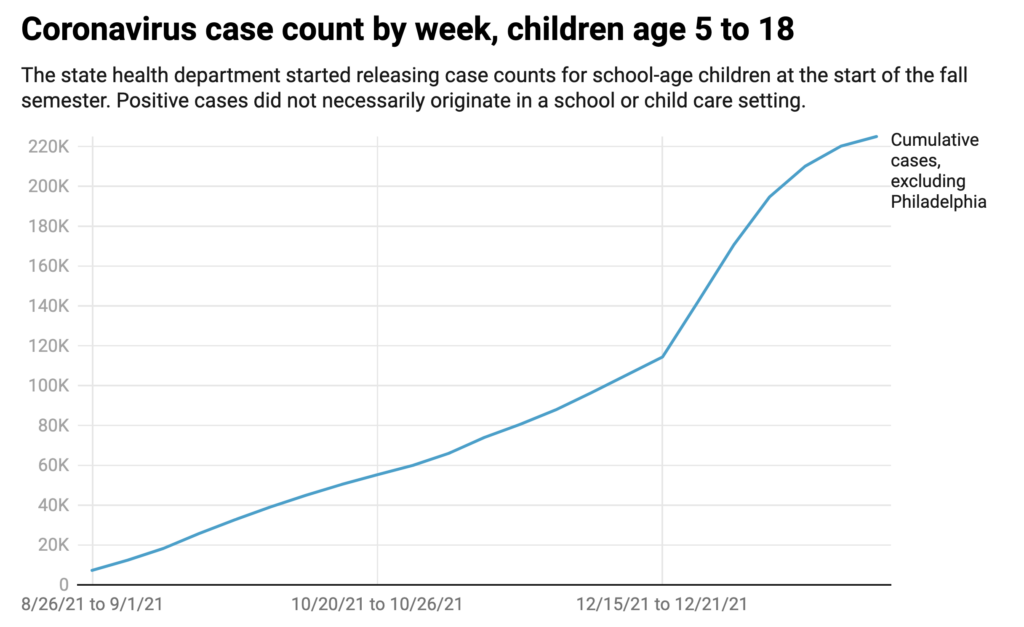 Many schools have toggled between in-person and virtual instruction as they deal with staff absences and a dire, statewide shortage of substitute teachers. Confusion over how to implement the state health department’s mask mandate for schools and child care centers exacerbated many of those issues.

Some schools challenged the health department’s authority to issue the mandate and state lawmakers — in their capacity as parents — took the former health secretary to court. The Pennsylvania Supreme Court in December ruled in their favor, striking down the rule and leaving decisions about masking up to local leaders. Additional legal disputes in some public school districts have followed.

It was against this backdrop that the state health department in July hired Ginkgo to administer its in-school testing program. Funded by a CDC grant for the 2021-22 school year, the program was designed to catch outbreaks early and keep students in classrooms. Schools are eligible to participate at no cost and can choose from several testing options, including rapid antigen tests and weekly pooled testing. Individual students or staff may opt out.

Exactly how testing is implemented differs by school.

Students and teachers at schools that use pooled testing are typically tested weekly. Each person swabs their own nostril and the samples from specific groups — like a homeroom class, for example — are mixed together. Results are returned in a day or two and show whether the virus is present among that group. If the result is negative, it’s likely no one in that group is sick. But if the pooled test is positive, someone in that group may have COVID-19. At that point, follow-up testing is necessary.

The Mt. Lebanon School District, which serves about 5,300 students in the southwest Pittsburgh suburbs, was one of the earliest adopters of the program and has been using pooled testing. It’s one of Allegheny County’s 18 public school districts — out of 43 — using the state program.

“During our participation over the past 15 weeks, we have found the program to be beneficial in detecting asymptomatic individuals,” said Kristen James, a spokesperson for the district.

Others, like the California Area School District in Washington County, keep rapid antigen tests on hand for any student or staff member who requests one. The district in January also started using the test-to-stay model, allowing students who were exposed to the virus to remain in class as long as they wear a mask and repeatedly test negative.

The small, rural district on the eastern edge of Washington County borders the Charleroi School District, and for months was the only one in the county to use the state program. A second district, Avella Area, started the onboarding process in early February.

Having tests available at school eases the burden on families who might have trouble tracking down an at-home test or finding an appointment at a pharmacy, which could take several days or require a long drive, said California Area Superintendent Laura Jacob.

Jacob said she and two other administrative staff members conduct all of the testing and contact tracing for the district, which is mask-optional for its 910 students. They’ve administered about 1,500 tests since the fall, she said.

“The kids want to stay in school,” she said. “I want to keep staffing fairly consistent. I can’t get kids to learn if I don’t have them here, so to me, it’s worth all of the work and effort.”

On the other side of the state, the School District of Philadelphia has continued to partner with the Children’s Hospital of Philadelphia PolicyLab to participate in a different school testing program called Project Ace-IT. Because it received separate federal funding for COVID-19 relief efforts, the district is not eligible to use the state testing program.

As of mid-January, Project Ace-IT had enrolled 48 public school districts in the southeastern Chester, Delaware and Montgomery Counties — up from 43 in the fall — along with several technical schools, intermediate units, and private schools, for a total of 742 individual test sites, said Christina Procacci, Project Ace-IT operations manager.

Health officials have not yet decided if the state’s program will be extended to the next school year.

More than $67 million in federal grants will be made available to help improve safety at schools in Pennsylvania, New Jersey, and Delaware.

Across Philadelphia, teachers are grappling with how to discuss Tuesday’s shooting at Roxborough High with frustrated and fearful students.

More than 100 educators, advocates, and policymakers assembled Thursday in Harrisburg to discuss the scope of Pennsylvania’s teacher shortage and possible solutions.