Pennsylvania’s policy of rejecting undated and incorrectly dated absentee and mail ballots is more likely to impact voters from communities with larger nonwhite populations, a Votebeat and Spotlight PA analysis of data from three urban counties has found.

Earlier this month a deadlocked Pennsylvania Supreme Court ruled that undated and incorrectly dated mail ballots should not be counted in the Nov. 8 midterm election, the latest development in a years-long dispute over these flawed ballots. Under state law, a person who casts a mail ballot must sign and date a declaration on the outer envelope.

In reaction, some counties released lists of voters who had submitted these types of flawed ballots in an effort to have them rectify the error before the end of Election Day so that their vote would be counted.

An analysis of these lists — released by Philadelphia, Allegheny County, and Erie County between Nov. 4 and Nov. 7 — found that the 3,571 voters submitting the flawed ballots were more likely to come from communities with higher than average nonwhite populations as compared to the voting population as a whole in the county.

Many of the claims in Pennsylvania since the election have focused on misleading explanations for the time it takes to count votes.

“Though [the Pennsylvania Department of State] has not independently confirmed [this] analysis, if accurate, the data you’ve compiled does take a step toward confirming with empirical evidence what we understood to be the case anecdotally,” the agency said in a statement after viewing the findings. “This minor voter error appears to impact specific communities of voters more than others, including older voters, low-income voters and voters in communities of color.”

Oprah Means, a 35-year-old African-American mother of three from Duquesne, Allegheny County, was one such voter. Her ballot was rejected for having an incorrect date — defined by the state Supreme Court as falling outside Sept. 19 to Nov. 8 — and she could not recall what date she wrote that would have been disqualified. She said she was “not at all” surprised to hear there was a racial disparity among rejected ballots.

“It felt like it was done on purpose to me,” Means said, noting that her ballot had been submitted for weeks before she was informed, at 7:40 p.m. on Election Day, that there was an error. 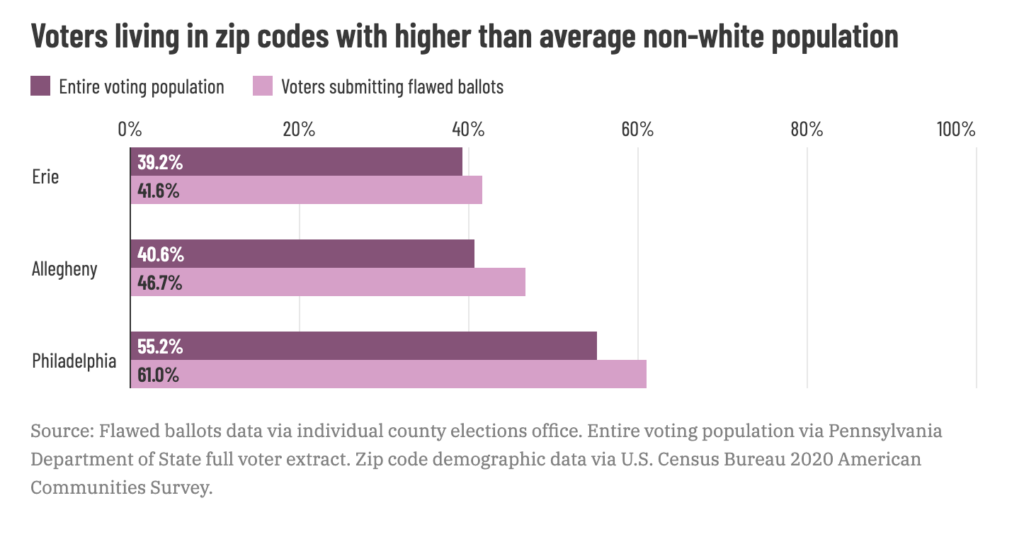 She added that by voting she was trying to set a good example for her 19-year-old daughter.

“It felt just, like, disappointing,” she said. “The people I voted for won, but I was still upset my vote didn’t get counted.”

The disparity was clearest in Philadelphia, where voters who submitted ballots with blank or improper dates were nearly 6 percentage points more likely to come from neighborhoods that have more nonwhite residents than average.

Pennsylvania’s official list of registered voters, which Votebeat and Spotlight PA used for this analysis, does not contain racial demographics for each individual, making it impossible to do exact comparisons of these voters by race. Instead, Votebeat and Spotlight PA used U.S. census data by zip code to identify communities and neighborhoods with a higher than average percentage of nonwhite residents than the county.

Donald Trump is officially running again, trying to avenge his loss to Joe Biden, even as Trump still refuses to admit he lost.

Here’s how that data showed the 6-point disparity among voters: While 55.2% of all registered voters in Philadelphia live in zip codes with higher than average nonwhite populations, 61% of voters who submitted the flawed ballots live in such zip codes.

A similar racial disparity was also found in Allegheny County and, to a lesser degree, in Erie County. In Allegheny, which contains Pittsburgh, voters who submitted flawed ballots were also around 6 percentage points more likely to come from zip codes with higher than average minority populations. In Erie County, that figure was just over 2 percentage points. 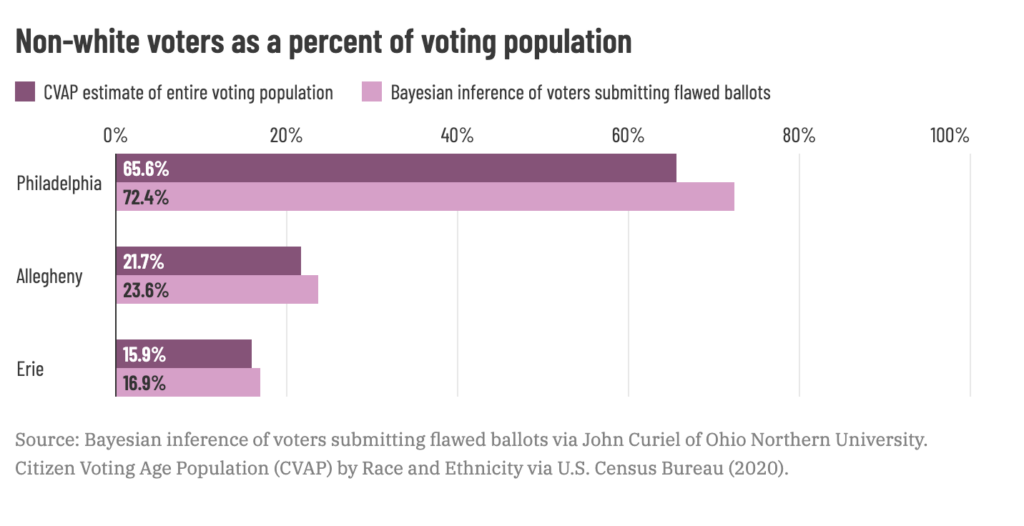 John Curiel, an assistant professor of political science at Ohio Northern University, verified Votebeat and Spotlight PA’s findings using an alternative technique for estimating the races of individual voters in the three counties, based on name and zip code.

His analysis similarly found that there was a roughly 7 percentage point greater number of nonwhite voters among those submitting flawed ballots in Philadelphia as compared to the county’s voting population as a whole. Curiel’s estimates for Allegheny and Erie counties likewise found disparities that support Votebeat and Spotlight PA’s analysis, although without as strong a correlation as in Philadelphia.

Votebeat’s analysis also showed a disparity between the income levels of flawed ballot voters and the voting population as a whole in Allegheny County, but not in Philadelphia and Erie County. In Allegheny, voters submitting flawed ballots were roughly 4 percent more likely to live in ZIP codes with higher than average poverty rates as compared to the county’s voting population as a whole.

When universal mail balloting was introduced to Pennsylvania in 2019 through Act 77, the law required that voters sign and date the outer return envelope.

That portion was challenged in a 2021 case from Lehigh County as violating the 1964 Civil Rights Act’s requirement that a voter’s ballot could not be rejected for reasons that were immaterial to the voter’s eligibility.

Marian Schneider, senior voting rights policy counsel at the ACLU of Pennsylvania, said disparities related to this practice have been known as far back as that case.

“We already know that [rejecting ballots for being undated or having incorrect dates] skews older,” she said.

She said that in the Lehigh case, both sides agreed that the issue had a greater impact on older voters.

While the U.S. Third Circuit Court of Appeals unanimously agreed with the immaterial defect argument in the Lehigh case, the U.S. Supreme Court mooted the ruling earlier this year, as one of the candidates in the race in question had conceded.

That left the question again up in the air ahead of this year’s election, before the Pennsylvania Supreme Court ruled on Nov. 1 that counties should not count the ballots.

But the issue is once again headed toward the nation’s highest court. The ACLU of Pennsylvania, along with the NAACP and several other organizations, is suing the Pennsylvania Department of State in federal court to have these ballots counted. A hearing hasn’t been held yet.

Similar to the Lehigh case, the current case is making the immaterial defect argument and not arguing the practice violated the Civil Rights Act’s protection of certain classes, including race and age, from discrimination.

But Schneider said the lack of a date, or an incorrect date on a ballots, should have no bearing on a ballot’s validity, and when rules are strictly interpreted in such a way, discrimination often follows.

“Whenever you have a strict reading of election rules, it’s going to disproportionately impact low income voters and … nonwhite voters,” Schneider said.

Aseem Shukla of The Inquirer contributed to this report. John Curiel of Ohio Northern University provided Bayesian Inference data analysis. Read more about the methodology of this analysis at Votebeat.

Who will lead the Pennsylvania House? Lawmakers will soon decide as power struggle continues

Have Democrats flipped the Pa. House? The latest on the deciding races

With control of the Pa. state House on the line, attorneys for candidates in two still-uncalled races are haggling over whether to count several dozen provisional ballots.