For the past decade, Philadelphia has been unable to shake its notorious distinction as the poorest big city in the U.S. More than a quarter of the city’s residents live in poverty, meaning a family of four earns less than $25,100 per year. Forty percent of those are struggling to break out of “deep poverty,” with half that income.

These statistics are not new. This has been Philadelphia’s economic reality for so long that the data tends to provoke numbness, in place of anguish.

But the frightening truth is that these numbers aren’t even the full extent of our problem.

The federal poverty line — which dictates official poverty rates — is based on a 1963 algorithm, adjusted yearly for inflation. Over the last 55 years across the United States, this line has dropped so far below cost of living that many economists now use an alternative baseline, set at approximately twice the federal line. Below that it’s virtually impossible to make ends meet without external assistance.

What this means for Philadelphia is staggering: according to calculations by the local research and analysis group the Economy League, 48 percent of the city’s residents— almost half of us — can not provide basic subsistence for our families.

This reflects a societal failure of epidemic proportions. For those of you still feeling numb, think of two Philadelphians you love. Imagine that one of them will no longer be able to put food on the table while also making rent. They face mountains of debt, possibly choosing between school supplies or medical care.

Today, a critical mass of the city’s general interest, ethnic, and community newsrooms have come together to say: enough. We’ve been reporting on poverty for years, but WHYY along with eighteen other local news organizations, have decided to take more direct, and collective, approach. Today we launch BROKE in Philly, an ambitious year-long initiative that will provide in-depth, nuanced, and solutions-oriented reporting on the issues of poverty and the push for economic justice in Philadelphia.

BROKE will take a clear, hard look at what works to help ensure greater economic security for residents of our region, and what doesn’t. We aim to explore poverty’s complex causes and highlight creative approaches that show promise in its alleviation. We will ask questions such as: What’s working in Philly to alleviate poverty and further economic security for all? What has been tried and failed — and what can we learn from that? How are other cities increasing economic equity and what are some lessons for Philadelphia?

Our reporting aims to, piece by piece, examine what it would take to bring about economic justice in Philadelphia— which we broadly define as our city being a place in which a greater number of people are economically secure and thriving. The categories on our site — Earn, Live, Learn, Heal, Keep, Organize, and Love — reflect where we’ve identified opportunity to move the needle.

The best solutions reporting comes from a solid understanding of the roots of a problem. As a start, we have created a graphic, breaking down the major factors that have led to Philadelphia being the poorest big city in America. And there’s one that highlights the way poverty affects varying groups — because we can’t pretend that it touches us all the same. We also aim to be helpful and have compiled an interactive map to locate resources that are critical for those struggling the most. 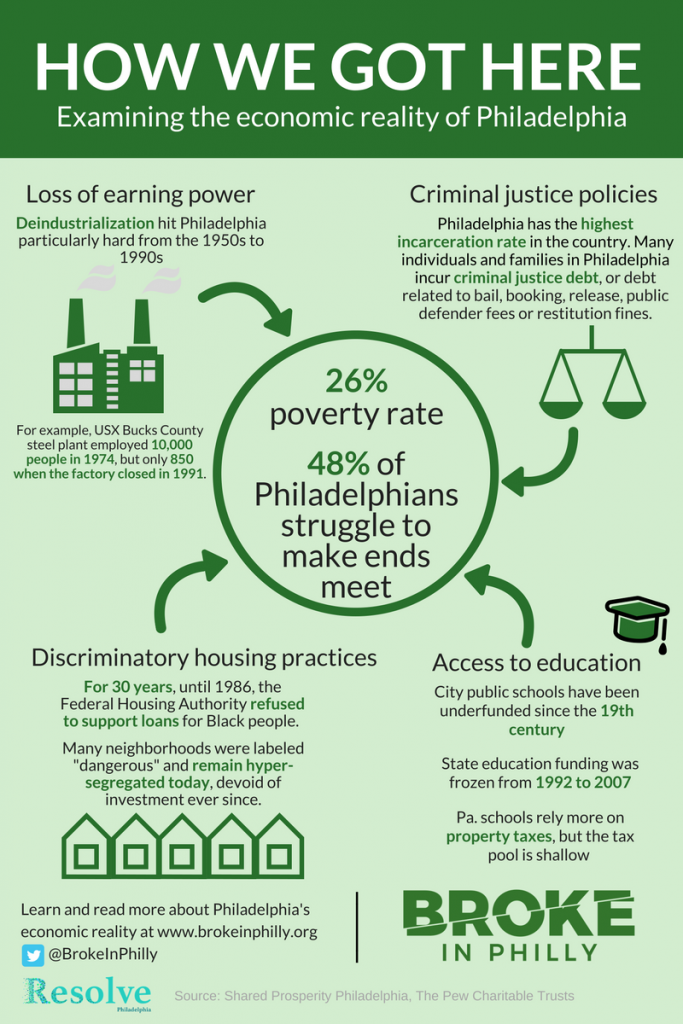 BROKE is led by Resolve Philadelphia, the same collaboration of media outlets who produced the Reentry Project last year, plus some new exciting additions; we are supported by the Lenfest Institute, Klein College of Media and Communications at Temple, and the Solutions Journalism Network. In December, we asked for your input to decide our 2018 topic — receiving hundreds of responses, suggesting over 30 lines of inquiry. From these, we picked the one where it seemed like we could have the most impact.

We hope you’ll continue to help us craft the project. What should we report on? What questions do you have about our city’s economic reality? What else can we as media do to change how we understand and talk about these issues? Drop us a line here or text us at 215-774-3212.

Philadelphia is not alone facing its economic obstacles. Our nation is now so vastly unequal that its founding vision — and one that continues to inspire residents and attract immigrants from around the globe — has become a myth. In January, the U.S. partnership on Mobility from Poverty, a project of the Urban Institute, summed up our national crisis: “For many people, [the American Dream] is the idea that if you work hard, you can get ahead. For others, particularly people who are struggling economically, it is the idea that even if you make little progress, your children will have a chance to do better. Unfortunately, reality no longer lives up to that dream.”

Philadelphia could be unique in how we deal with this challenge. Many other large cities have seen targeted displacement and rising costs of living push those with the lowest incomes out to the suburbs. They got rid of their large-scale poverty problem — without fixing it.

Is that us? We are Philadelphia: city of underdogs who produce miracles. If we can’t use our grit and ingenuity to tackle our biggest collective problem, we’re not living up to our name. Let’s do this, Philly. Let’s win this one.

If everyone who is eligible to receive the child tax credits did, Philly could reduce child poverty by one third.

The ultimate goal was to make students more sensitive as graduated professionals to those grappling with the realities of being impoverished and to better meet their needs.

Despite high poverty, why fewer people live on Philly’s streets than in other big cities

Philly is one of the poorest cities in the country, but it’s street homeless population is one of the smallest. What’s driving this counterintuitive dynamic?