The average American contributes 17 tons of carbon dioxide to the atmosphere every year.

Carbon dioxide is one of several greenhouse gases produced by land use changes, like deforestation and burning fossil fuels — everything from an airplane burning jet fuel during a trans-Atlantic flight to your car’s exhaust on a jaunt around town.

Even the most eco-conscious people have a carbon footprint.

Cool Effect and other companies like it offer corporations and individuals the chance to offset their carbon sins without big changes to their behavior.

“It’s like buying indulgences back in the medieval era,” says Walter Mugdan.

He lives outside of New York City and has been using a carbon offset service for about six years.

“But the difference being buying indulgences didn’t work — I don’t think it got you into heaven — but buying carbon credits does work as long as you’re using a reputable entity.”

Mugdan’s family drives a Prius. They try not to overheat their house and keep it well insulated. But there’s always carbon left over. 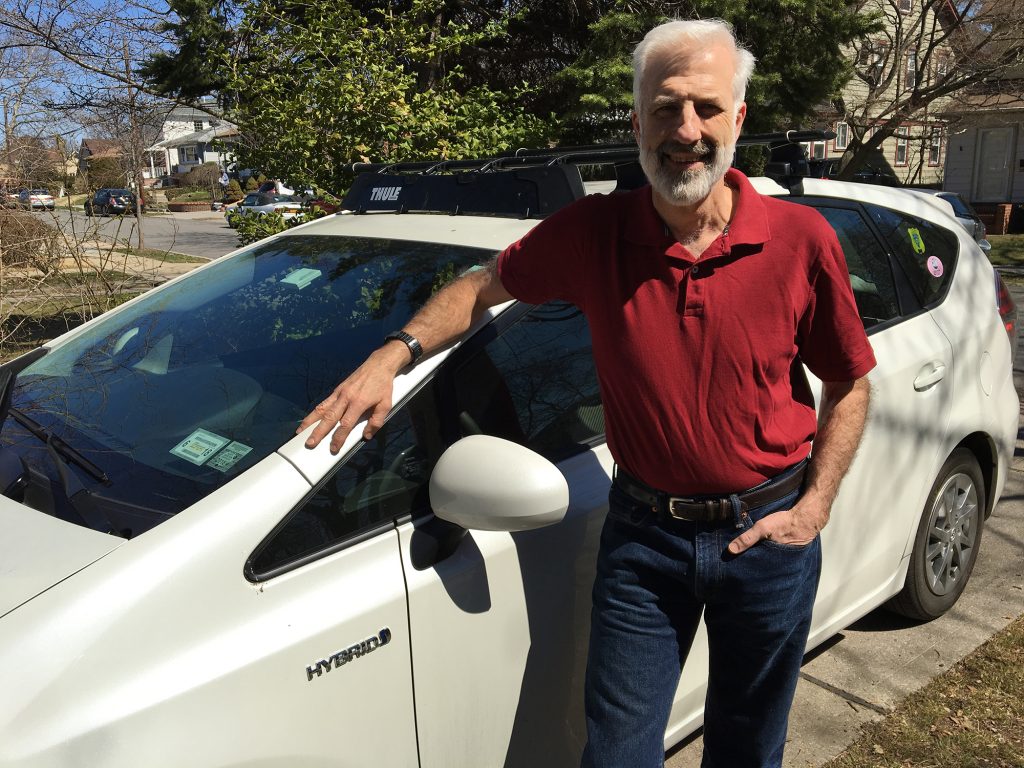 Walter Mugdan, who lives in a New York City suburb, makes en effort to be eco-conscious. He drives a hybrid vehicle, recycles, and doesn’t overheat his house. Then he offsets the rest of his carbon footprint by buying carbon credits. (Courtesy of Walter Mugdan)

He gives about $300 to a company that invests that money in projects to reduce or recapture greenhouse gases in an amount equivalent to what his family emitted during the year.

There are lots of different projects your ‘indulgence’ can support. Carbon offset money helped expand a wind turbine project in Oklahoma. In New York, there’s a landfill that now has equipment to catch its methane gas. In Peru, there’s a project to protect a forest.

Since climate change is a global problem, it doesn’t really matter where carbon dioxide reductions happen. Projects outside of the United States tend to be cheaper to implement.

“So you’ve got places in the world, usually more developing countries where they might use indoor fires to cook their food. That has a lot of really terrible effects on the family and breathing and all that smoke on the environment. The type of fuel that’s used, sometimes that caused deforestation nearby,” says Kelley Hamrick, who analyzes voluntary carbon offset markets for Ecosystem Marketplace, a publication about market-driven approaches to conservation. A common offset project is to provide communities with cleaner burning, more efficient cookstoves, reducing emissions as well as improving health for the recipients.

Hamrick estimates that, in 2016, these kinds of projects reduced carbon dioxide emissions by about 60 million tons. (That number could be slightly higher because not all offset companies responded to her survey.)

That same year, globally, we emitted more than 35 billion tons of carbon. In other words, voluntary offsets take care of less than 1 percent of what we emit globally.

What to look for

The biggest thing to look for when purchasing offsets is something called additionality, which means a given project would not have happened without the money people are paying to offset their carbon emissions. This gets tricky because, like any development project, offsets often have many sources of funding. It can be hard to determine if the offset funds were really necessary, or if the developers are just taking advantage of a relatively new funding source.

Whether you’re offsetting exactly how many tons you’re paying for can also be a tricky question. How much carbon is offset can be easier to calculate in some projects than others.

“There are a lot of things out there that could have a climate change benefit but for which we don’t have the science or the quantification or the measurement to establish solid standards about how you would go about doing that measurement,” says Derik Broekhoff, senior scientist at the Stockholm Environment Institute.

For example, some companies are considering a relatively new type of offset: changing up cows’ grazing practices. By tweaking factors like how often the animals move from pasture to pasture, researchers think they can increase how much carbon is captured in the soil. For now, there’s not enough research to calculate exactly how much carbon would actually be offset.

“The risks are too high” for commercial investors, says Native Energy’s Kirsten McKnight, who is working on developing a soil carbon capture project in Montana. She says Native Energy, a carbon offset company, seeks out such projects with the goal of clarifying the science and mitigating the risks for potential investors.

“Ultimately the goal would be that carbon is not needed at all for any of these projects,” she says.

But, even with incomplete data, McKnight says there are enough benefits to try innovative offset strategies. Many offset projects promise benefits beyond the tonnage of carbon held back from the atmosphere. For example, clean cookstoves promote women’s and children’s health, while a forestry project could also benefit endangered animals.

Uncertainty shouldn’t stop people from caring, says Marisa de Belloy from Cool Effect. “We are causing these problems. We are the ones putting the carbon into the atmosphere, so we should be the ones to reduce it.”

More segments from Shades of Green

Only Joni: Choosing one child

Chickpea soup for the planet

For decades, PFAS (per- and polyfluoroalkyl substances) have tainted the water, air, and soil — in the Delaware Valley region and across the country.

Is trying to recycle plastic a waste? Meet the scientists working to find new solutions

We can design and make amazing things with plastic; it’s much harder to un-make them.