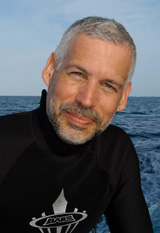 In his blog post on Earth Day 2011, marine scientist David Guggenheim wrote about a little known ship wreck in the middle of the South Atlantic Ocean that wreaked environmental havoc around Tristan da Cuhna, a volcanic group of island located 1,500 miles from Cape Town South Africa.  The islands are a “bird-lovers dream” and as a result of  the wreck, tons of heavy crude spilled into the ocean threatening the population of rockhopper penguins, an endangered species that has been dramatically declining since the 1950’s.   Guggenheim used this story and his work there to highlight the growing concern among environmentalists that such incidents are having a dramatic impact on the health the world’s oceans.  He is also involved in similar efforts in the Gulf of Mexico where is working on a recovery project in New Orleans to design  and create a sustainable acquaculture that was destroyed by Hurricane Katrina and the BP Oil spill.   Guggenheim is the founder of of 1 Ocean, 1 Planet and is a Senior Fellow at the Ocean Foundation. He is currently on a 50-state tour to develop an interest in ocean exploration and conservation among young people.  He joins us in the studio to talk about the state of the world’s oceans.