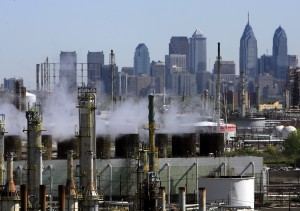 The future of United Steelworkers’ (USW) jobs at local oil refineries futures looked bleak last September when Sunoco announced plans to sell or close their South Philadelphia and Marcus Hook facilities. Later that month ConocoPhillips announced plans to sell or permanently close its Trainer, Pa. plant. Good news came in June as the Trainer plant was going to be sold to a Delta Airlines subsidiary, Monroe Energy LLC. Our guest, DENIS STEPHANO, President the USW Local 10-234 of the Trainer/Monroe refinery, says that while about 30 workers left for other employment during the closing of their plant, almost 180 workers will keep their jobs. Delta officials see as many as 400 people working at the Trainer site. Earlier this month the investment firm, The Carlyle Group and Sunoco Inc., sealed a deal to buy the South Philadelphia plant, which when the sale is closed, will be known as Philadelphia Energy Solutions. Another of our guests, JIM SAVAGE, President of USW local 10-1, characterized the mood of the 850 workers at the South Philadelphia refinery, upon hearing this news, as “It’s like Christmas. Everyone is staying.” DAVID MILLER, President of USW Local 10-901, who was employed at the Marcus Hook refinery for 25 years, has a different story. Sunoco idled this plant, open since 1892, in December of 2011. Miller is one of 360 union employee and hundreds of private contractors seeking new employment. About 80 Sunoco employees have remained at the plant, winding things down, purging lines, and dismantling units. So far, there are no buyers for the entire Marcus Hook plant, but petrochemical plant, Braskem America, announced this week they are acquiring part of the site. We’ll speak to the three local USW union leaders about their fight to negotiate the jobs of their workers and what this means to the future of the American Union.