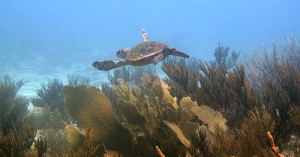 All the Earth’s seven sea turtle species are endangered. The United States waters are home to six of the species, including the Gulf of Mexico, where the 2010 BP oil spill devastated much of the turtle population. Fishing, climate change, tourist density and coastal manufacturing have been closing in on the habitats of turtles throughout the last century and actions of conservationists like our guest, Drexel University biologist and ecologist JIM SPOTILA, help to slow the decline of turtles in the 21st century. Spotilia has been working over 30 years in turtle conservation and his new book is Saving Sea Turtles: Extraordinary Stories from the Battle Against Extinction, which tells stories of saving turtles from egg poaching; limiting coastal development; establishing laws and enforcing oil drilling safely in the world’s oceans; and eating less wild marine life.