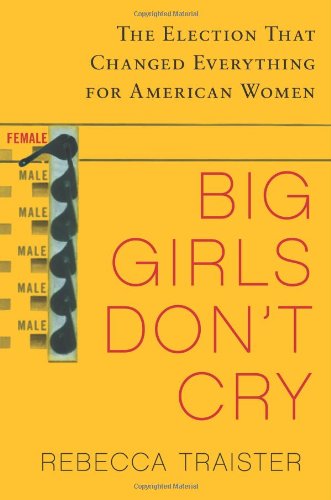 Weeks before the mid-term elections, we’re joined in studio by Salon senior writer REBECCA TRAISTER, who will discuss her new book, Big Girls Don‘t Cry: The Election that Changed Everything for American Women. In it, Traister captures a play-by-play account of the 2008 presidential campaign, as she and her peers ponder the unprecedented prominence for gender and racial issues in American politics as Barack Obama and Hillary Clinton vied to become the nation’s first major-party presidential candidate from their respective demographics. Traister is in Philadelphia to take part in Vision 2020, a national project focused on advancing gender equality by energizing the dialogue about women and leadership. And she and Marty will also discuss the raft of intriguing Republican women on ballots across the country – including Delaware Republican Senate candidate Christine O’Donnell, Sharron Angle, Nikki Haley, Meg Whitman, Carly Fiorina, & Michele Bachmann – and the original Mama Grizzly NOT on this year’s ballot, Sarah Palin.