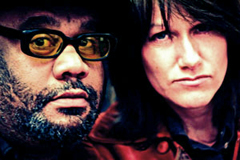 Meet Stew, composer and star of the 2008 Tony Award-winning musical “Passing Strange,” and subject of a Spike Lee documentary of the same name. Passing Strange is a semi-autobiographical, coming-of-age journey of the musician Stew, from his home in middle-class Los Angeles to Europe and back, as he finds his artistic voice. Stew is also the name of the band Stew shares with songwriting partner, Heidi Rodewald. Heidi and Stew’s other rock band is The Negro Problem, which will perform at the World Café Live as part of the Philly Fringe/Live Arts Festival Monday, September 13th with songs from “Passing Strange,” new songs from a BAM commission – “Brooklyn Omnibus,” and some samples of their forthcoming musical, “Making It,” based on Heidi and Stew’s romantic break up.

Benjamin L. Bynum Sr. was a longtime Philadelphia entrepreneur and patriarch of a family associated with popular restaurants and jazz and blues venues in the city.