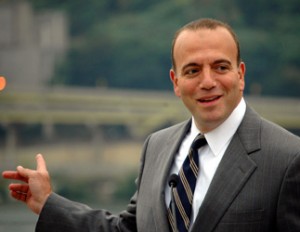 DAN ONORATO is the Democratic candidate running to be Pennsylvania’s next governor. The Allegheny County executive is touting his economic record, claiming some credit for the turnaround in Pittsburgh that convinced President Obama to choose the Steel City to host last year’s meeting of the G-20 economic summit. But he faces many challenges, starting with national polls suggesting heavy Republican turnout and finishing with a Franklin & Marshall poll released just yesterday that found Onorato still trailing his Republican opponent, Pennsylvania Attorney General Tom Corbett, leading by 3 to 4 percentage points. Onorato hopes to close that gap by informing the public about his positions and track record, as well as those of his opponent. He’s today’s guest on Radio Times.

Piedmont, a subsidiary of American Airlines, is a regional carrier with hubs in Philadelphia and Charlotte that flies to more than 55 cities around the United States.

The “Great Resignation:” why Americans are quitting at record levels

Americans are quitting their jobs at record levels. In August, 2.9% of workers resigned to take new jobs or to stop working altogether. What's behind the "Great Resignation?"