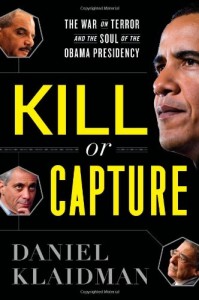 The Obama administration is facing mounting criticism for its use of armed drones to kill suspected terrorists in foreign countries.  A recent op-ed by former President Jimmy Carter in The New York Times pointed to a number of human rights abuses carried out by the current administration, including the targeted assassinations, the failure to close the detention center at Guantanamo Bay, and privacy violations like warrantless wiretapping.  Besides employing drone strikes in an unprecedented way, President Obama has also used cyber warfare against enemy nations like Iran.  But there are many who defend the President’s use of these 21st century tactics in the battle against terrorism. This hour, we’ll talk to journalist DANIEL KLAIDMAN, about Obama’s shadow war. Klaidman is the author of “Kill or Capture: The War on Terror and the Soul of the Obama Presidency.”