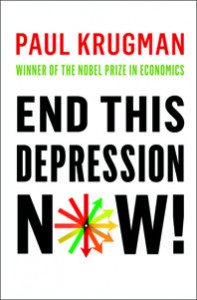 The United States economy isn’t recovering from The Great Recession quickly enough for Nobel laureate economist PAUL KRUGMAN. The U.S. unemployment rate is hovering just over 8 percent, when in 2007, the beginning of the financial crisis, according to Krugman, it didn’t spike above 5 percent. The New York Times columnist, blogger and Princeton professor of economics believes we need a governmental jump-start to offset the country’s high inflation and growing deficit. He walks us through the financial crisis that triggered the steepest economic downturn since the Great Depression, and the flaws he sees in the decisions made by President Obama, former Federal Reserve Chairman Alan Greenspan, current Federal Reserve Chairman Ben Bernanke and former Treasury Secretary Robert Rubin, among others. Krugman has recently been responding to the $3 billion-and-growing loss by the nation’s largest bank, JP Morgan Chase, calling for restoring the federal safeguards that, he says, kept the 20th century relatively financially stable. He’s also been looking at what the past few years of austerity measures and a depressed economy in Greece mean for the rest of us. Paul Krugman’s new book is “End this Depression Now!”

The head of the World Health Organization called Friday for patent rights to be waived until the end of the coronavirus pandemic.

A business owner’s guide to Pa.’s next wave of COVID-19 relief grants

The aid is targeted at businesses with fewer than 300 employees that have lost at least 25% of their sales as a result of the pandemic.

Temple University will begin the 2021-2022 academic year primarily in-person, with a “substantial” number of students returning to campus.