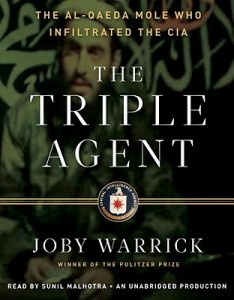 On Dec. 30, 2009, a team of the CIA’s top terrorist hunters were waiting at a secret, fortified base in Afghanistan near the border with Pakistan. They were about to meet one of their most prized moles inside the al Qaeda terrorist network, a Jordanian doctor named Humam Khalil Abu-Mulal al-Balawi, who the agents believed was their best chance to get close to Ayman al-Zawahiri, the Egyptian doctor who was Osama bin Laden’s top deputy. But, as Washington Post national security reporter JOBY WARRICK recounts in his riveting new book, the double-agent proved to be The Triple Agent: The al-Qaeda Mole who Infiltrated the CIA. Al-Balawi set off a 30-pound suicide bomb that fateful day and killed himself, seven CIA employees and several other Afghani employees working with the CIA. Warrick’s book explains the systemic errors that led to the world’s top spy agency suffering its worst single-day loss in its history, and the tumultuous effort to stop al-Qaeda the caused cascading errors of judgment and analysis.

Russian bounties for US troops in Afghanistan

How should the U.S. respond to reports that Russia paid bounties to Taliban militants to kill U.S. soldiers in Afghanistan?