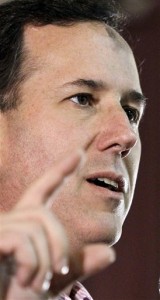 Widely considered an underdog in the early days of the Republican presidential campaign, Rick Santorum is surging in the national polls and is expected to pose a real threat to Mitt Romney in Romney’s home state of Michigan next week. Santorum’s controversial statements on religion, feminism, abortion, prenatal testing and public education have garnered the support of social conservatives, Tea Party members and Evangelicals. On the campaign trail, at his town hall meetings, he speaks off the cuff, mingles with the crowd, and is eager to take on difficult policy questions. Yet his candidacy has moderate Republicans concerned for the future of their party and their chances to better President Barack Obama in the general election. What is it about Santorum that resonates with some Americans? What do his previous election battles in Pennsylvania tell us about the likelihood that he could go all the way to the White House? Will his outspoken views on a variety of social issues hurt him or help? Joining us are WILL BUNCH, senior writer at the Philadelphia Daily News; ROBERT COSTA, political reporter for the National Review; and MICHAEL YOUNG, co-author of the twice-monthly Politically Uncorrected.