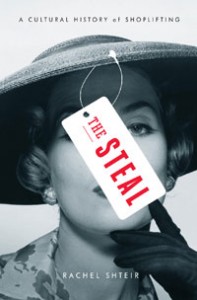 It’s called the “five finger discount” and it’s been around for centuries – Plato, Zeno and St. Augustine all had thoughts on shoplifting.  In her fascinating new book, The Steal: A Cultural History of Shoplifting, writer RACHEL SHTEIR traces the modern origins of shoplifting to Elizabethan England, when pilfering from stalls and shops became commonplace, so much so that by 1699 England’s Parliament enacted the Shoplifting Act — anyone who stole more than five shillings worth of goods was sentenced to death.  These days the law has become more lenient — Winona Ryder was sentenced to 480 hours of community service for trying to nab thousands of dollars in clothing from Saks Fifth Avenue.  This hour, Marty talks with Shteir about the history and psychology of shoplifting.  What’s behind the compulsion?  And, we hear about the latest in surveillance technology that is battling the 27 million Americans with sticky fingers.

Kim Potter is charged with manslaughter in Wright’s death in April in Brooklyn Center, a Minneapolis suburb.

A Cultural History of Shoplifting