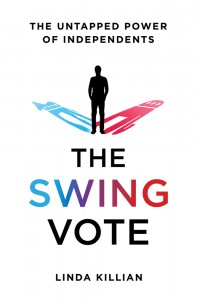 Forty percent of the American electorate is made up of independent voters, and their ideologies are in the middle of the political spectrum, according to journalist LINDA KILLIAN. These significant voters, who can decide national elections, aren’t reliably conservative nor liberal – many have never registered with a party and others are former Democrats and Republicans who have become disillusioned with their party’s position on policies. She writes 2.5 million voters have left the two major political parties since 2008. Covering politics her whole adult life, she wanted to know why they’ve been left out of the electoral process. In her new book, “The Swing Vote: The Untapped Power of Independents,” Killian breaks down the four different kinds of independents voters and how the Obama administration failed to bring partisanship to Washington. On today’s Radio Times, we’ll also look at Pennsylvania’s role as a swing state in the upcoming presidential election.