Enrollment at Pennsylvania’s state universities once again took a downward tumble for the ninth consecutive year, dropping by 2.6% from last year.

With 95,802 students enrolled, the State System of Higher Education now has about the same enrollment as it had 20 years ago, according to the official fall semester student count released on Tuesday.

Declines were reported at 10 of the schools while the remaining four – Cheyney, Mansfield, Millersville and West Chester universities – all experienced increases from the prior year.

The school that saw the greatest growth was Cheyney University, a historically black university located in Chester County that has been battling enrollment declines for most of the past decade. It saw its enrollment swell by 149 more students from last year, for a total student count of 618 – or about 40 percent of the 1,586 students it enrolled in 2010.

Granted, Cheyney remains the lowest enrolled school in the system but this is the first enrollment surge of well over 100 students it has seen in at least a decade if not longer and is said to be reflective of its President Aaron Walton’s “shrink to grow” policy.

“Cheyney deliberately and dramatically reduced its enrollment after President Walton assumed his role in 2017. Cheyney has also eliminated its past practice of open enrollment and now adheres to a stringent admissions policy, emphasizing high-achieving students. Cheyney has similar enrollment increases projected for the next two to three years” said university spokesman Kirk Dorn.

Much of Cheyney’s growth is attributable to its larger freshman class that has 213 students compared to 102 in last year’s first-year class, he said. Additionally, 70 percent of last year’s freshmen returned this year which is a 20-year high, Dorn said.

This comes at a time when Cheyney had to conduct fundraising campaign to balance its budget this year as it awaits a decision on Nov. 21 from Middle States Commission on Higher Education as to whether it will be allowed to keep its accreditation. Losing its accreditation would mean its students would be cut off from participating in federal aid programs, which the vast majority of them depend on to pay for college.

Meanwhile, a short distance away sits the largest of the 14 system schools – West Chester. It saw an uptick of 139 students since last year bringing its total enrollment to 17,691. Millersville University experienced a much smaller increase of 36 students, for a total of 7,817, while Shippensburg University saw a decline of 312 students, dropping its enrollment to just shy of 6,100. 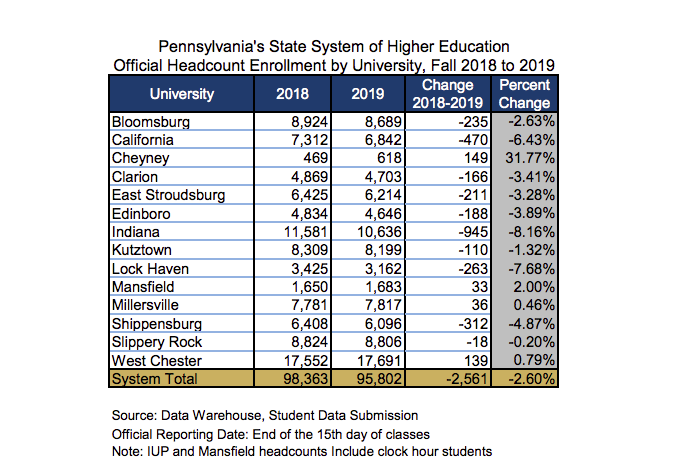 Systemwide enrollment has been declining since 2010 as the number of high school graduates in Pennsylvania and nationwide, particularly in the Northeast, continues to drop. But system officials, who are in the midst of redesigning the system to makes its universities financially viable going forward in spite of this demographic trend, are trying to find a silver lining.

“One of the conversations we’ve been having with the universities is how we have the opportunity to be among the first who can reimagine what public higher education is going to be going forward because we feel these challenges acutely,” said system spokesman David Pidgeon.

Among the areas that it is focusing on to reverse the enrollment decline include trying to attract more adult learners and, as Cheyney indicated it is doing, focusing on increasing its retention rate.

“Chancellor [Dan] Greenstein has made this a vital part of our system redesign and the strategy going forward, to look at how can we serve students who start at our universities and help them see through the process until they have a degree,” Pidgeon said.

For the system, though, the big takeaway from this enrollment report is that it underscores why the system redesign is underway and how making sure its schools remain affordable and accessible at all points in Pennsylvania must continue to be a focus, he said.

Cheyney University is keeping its accreditation

Cheyney University will keep its accreditation, state leaders and university administrators announced in a letter to faculty, staff and students on Monday.

Future of Cheyney at stake ahead of final school accreditation decision

Cheyney University has run out of lifelines and delays over the status of its accreditation.

Leaders of historically black colleges and universities shared ideas for raising funds during challenging times at a forum hosted by Del. State University.