The blue “It’s a boy!” balloons were starting to pucker and wilt in Devon Whitley’s Phoenixville apartment.

But their message is moot now that little Noah is 7 weeks old, his healthy wails announcing his presence to Chester County.

Unmarried, Whitley just turned 30 and lives about $2,000 below the federal poverty line of $16,460 for a family of two on food stamps, as well as on disability payments for severe Crohn’s disease.

Taken from her parents at age 6, she grew up in foster care and poverty, absorbing beatings and sexual assault while developing an overwhelming pessimism that her future could be only pinched and dismal.

But lately, Whitley began to believe that a “beautiful baby” would confer joy even after her boyfriend shape-shifted into a ghost.

So when she got pregnant, there was no abortion, no talk of adoption. She said, “I thought a baby could make my life better.”

Whitley is part of a growing trend among unwed, low-income white women, whose birthrate has been growing faster than that of any other racial group, according to data experts and sociologists.

“But the fastest shift in this demographic is whites, driving the trend.”

While the white rate is accelerating, overall numbers for nonmarital births among minorities are higher. For example, 70 percent of births in the African American community are to unmarried mothers, a rate that hasn’t changed since the early 1990s. Among Latinas, it’s 53 percent. 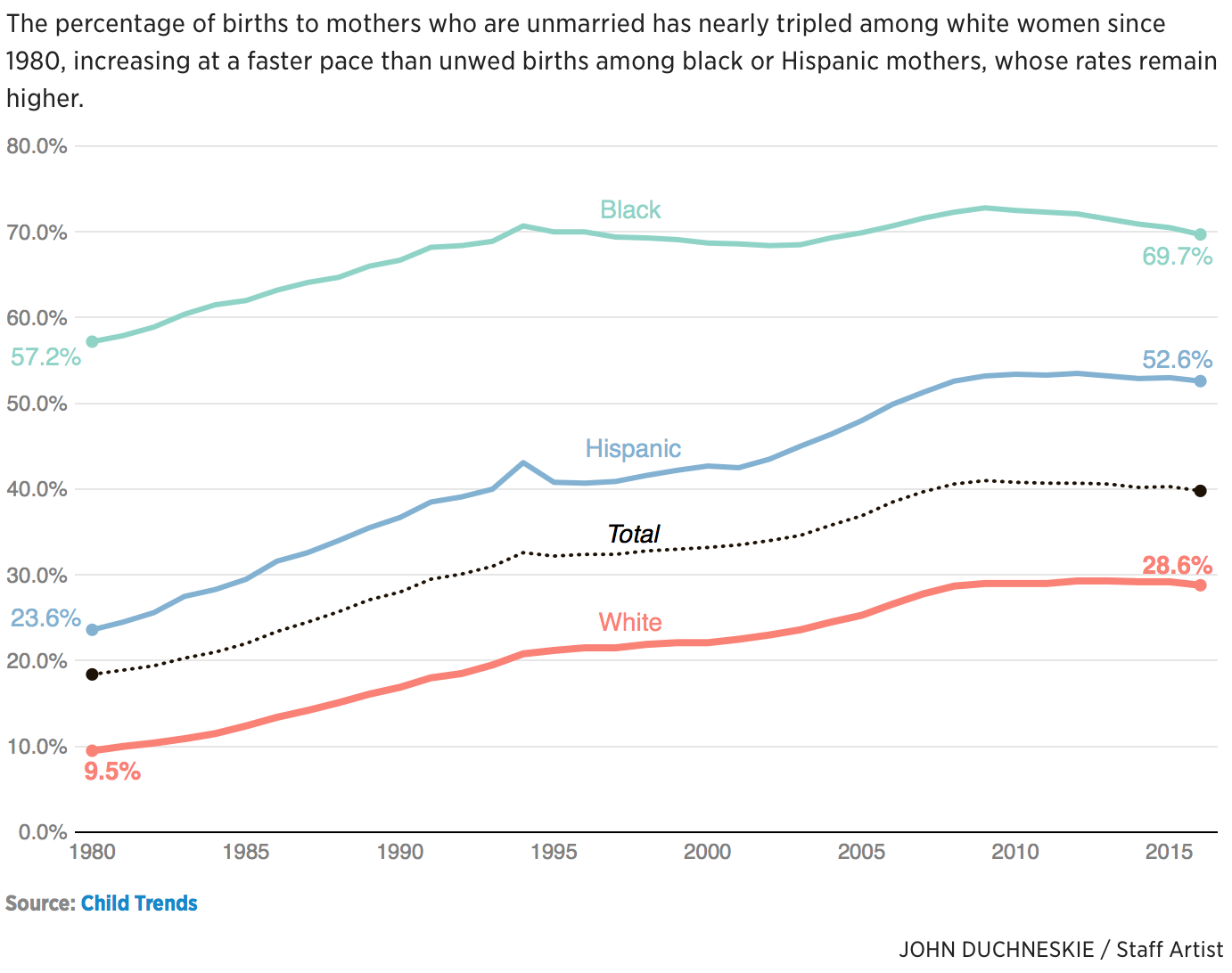 It’s important to remember, Kefalas said, that nonmarital births are a function of class, not race. Because many U.S. minorities live in poverty, you’ll see higher percentages of single parents among them.

In Philadelphia, poverty among minority groups stalled or decreased between 2016 and 2017, but poverty among whites shot up from around 15 percent to more than 19 percent, according to U.S. Census figures released in September.

Throughout America, white workers have suffered stagnation or declines in wages and status over the last 30 years, thanks to downsizing, outsourcing, and automation that have led to the loss of well-paying, blue-collar jobs. The humming economy is not delivering for many working-class people, experts say.

“It’s becoming harder for whites to make it,” said sociologist Karen Benjamin Guzzo of  Bowling Green State University in Ohio. “What’s happening to them is what happened to disadvantaged minorities decades ago.”

As a result, white working-class and rural voters without college degrees are more pessimistic about their future than any other group, CNN reported in a 2016 survey.

“Less educated white Americans have a loss of hope, and you’re seeing them fall downward, with more opioid use,” said historian Stephanie Coontz of Evergreen State College in Olympia, Wash. “It’s a demoralization that makes people unable to sustain relationships, making marriage not a good bet.”

As with low-income minority women, many disadvantaged white women believe they’re better off having babies and cohabiting with men, or simply living on their own, than marrying men who are suffering economically, experts say.

Misunderstood as reckless people who use babies to leverage welfare cash, many single mothers actually are making rational decisions, based on meager circumstances and limited choices, experts say.

“There’s an economic basis for marriage, and if both spouses can’t earn livings, it takes away the underpinning for marriage,” said Deborah Weinstein, executive director of the Coalition on Human Needs, a Washington nonprofit that focuses on poverty.

“But it doesn’t take away the longing for children. So, children will be born in the absence of marriage.

“To us it’s clear, then, that poverty causes unwed motherhood.” 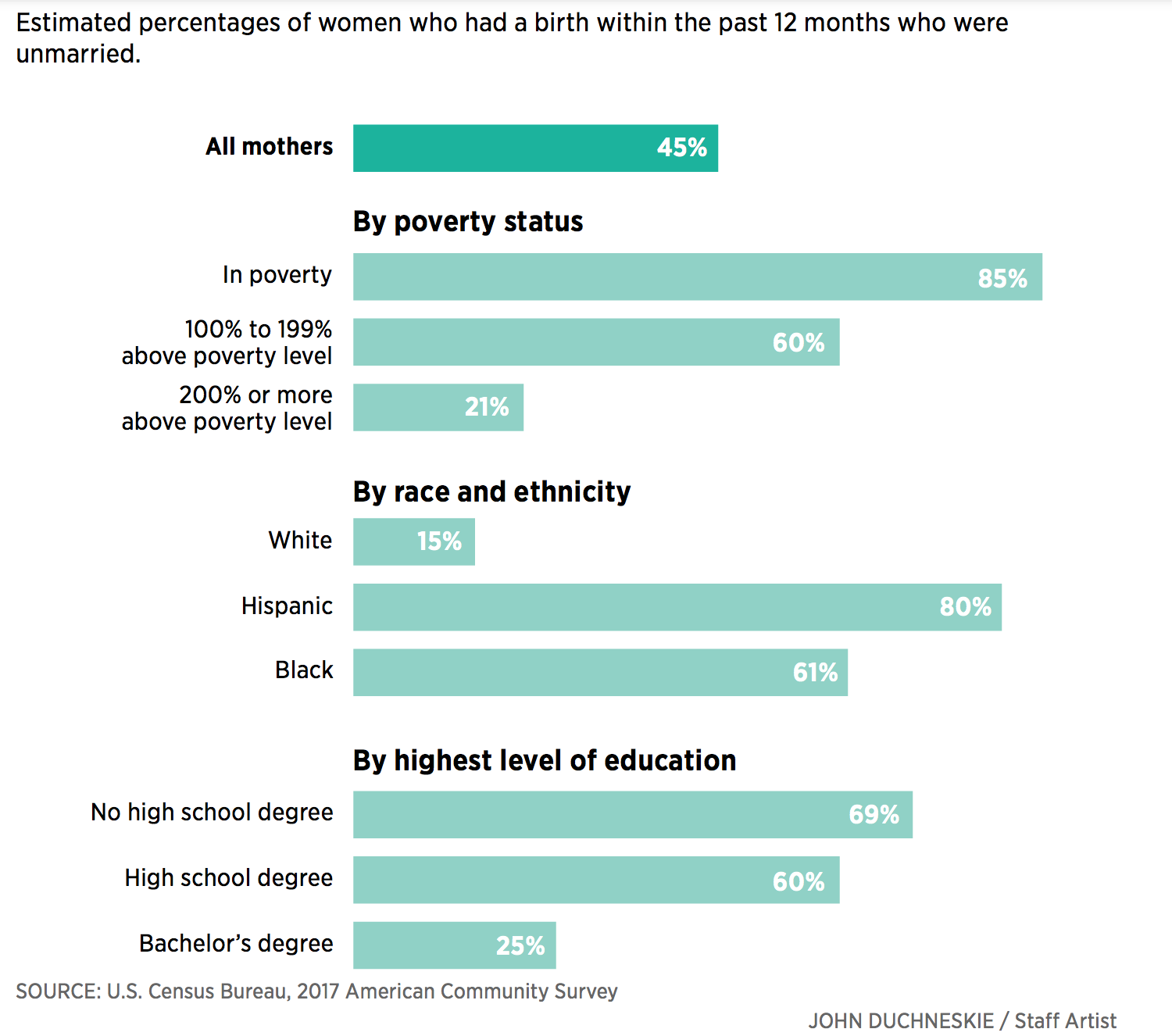 A piece of the dream

Throughout America, the average age of unmarried moms is 21, statistics show.

For non-college-educated, low-income women in their 20s and 30s, however, the daily chaos of unreliable work hours and negligible pay undermines hope and any sense of control, said sociologist Joan Maya Mazelis of Rutgers University-Camden. There’s no payoff for life planning, for being careful.

By having a baby, low-income women of all races wrest something wonderful from a mean existence. They can’t have the whole American dream, but they can grab a piece.

“These women have few opportunities to craft an identity,” Edin of Princeton said. “Child-rearing becomes the only game in town.”

That’s how it was for Erica Valez, 23, a Latina single mother of a 5-year-old girl in West Philadelphia. She was born into “survival-mode” poverty, as she puts it, living homeless with two parents in prison. A baby seemed like an antidote to a toxic life.

Paradoxically, a child can bring stability. “Women say, ‘The baby stopped me from drinking, gave me purpose,'” Edin said.

A baby outshines any career plans, said Loretta Stephens, 56, an African American woman living in North Philadelphia.  A former medical secretary now living on disability, Stephens had three out-of-wedlock daughters. “I didn’t feel lost when I turned down a secretary job for the FBI when I first got pregnant,” Stephens said. “One door closes, another opens.”

A Pennsylvania woman living alone can get $205 a month for cash welfare, but she’d have to be in deep poverty. Only one in 10 low-income people qualifies for welfare. If that woman has a child, the monthly stipend would rise to just $316. And there are work requirements and time limits.

Because single mothers with children are 14 percent more likely to be in poverty than other families, critics say, the women would be better off marrying.

Unmarried mothers and poverty in Philadelphia 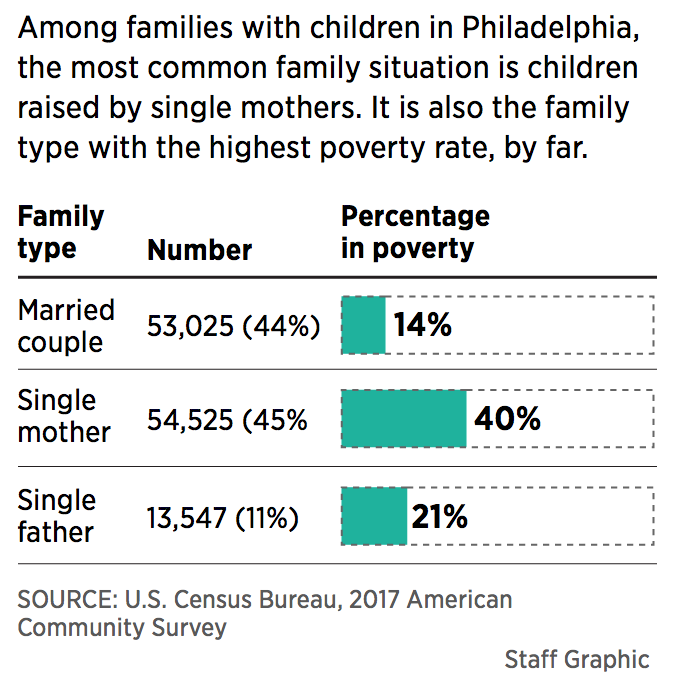 But, writes University of California sociologist David Brady, reducing single motherhood would not substantially reduce poverty, since just 8.8 percent of people lived in single-mother households in 2013.

Middle- and upper-class women are indoctrinated into believing that having a baby before marriage derails college and career, said Rebecca Maynard, a professor of education at the University of Pennsylvania.

That’s why higher-income women use contraception more consistently, she said. “The rate of sexual activity is the same” among all people, regardless of race or class, Maynard added. “It’s not like suburban kids are goody-two-shoes.”

This doesn’t mean low-income women don’t get abortions, she added: “They will later in life with a third or fourth pregnancy, when they don’t want more kids.”

What’s difficult to see, Kefalas and others said, is that low-income women are not anti-marriage. “In fact, they revere it,” she said.

A disadvantaged woman is twice as likely as an educated woman to say it’s “very important” for a man to provide a good income to qualify as marriageable, according to the historian Coontz.

At YoungMoms on East State Street, however, things are more nuanced.

The agency teaches life and parenting skills to teen mothers. Most of the young women that YoungMoms helps are low-income Latinas.

Bridget Kirkner, 27, was one of the agency’s few white teenage mothers. A miscalculation with birth control got Kirkner pregnant at 17, after her father had kicked her out of the house in the midst of family troubles.

The product of a middle-class home, Kirkner had been an excellent student on her way to a major university. Pregnancy altered her trajectory, but, she said, YoungMoms helped her finish high school and attend West Chester University.

“I was terrified,” Kirkner said. “But I had my daughter, and now I realize I’m better off for it.”

She graduated and today she’s a registered nurse, married to a man she met after her daughter was born.

Kirkner said she saw how different her middle-class perch was than that of her cousins, some of whom are lower-income Latinas.

For them, “having a family is the only dream, the one goal,” said Kirkner, who serves on the board of YoungMoms now. “They’re not necessarily planned kids, but they want families.

“I wanted a future.”

Trying to sign up for the coronavirus vaccine in Bucks, Berks, Chester, Delaware, Montgomery, or Philadelphia counties? WHYY has answers.

The “vax-a-thon” was Philly’s first 24-hour vaccine clinic and the Black Doctors COVID-19 Consortium surpassed their vaccination goal before midnight.

The field of home health care has suffered added pressures during the pandemic. Experts caution that the vaccine rollout will not solve underlying issues around wages.