Five years on, the Office of Community Empowerment and Opportunity has spent $65 million with few measurable accomplishments.

The office says it helps people get benefits, open bank accounts, improve their credit scores, and hosts antipoverty community programs. But much of its budget is spent on staffing — including an executive director with a scheduler and special assistant — and it has been plagued by nearly constant staff turnover. The office, moreover, has never really had the clout to implement antipoverty efforts across city government.

And new census data released this week offered a familiar, and sobering, bottom line: As the national poverty rate has dipped, to about 13.4 percent, Philadelphia’s has hovered around 26 percent, the highest rate among the 10 largest U.S. cities.

Under Mayor Kenney, the agency lost two of its core responsibilities — early childhood education and job creation — which were moved to new offices. People who have worked there say the agency, previously called the Mayor’s Office of Community Services (MOCS), has no authority.

“Right now, we have 26 percent poverty rate and no direction. From anyone,” said Otis Bullock Jr., a nonprofit director who served as head of the agency when it was called MOCS. He advocates a cabinet-level position to oversee city antipoverty efforts.

The city, under various mayors, has not put enough “skin in the game” when it comes to funding the antipoverty office, Bullock said. The office has a $14 million budget, most of which comes from the federal government.

The city put in $2 million last year but has since dropped its contribution to $500,000.

Kenney, through a spokesperson, said that the city’s antipoverty agenda is “comprehensive” and housed among various departments.

“Looking at just the funding for one city department is insufficient to gain an understanding of the city’s efforts,” spokesperson Deana Gamble said.

The city’s Office of Community Empowerment and Opportunity, a community-services office rebranded by Mayor Nutter in 2013, spent $10.5 million in fiscal 2018 on contracts with outside vendors, but struggles to have a measurable effect on Philadelphia’s poverty rate, which remains the highest of the nation’s 10 largest cities. 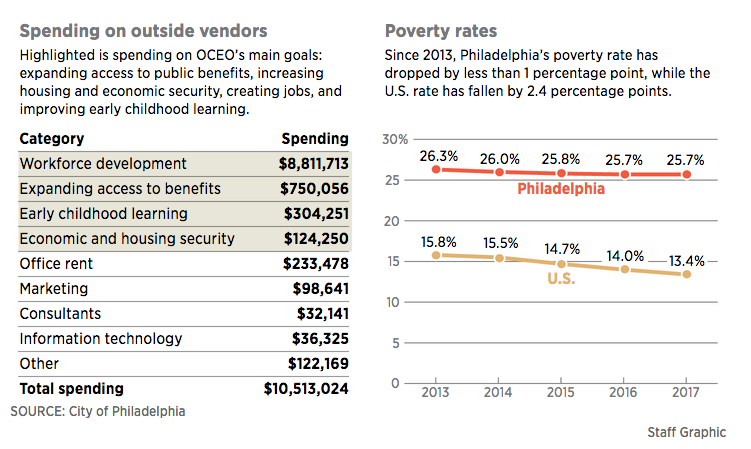 The Office of Community Empowerment and Opportunity oversees programs tied to the five-prong approach to combat poverty listed in Nutter’s 2013 Shared Prosperity plan: expanding access to public benefits, increasing housing and economic security, creating jobs, and improving early childhood learning. The agency has existed, under various names, since 1964, when it launched as part of President Lyndon B. Johnson’s “War on Poverty.”  It serves as the city’s Community Action Agency, which receives federal block grants.

By its own measures, the office is falling short. Out of the 25 goals listed in the 2013 Shared Prosperity antipoverty plan, four were listed as complete in the 2017 annual report and two of those had no clear connection to the office: the addition of more than 1,700 hospitality jobs and more than 25,000 new jobs overall in the city.

The office says it helped 4,720 people — about 1 percent of the city’s poor —  sign up for benefits, 99 people improve their credit score by at least 35 points, and 45 people open bank accounts in the fiscal year that ended June 30. It also hosted 10 roundtable events with nonprofit groups to discuss antipoverty efforts, which usually drew a few dozen people.

People who have worked at the agency say ideas from the roundtables are not followed up or measured.

“There’s no strategy,” said one former staffer. “It’s just for the sake of getting our name out there.”

The agency’s biggest contract is a $7 million pass-through of funds from the state to the Jewish Employment and Vocational Service for a Work Ready program. The nonprofit group helps people on welfare and who are low-skilled find jobs.

A spokesperson from the vocational services agency said the Work Ready program focuses on getting participants volunteer positions so they can build their resumés and ultimately get a job. Last year the agency placed more than 1,200 people in an internship or volunteer position for at least a month. But it helped only 108 get jobs.

When that number was presented at a CEO oversight board meeting a few months ago, some attendees were shocked.

“If we gave them a down payment on a house or car, they would be much better served,” one said later about the use of $7 million. “Or why don’t we make sure everyone’s dental work is up-to-date?”

The second-largest chunk of money in the office’s budget — $2.4 million — goes to salaries and benefits for its 35 employees.

Mitch Little, the executive director, has a $130,000 salary, a scheduler ($40,000), and a special assistant ($55,000). In addition, Little spent $160,000 last year on outside marketing and consultants, including people to write speeches for him and to provide executive coaching.

Some people who have worked under Little say the office and its leader lack an overall strategic vision.

“I don’t think that there is a concise, clear, and accurate way to describe the purpose of the office,” said a former employee, who like others interviewed for this story requested anonymity for fear of retribution. That person added that high attrition — 26 people have left the 35-person office since early 2017 — is in part a result.

Asked to respond, Little brushed aside “anonymous allegations” and argued the office has been a success.

“I don’t think anywhere else in government has our unique perspective and our skill set,” Little said. “We collaborate, we convene, we fund initiatives, and we pilot. All for a particular population. And so, I think there’s a value added not only to government but to sort of the universe here.”

Although most of the work is contracted out, some access to public benefits is done in-house by four staffers, six others oversee accounting and contracts, and a few run smaller programs, such as Promise Corps, which matches more than 1,000 high school students in the city’s Mantua section to 25 AmeriCorps members for college and career-readiness coaching.

Leslie Benoliel, president and CEO of Entrepreneur Works and a member of the office’s oversight board, said that the agency has made “huge strides” in coordinating with other nonprofits and city departments.

“There are a lot more players around the table talking and coordinating that’s led to some good programming,” Benoliel said.

Councilwoman Maria Quiñones-Sánchez, who sits on the agency’s oversight board and represents Fairhill in North Philadelphia, the poorest neighborhood in the city,  said that the office doesn’t have any clout, making it hard to implement ideas.

“The office has access to the right people. It does not have access to all of government or any influence,” she said.

Judith Levine, a sociology professor at Temple University, said the nature of poverty itself is part of the problem.

“There are a lot of disappointing findings in antipoverty programs in general because it’s so multifaceted,”  Levine said.

The Inquirer and Daily News sought to compare Philadelphia’s spending and efforts with other midsized or large cities. But in at least some of them — Atlanta, Baltimore, Cleveland, and Miami —  a comparison wasn’t possible because many of them don’t have a separate office or staff dedicated to antipoverty programs.

The only way to significantly reduce poverty, Levine said, is to improve education, adding that public prekindergarten for low-income families is one of the best long-term investments.

Early education has been the most visible part of Kenney’s social services agenda. But it will be a while until that makes an impact on poverty rates.

“We’ve come down a bit,” Levine said, referring to Philadelphia’s peak poverty rate of 28.4 percent in 2011. “Does it mean there was some huge change in Philadelphia in the face of poverty? I think the answer is clearly no.”

Philadelphia Media Network is one of 21 news organizations producing Broke in Philly, a collaborative reporting project on solutions to poverty and the city’s push towards economic justice. See all of our reporting at brokeinphilly.org.

Philadelphia is the first major city to ban cashless stores. But anti-poverty advocates and low-income residents never asked for it.

5 smart lessons about investing to end poverty in Philadelphia

Technical.ly traveled to Albuquerque, N.M., to find what has worked — and what hasn't — in that city's approach to workforce development.